Violence broke out Tuesday night on the eve of a massive pro-Trump rally in Washington, DC. The violence happened as police blocked the crowd of Trump supporters from entering Black Lives Matter Plaza.

The normally pro-police demonstrators became angered as the officers kept them from entering the plaza. “You lost both sides of support,” one protester yelled. “We had your f**king back, but we ain’t got your back no more.”

“You lost both sides of support. We had your f***ing back, but we ain’t got your back no more!” Trump supporters yell at police after they block access to BLM Plaza and make arrests of some of the group tonight #DC #WashingtonDC #January6th pic.twitter.com/M2syNacscv

“We’re the business owners. We’re the veterans,” he continued. You don’t want to protect the Constitution, so you lost both sides now.”

Not to be deterred, the protesters attempted an end-run and tried to enter BLM plaza from another street, Gutenschwager reported. Police quickly responded by forming another skirmish line to block the protesters from entering BLM plaza.

Police rush to beat the crowd of Trump supporters who marched around to try to enter BLM Plaza from a different street. They form another line blocking access #DC #WashingtonDC #January6th pic.twitter.com/OkqlrpePaa

One woman became injured as police pushed the crowd of protesters back. 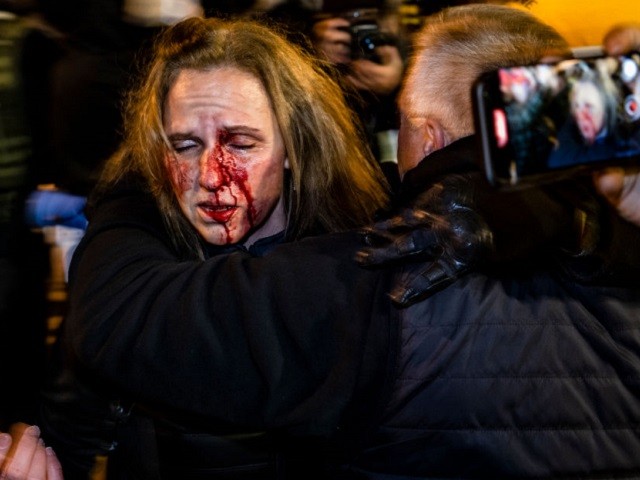 A woman is held by her husband after being struck in the face when police attempted to push back a group of pro-Trump protesters that tried to push through their lines into Black Lives Matter Plaza. (Photo by Samuel Corum/Getty Images)

The woman stated a “black girl” punched her in the face.

A WOMAN WAS ATTACKED BY ANTIFA & BLACK LIVES MATTER WHILE POLICE DID NOTHING pic.twitter.com/YZuQ1A13Kz

Fox News’ Mike Tobin reported the woman exchanged punches with a black woman who was part of a counter-protest group.

The protesters came to the nation’s capital for two days of demonstrations as the Congress is set to count the votes of the Electoral College on January 6.

Earlier in the day, D.C. police announced they arrested six people. The arrests came on charges ranging from firearms possession to assaulting a police officer, according to WJLA ABC7. 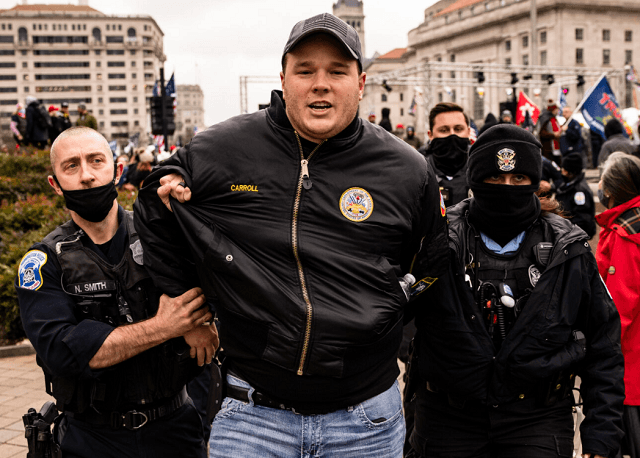 Firearms are not allowed in Washington, DC, within 1,000 feet of any First Amendment activity, the local ABC affiliate reported.

Gutenschwager tweeted a video showing one protester being arrested after rushing past the police line.

Police arrest one of the Trump supporters for rushing past an unmanned area next to the police line at BLM Plaza #DC #WashingtonDC #January6th pic.twitter.com/Glu4hvR1ek

The protesters recited the Pledge of Allegiance at the police line and they continued to block their pathway toward their goal of reaching BLM Plaza.

Trump supporters recite the Pledge of Allegiance at the line of police as they continue facing off over the blocking of BLM Plaza #DC #WashingtonDC #January6th pic.twitter.com/JygVJARrRB

“F**k BLM,” the chants continued. Trump supporters continued to occupy the streets well past midnight and into Wednesday morning.

“F*** BLM!” chants in BLM Plaza as the Trump supporters remain gathered at the police line on I Street #DC #WashingtonDC #January6th pic.twitter.com/xxNTUYolLH

Thousands of Trump supporters gathered at Freedom Plaza and in other locations around the city earlier on Tuesday in preparation for Wednesday’s joint session of Congress, the New York Times stated. An estimated 5,000 people began marching in the capital city.