JACKSONVILLE, Florida — Polk County Sheriff Grady Judd, one of the 55 Florida sheriffs who on Monday announced their endorsement for Sen. Marco Rubio’s (R-FL) reelection campaign, blasted the left’s efforts to ‘Defund the Police’ as well as their failure to defend law enforcement, noting that tens of thousands of people are flocking to the Sunshine State because it is safe.

Judd praised Rubio’s support for law enforcement and told the press that the senator, who Grady knew beforehand, has not changed since taking office.

Judd, a past president of Major County Sheriffs of America, noted that he has worked “tirelessly” to stop legislation passed by U.S. House, which would have made it easier to prosecute cops, putting “billions upon billions of taxpayer costs” on communities for lawsuits filed against officers.

“But what I saw was the U.S. House of Representatives and Val Deming’s voting to Defund the Police,” he said, mentioning Rubio’s potential Democrat challenger. “To cost the taxpayers more money. To make it easier to prosecute the police who are putting their life on the line in Orlando, Florida, and across this United States of America.”

Judd said he called Rubio at the time, and the senator assured him he stood with law enforcement and vowed to fight against the legislation.

“Now I ask you. I want you to look around the nation. Portland, Oregon. Seattle, Washington. Baltimore. Chicago. Washington DC. Wisconsin. You didn’t see peaceful protests when they were burning buildings and smashing cars and injuring people,” Judd said. 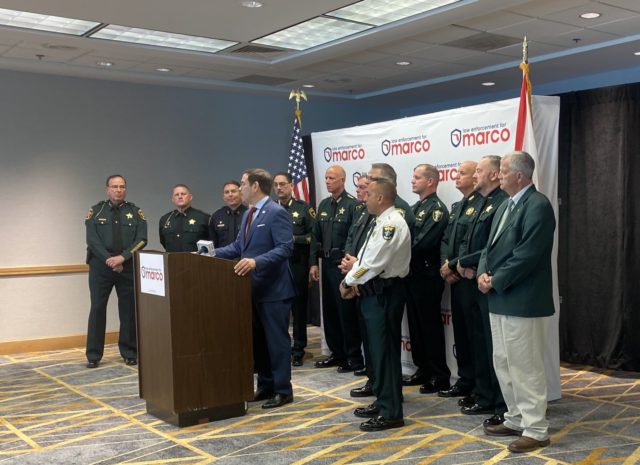 Sen. Marco Rubio (R-FL) at a campaign stop, in Jacksonville, Florida, received the endorsement of 55 sheriffs within the state on Monday, January 24, 2022. (Hannah Bleau / Breitbart News)

Over the past two years alone, Judd continued, 48,000 people have moved into his county.

“Why are they coming to Florida? Because we’re safe because it’s a place to be. Who wants to live in Portland? So when you go to bed at night, you don’t know if your car’s going to be there the next day or if your windows are going to be smashed or if they’re going to set the house on fire?” he asked.

“There’s real fear in those places. In the state of Florida, when you go to bed at night, you think about, do I go to Disney or the beaches? We got a U.S. senator who is simply the very best for Florida,” he continued. “It’s Marco Rubio.”