President Richard Nixon send a letter to current President-elect Donald Trump predicting that he was capable of a successful political career.

In 1987, Nixon wrote Trump regarding a television appearance his wife, former First Lady Pat Nixon, greatly enjoyed. Trump had agreed to a profile on the popular show Donahue, airing in December of that year.

“As you can imagine, she is an expert on politics and she predicts that whenever you decide to run for office you will be a winner!” the short letter read. 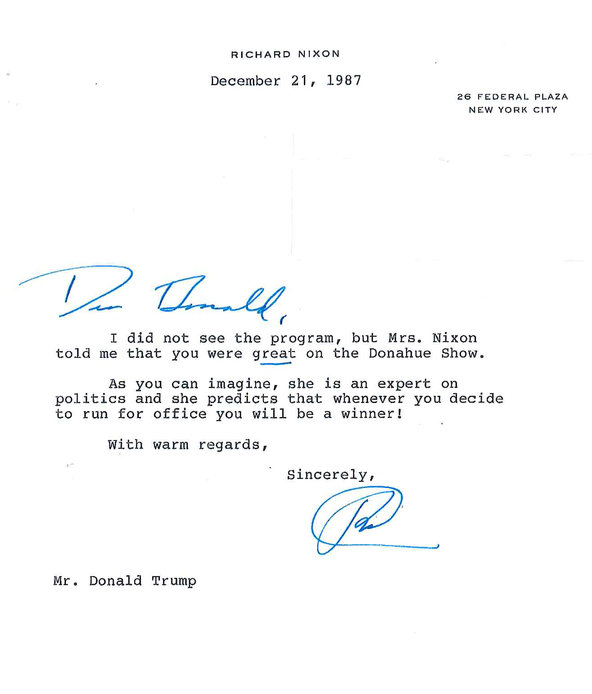 The letter became public as part of the release of a Donald Trump biography titled Never Enough: Donald Trump and the Pursuit of Success.

It would take nearly three decades for Trump to decide to run for office, proving the 37th president correct. On Tuesday, Donald Trump became president-elect of the United States, sweeping Democratic opponent Hillary Clinton in reliably blue states like Michigan and Wisconsin.

As Republican nominee, Nixon won the 1968 largely on the back of a campaign targeting middle-class Americans who felt the Kennedy and Johnson administrations had allowed the government to descend into chaos, particularly in the context of the rudderless Vietnam war. These voters he dubbed the “Silent Majority” in a 1969 speech. Trump’s campaign echoed many of the sentiments of that election, down to using the term to refer to those whose livelihoods were threatened or eliminated entirely by the growing global economy.

Below, Trump’s Donahue appearance that impressed the Nixons: