TEL AVIV – The latest anti-Semitic cartoon posted by Palestinian President Mahmoud Abbas’ Fatah party shows a yarmulke-wearing hooked-nose Jew relaxing in an armchair etched with a Jewish Star of David while he uses a remote control to bomb buildings in Gaza.

The cartoon, which Israeli NGO Palestinian Media Watch said was posted last week on Fatah’s Mobilization and Organization Commission website, was originally published in The Sydney Morning Herald – a major Australian newspaper – during the 50-day summer conflict with Gaza in 2014.

At the time, the New South Wales Jewish Board of Deputies slammed the newspaper for allowing the cartoon to run, saying it “racially vilifies” Jews.

“In our view this is racial vilification, not only in the sense of offending, insulting, humiliating and intimidating Jews as a group, but also in the sense of inciting third parties to hatred of Jews,” the organization’s president, Yair Miller, wrote at the time.

The Anti-Defamation Commission of B’nai B’rith also slammed the cartoon as “venomous propaganda” that portrayed “all Jews as heartless, cold-blooded murderers.” 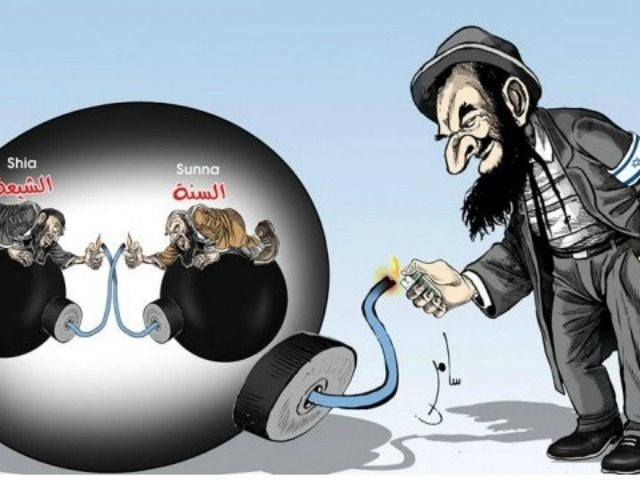 The cartoon also features the hooked-nose Jew, this time sporting ultra-Orthodox garb with an Israeli flag armband, about to detonate a bomb. Inside the bomb, a Sunni and a Shi’ite Muslim are seen lighting the fuses of bombs in order to blow each other up.

The image conveys the message that Israel and the Jews are orchestrating Muslim infighting between Sunnis and Shi’ites in order to destroy both groups.