JERUSALEM – The Palestinian Authority’s official daily published a cartoon propagating the libel that Jews and Israel control the world by controlling the U.S.

The caricature, first publicized by Israeli NGO Palestinian Media Watch, features a miniature soldier with a Star of David on his helmet giving orders to a large Uncle Sam-type figure with blank eyes, apparently representing America.

The larger man’s hat is decorated with a modified American flag that has a six-pointed Star of David instead of the five-pointed star. Uncle Sam holds a basketball that doubles as a globe, and the soldier representing Israel is apparently directing him to slam-dunk the globe into a Star of David-shaped basket.

The message is clear: America might be seen as controlling the world but it’s Israel that’s calling the shots.

The Palestinian Authority has in the past charged that Israel is directly responsible for civil wars around the world, as well the creation of the Islamic State terror group. 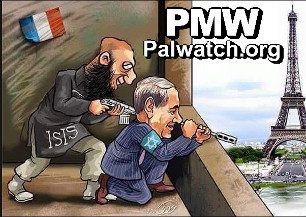 On Saturday, Breitbart Jerusalem reported on another cartoon published by Fatah showing a yarmulke-wearing, hooked-nose Jew relaxing in an armchair etched with a Jewish Star of David while he uses a remote control to bomb buildings in Gaza.