Individuals of Muslim background stand out among perpetrators of anti-Semitic violence in Western Europe, according to a new report by the University of Oslo Center for Research on Extremism. The next highest offending group was found to be left wing extremists.

The survey is titled Antisemitic Violence in Europe, 2005-2015, Exposure and Perpetrators in France, UK, Germany, Sweden, Norway, Denmark and Russia. It looks at the rate of anti-Semitic attacks in a range of countries, finding  Jews’ exposure to anti-Semitic violence appears to have been highest in France in the period surveyed, lower in Sweden and Germany, and lowest in the United Kingdom.

The survey found that “Russia clearly stands out with a very low number of incidents considering Russia’s relatively large Jewish population. Russia is also the only case in which there is little to indicate that Jews avoid displaying their identity in public.” It adds “attitude surveys do suggest that antisemitism is particularly widespread among those most hostile to Israel.”

As for who was behind the reported acts, the survey concluded that Muslim extremists clearly lead the way followed by the political left. 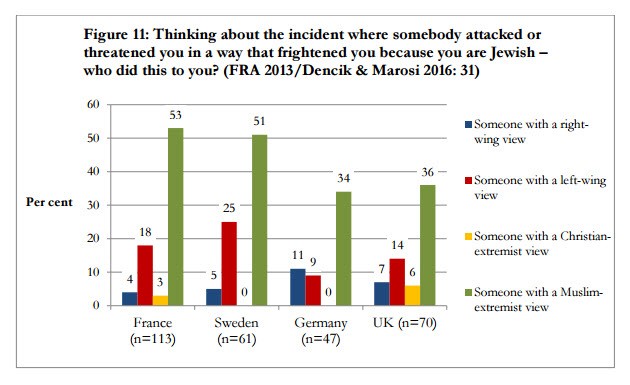 The survey examines the key drivers of anti-Semitic violence and found that religion and anti-Israel sentiment combined to drive most attacks. Attitude surveys corroborate this picture in so far as anti-Semitic attitudes are far more widespread among Muslims than among the general population in Western Europe. It ruled out any link between events in Europe and rising tensions in the Israeli–Palestinian conflict as causal effects. The report said:

The report’s release comes just two weeks after Franco-German broadcasters were accused of censorship when they shelved a documentary film about European Jews facing persecution by Muslim migrants, saying it was not “balanced” and the topic was “very sensitive”.

Chosen and Excluded — The Hate for Jews in Europe highlighted anti-Semitism on the continent and depicts the violence Jews experience from Muslim communities in cities such as Paris.

The socialist mayor of the Paris suburb of Saracelles, François Pupponi, interviewed for the documentary, said pro-Palestinian groups had encouraged hatred of Israel.

“For a certain number of young people ‘Jew’ and ‘Israel’ are one and the same so if you’re against Israel, you’re also against synagogues,” Mr. Pupponi said.