TEMPLE Mt, JERUSALEM – Cries of “The nation of Israel lives” ring from Jewish pilgrims about to ascend the Temple Mount, Judaism’s holiest site and the location of the first and second temples, as police check for weapons and other dangerous objects such as Star of David pendants.

It is day 11 since the Waqf, the Jordanian Islamic Trust that administers the site, deserted the Mount in protest over recently installed (and since removed) metal detectors. The metal detectors were first installed after Israeli Arab terrorists smuggled guns into the site and opened fire, killing two Druze-Israeli policemen on July 14.

Palestinian and Muslim leaders used the new security measures as a battle cry and called for a Day of Rage. Armed with Molotov cocktails and shouting slogans telling Jews that “the army of Muhammed is returning,” Muslims have converged on the holy city on a daily basis to riot. On Friday night, a grandfather and his two adult children were stabbed to death at their Shabbat table in the West Bank community of Halamish by a Palestinian terrorist who said he was avenging Israel’s alleged actions on the Temple Mount.

On Prime Minister Benjamin Netanyahu’s orders, the metal detectors were dismantled on Monday night, but the next day at the Temple Mount, the Waqf is still nowhere in sight, because, well, this was never really about metal detectors. Still, none of the group of Jews accompanying this reporter are complaining.

Yitzchak Reuven, Assistant International Director of the Temple Institute, which advocates for Jewish rights at the holy site, said the absence of Waqf officials was a welcome change. In addition to Israeli police, Waqf officials usually accompany every group of Jews ascending the Mount to ensure they don’t violate any of the rules, for example by moving their lips in prayer. Non-Muslims are barred from praying at the holy site or bringing any kind of religious articles such as prayer shawls or holy books. According to Reuven, the Waqf officials are routinely hostile to Jewish pilgrims.

“Jews aren’t even around to drink from water fountains here, because the Muslims object to it,” he said.

Yitzchak Reuven, Assistant International Director of the Temple Institute, explains how the Dome of the Rock sits on what was once the site of the Holy of Holies in the Jewish temple. Video: Deborah Danan.

Even though today the site is devoid of Muslim religious officials – indeed devoid of Muslims altogether as a result of the boycott – Israel’s police are still careful to adhere to the rules. To keep our group in check, a number of policemen holding video cameras film us the entire time. Another Jewish pilgrim was arrested today for reciting the mourner’s prayer over the three slain members of the Salomon family.  (This can be seen in the below video)

Despite Israel’s capitulation in removing the offending metal detectors, Palestinian Authority President Mahmoud Abbas’s Fatah faction on Wednesday called for Muslims to “intensify the popular struggle” for Jerusalem. After the detectors’ removal, Abbas said that his imposed freeze on security coordination between the PA and Israel would nonetheless remain in place.

Abbas claimed the installation of metal detectors was “falsely presented as a security measure” while in reality Israel wished “to take control of the Al Aqsa Mosque.” His Fatah faction added that the security changes were part of a “racist” ploy to “Jewify and take over Al Aqsa.”

Regarding the oft-repeated mantra that Israel is “changing the status quo on Al Aqsa,” two things jump to fore when actually visiting the area. The first is that the Al Aqsa Mosque – as even the name, meaning “the edge,” implies – takes up a tiny fraction of the enormous 37-acre plaza — the largest of its kind, built by Herod the Great in 19 BCE. 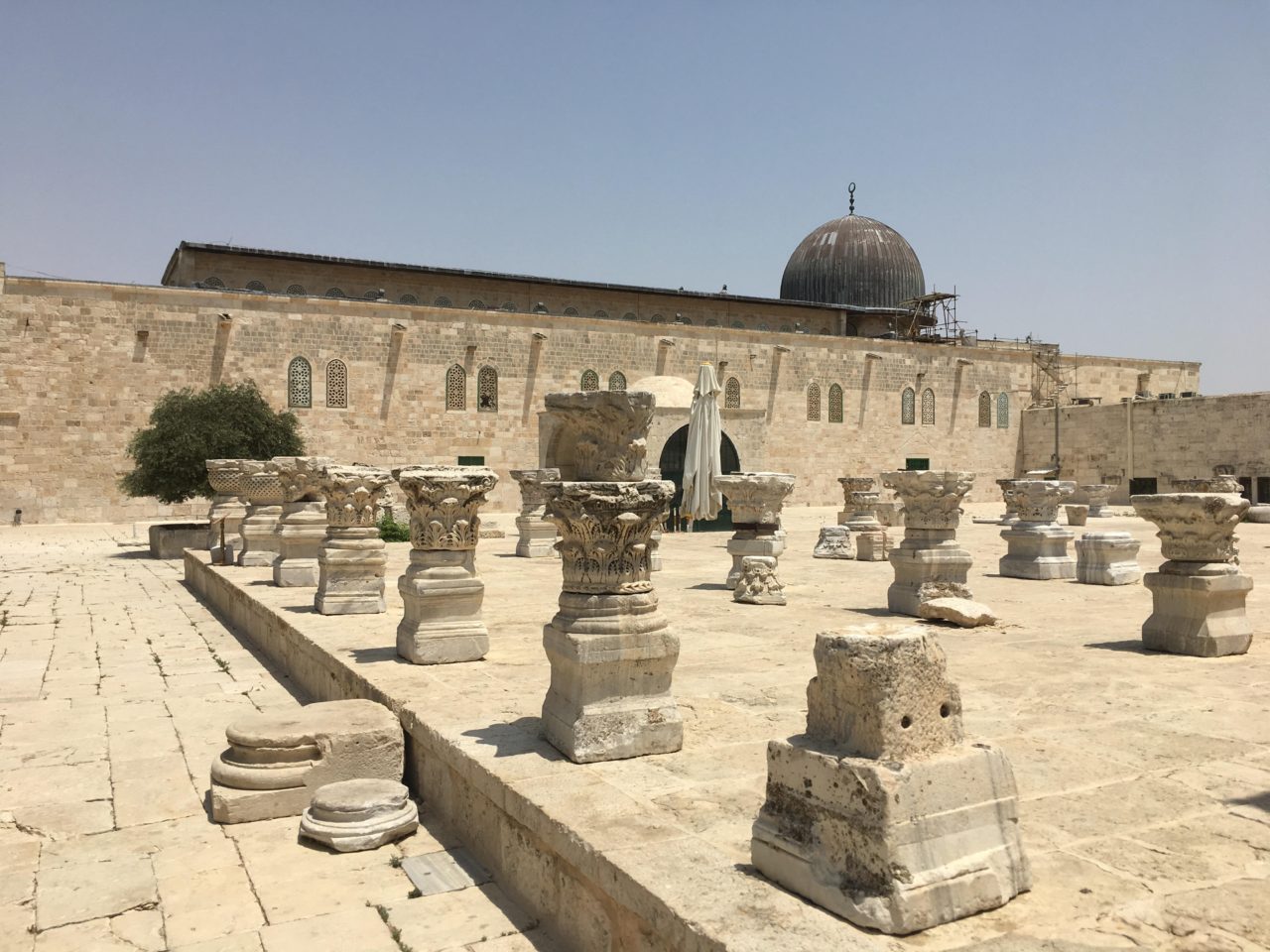 At the southwestern corner of the Temple Mount, a grey dome marks the Al Aqsa mosque. Photo: Deborah Danan/Breitbart Jerusalem

As Reuven explains, “No Jew is interested in the Mosque,” and gesturing to the vast expanse of the plateau, adds, “Look around. There’s space for everyone to pray.”

Yet on the Arab street and by Muslim leaders, the Al Aqsa Mosque – and not the Temple Mount or Haram al-Sharif as it is known in Arabic – is presented as being under grave threat from the Jews. As Islam’s third holiest site, the mosque is a flashpoint that drives Muslims to riot and invade people’s homes to murder them.

“With our blood and our souls we will redeem Al Aqsa,” rioters chanted on Tuesday.

The second point is the claim of Israel’s alleged changes to the “status quo” established after Israel captured the Temple Mount from Jordan during the 1967 Six Day War. As Reuven points out, the status quo is constantly in flux according to the whims of the Waqf. Muslims have 24/7 access to the site and use 11 entrances that – apart from the past week and a half – have no metal detectors. Jews and other non-Muslims, however, can only enter through a single gate and must pass through metal detectors, as is the norm today in most religious sites around the world, including the Vatican in Rome. In addition, Jews and non-Muslims can only visit five days a week between the hours of 7:30am-11:30am and 1:30pm-2:30pm. However, even with this limited access, the Waqf can decide at the last second not to allow Jews to ascend. And in the interests of keeping the peace, Israel’s police will almost always comply.

“The status quo is presented as something that is sacrosanct. Except it’s not, its dynamic,” Reuven said, adding that the hypocrisy of Muslim leaders on this point is further exacerbated by the reaction to violence at the holy site. “When someone is allowed into the Temple Mount and murders two policemen, that’s not disturbing the status quo?” he asks with irony.

Reuven emphasizes that, in any case, he is firmly opposed to the status quo. He claims it contradicts Israel’s own laws of freedom of religion. “In the book of Isaiah, we read, ‘My house shall be called a house of prayer for all peoples,'” he explains. “Except now only one nation is allowed to pray there – the nation of Islam. Israel boasts about having freedom of religion for all religions, yet at our holiest place those laws are systematically violated.”

Rabbi Chaim Richman, co-founder of the Temple Institute, agrees with his colleague’s assessment.

“This week’s events have demonstrated that while our government likes to repeat the mantra that the Temple Mount is in our hands, it is Jordan that actually holds the keys and the Israeli government that implements the Jordanian stranglehold on Judaism’s holiest site,” Richman told Breitbart Jerusalem.

“It’s high time that Jews be permitted to move their lips in prayer on the Temple Mount without fear of arrest or violence. For 2,000 years we prayed to come back to this place, now it’s time to behave like we’re home.”

Israeli police accompany groups of non-Muslims on the Temple Mount to ensure that the rules are adhered to. Video: Deborah Danan