“Mentally deranged,” is the text written on the page Trump is burning.

The irony is that Trump himself used that exact phrase to describe Wolff, threatening the book’s author with legal action for writing a “fake book.” 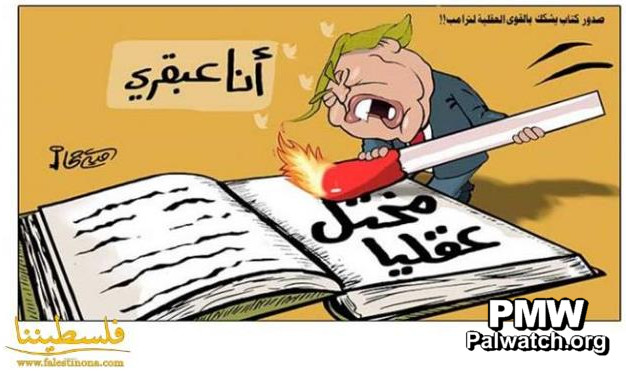 Fire and Fury‘s credibility has been questioned, with Wolff admitting early on that cited from those who evidence “looseness with the truth” is an “elemental thread of the book.” Wolff has previously been accused of publishing fabrications.

In the Fatah cartoon, Trump declares, “I’m a genius!”

The headline of the cartoon, which was published on the website of Fatah’s Information and Culture Commission in Lebanon and translated by Israeli monitoring group Palestinian Media Watch, reads:

“The mental fitness of one who does not recognize the Palestinian people and its legal and historical right in Jerusalem, the capital of Palestine, is questionable!”

The text in the upper right corner of the cartoon reads: “The publication of a book that casts doubt on Trump’s mental fitness.”

On Palestine This Morning, the hosts discuss the book, saying that in it, Trump is compared to “a small boy with needs, who goes to sleep at 6:30 p.m. and loves cheeseburgers and eats them.”

“Similarly, his behavior is like a child’s and he is unable to make decisions. He is not fit to fill this role,” one host says.

The other responds,”He always gets angry according to the book. … I call on everyone to read it as it gives us inside information about the White House which no one has spoken about previously – but [these behaviors] are to be expected of Donald Trump.”

The first then wonders, “Is a man of this mentality capable of determining the fate of the world, especially that which is connected to Jerusalem, which will remain the eternal capital of the State of Palestine?”