“From the outbreak of our revolution in 1965, the outlook of the Palestinian National Liberation Movement – Fatah – has been clear in its social aspect; it saw no difference between women and men, and Dalal Mughrabi (Ed: the terrorist who orchestrated the The Coastal Road massacre which left 38 Israelis dead) who led men is testimony to this,” Secretary-General of the PA Presidential Office Tayeb Abd Al-Rahim said at a Women’s Day ceremony according to an article in Al Hayat Al Jadida published last month and translated by Palestinian Media Watch.

Separately, the El-Bireh High School for Girls held a ceremony honoring Mughrabi, with the school principal asserting that urging young women to “fight” was the Palestinians’ “great educational responsibility.”

Nida Abd Rabbo said its “our goal is to strengthen the affiliation with Palestine and its history, and to adhere to the Palestinian identity, because this is a great educational responsibility. The forum’s goal is also to return the glory to the fighting Palestinian girls and women such as Dalal Mughrabi and others who sacrificed their lives for Palestine, and also to provide information and knowledge to these female students during recesses.”

Fatah also marked the 40th anniversary of The Coastal Road massacre earlier this month by honoring the “thunderous souls” of the Palestinian murderers and asserting that the Mughrabi died in a “most spectacular way” by first killing as many Israelis as possible.

“We stand in honor and appreciation of these thunderous souls, who ascended and hovered in Heaven to dwell by their Lord, cast their shadow, and entered the heart, soul, and memory of every Palestinian and of every Arab who belongs to Palestine,” a video posted on Fatah’s official Facebook page declared.

Palestinian Media Watch, which first exposed the video, explained that since the attack happened in 1978, Palestinians have referred to the hijacked bus in which most of the Israelis were murdered as “the first Palestinian Republic,” since the bus was under the terrorists’ control for a few hours as they drove from the north of the country to the center, shooting at passing cars on the way.

The video credits Mughrabi with being “the president of the first republic” and continues with a warped nod to the feminist movement by explaining that “heroism has no gender.”

“Arab men must understand that they don’t have a monopoly on the glory of life or the glory of death, and women can love much more nobly than the way they love, and die in a much more spectacular way than they die,” the Fatah video said.

Separately, the Fatah’s women’s committee at the Palestinian universities, called the “Sisters of Dalal” after Mughrabi, celebrated International Women’s Day by handing out cards to women at An-Najah University with a short message text praising Mughrabi and encouraging women to believe in themselves.

The Jerusalem branch of Fatah sent a greeting to Palestinian women on International Women’s Day, telling them that they are “partners in the struggle” and that historically, women in Palestinian society have “carried out the most prominent acts of heroism,” like the “praiseworthy Martyr Dalal Mughrabi,” independent Palestinian news agency Ma’an reported last week.

PMW recently reported on a video released by Fatah in which it tried to hide the fact  children were murdered in the Coastal Road massacre, instead claiming that everyone on the bus were “soldier passengers.” Below are photos of the Israeli children murdered in the attack. 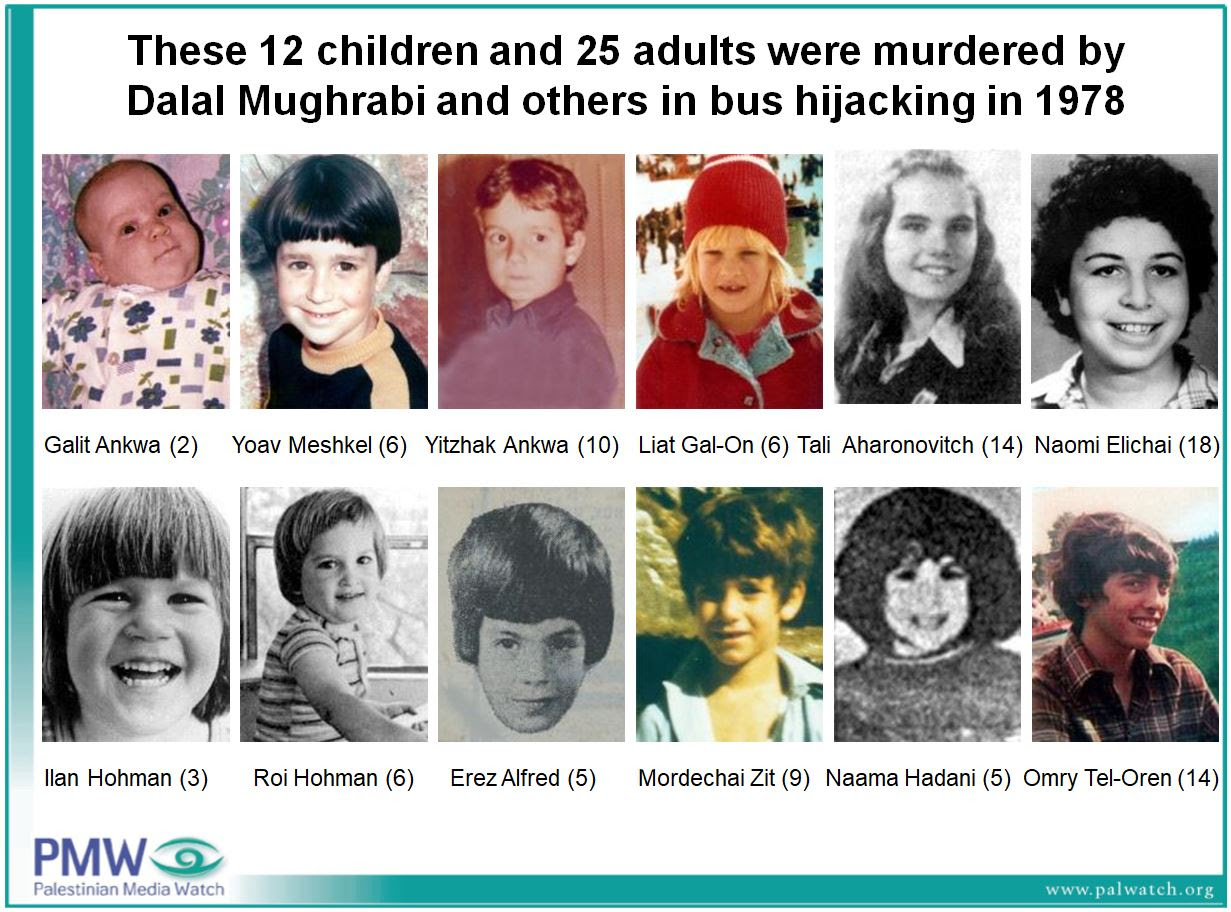 The Coastal Road Massacre took place on March 11, 1978, when Mughrabi led several other Fatah terrorists and hijacked a bus on Israel’s coastal highway, killing 38 people – including 13 children – and wounding more than 70.
As Breitbart Jerusalem has documented multiple times, Mughrabi has had honors heaped on her over the years, from town squares being named after her to children’s summer camps.