Jewish communities across Europe are enduring a level of mainstream anti-Semitism “not seen since the Second World War,” the European Jewish Congress has warned.

That chilling message was delivered just hours after Tel Aviv University’s Kantor Center Report on Antisemitism Worldwide 2017 was released on Wednesday, which noted that while the number of violent anti-Semitic incidents dropped in 2017 by 9 percent, to 327 cases, all types of incidents—ranging from harassment, vandalism, to assaults—have jumped.

The 105-page report dissects the spread of anti-Semitism in Europe, the post-Soviet region, the US, Canada, Australia, South America and South Africa. It records 327 major incidents of violence, vandalism and desecration in 2017, compared with a peak of 1,118 in 2009 and a low of 78 in 1989, the year the study began.

It found 30 percent of attacks were directed at individuals, 20 percent at cemeteries and memorial sites, and 17 percent at synagogues. 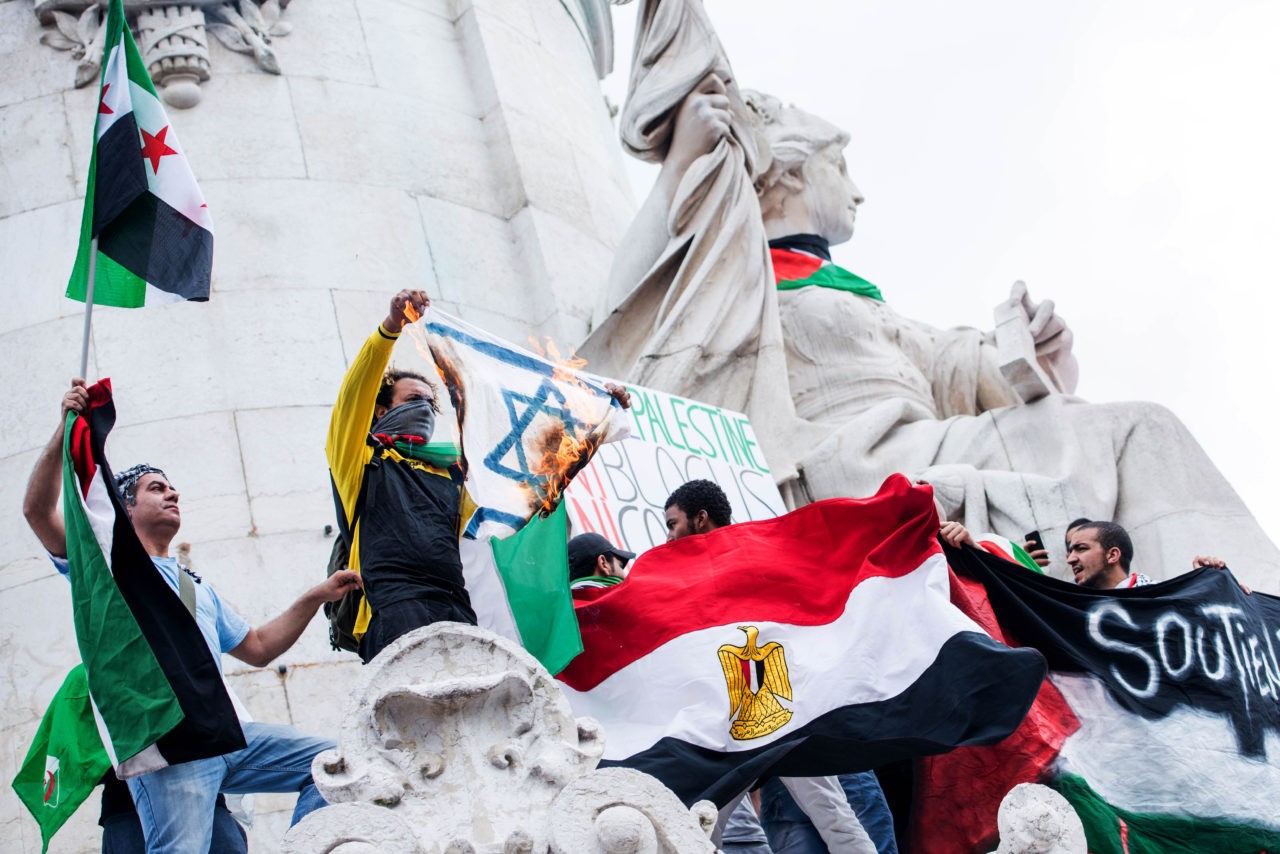 A pro-Palestinian protester displays a burning Israeli flag during a banned demonstration in support of Gaza at Place de la Republique in Paris, France. French police fired tear gas as clashes broke out at a banned pro-Gaza demonstration as thousands defied a ban on the protest. The interior minister had earlier called on organizers of the Paris demonstration to observe the ban imposed to halt potential anti-Semitic violence. (AP/Benjamin Girette)

“The general feeling shared by Jews, as individuals and as a community, is that anti-Semitism has entered a new phase, and is widespread in most parts of the world,” he said. “In many parts of Europe, Jewish communities and institutions can only operate under strict security measures. Fences, surveillance and police and military protection have become part of our daily lives.”

“In parallel, as our institutions become bunkers, helpless individuals become more vulnerable to isolated attacks. What evil can compel someone to commit some gruesome, despicable crimes? The answer is very clear, anti-Semitism de-humanizes Jews. And when people, Jews, we are de-humanized, anything goes.”

France has the largest Jewish community in Europe and has been particularly hard hit by attacks.

Just last month thousands of mourners silently walked through Paris to condemn the gruesome murder of an 85-year-old Jewish woman, the latest in a series of anti-Semitic violence to have convulsed the country. 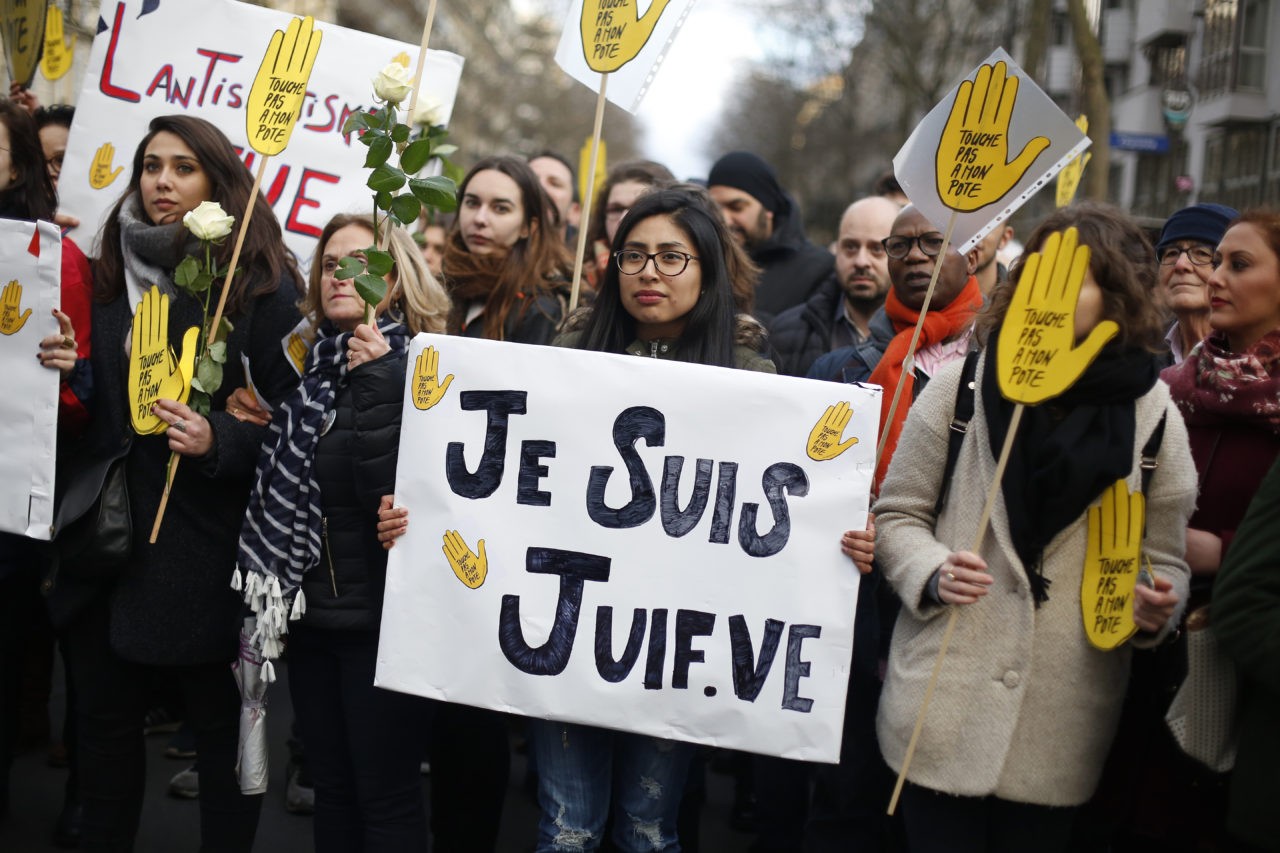 A woman carries a poster reading “I am a jew” as she attends a silent march to honor an 85-year-old woman who escaped the Nazis 76 years ago but was stabbed to death in her Paris apartment, apparently targeted because she was Jewish, and to denounce racism, in Paris, France. (AP/Thibault Camus)

France’s half-a-million-plus Jewish community has also been hit by a wave of emigration to Israel in the past two decades, partly due to the emergence of a virulent strain of anti-Semitism in predominantly immigrant neighbourhoods.

In the UK, the opposition Labour party has been led by far-left career politician Jeremy Corbyn since 2015 and in that time has come under increasing fire for his refusal to condemn terrorist organizations Hamas and Hezbollah.

The party as a whole has also been forced to face up to increasing allegations of anti-Semtisim within its ranks and has faced two large public demonstrations this month calling it to account.

According to the Community Security Trust, there was an increase of 34 percent in anti-Semitic physical assaults in Britain last year.

Mr. Kantor warned that Mr. Corbyn has systematically failed to take a strong enough line on anti-Semitism, instead “aligning himself with people and groups that hold openly anti-Semitic views and seek to spread their offensive messages throughout our society. When Corbyn consistently refuses to seriously acknowledge his party’s anti-Semitism problem, it becomes clear to many that anti-Semitism is acceptable.”

A new poll agrees with that summation. It found that more than half of voters think Labour has an anti-Semitism problem and over a third think Jeremy Corbyn is himself anti-Semitic.

Almost 51 percent also think Labour has at least pockets of anti-Semitism, and 34 percent think those pockets include the leader.