Vile, poisonous slanders against Jews have been exposed as part of the official Facebook page of UK Labour Party leader Jeremy Corbyn.

Claims that “supremacist Jews” have taken over Labour and are playing “victims” by talking about being “massacred by Hitler” are just two of the repeatable assertions Mr. Corbyn’s page played host to.

The Mail on Sunday reports others accused Jews of being the “biggest problem facing the world for centuries” while the “Zionist lobby” is alleged to be in control all of British politics. 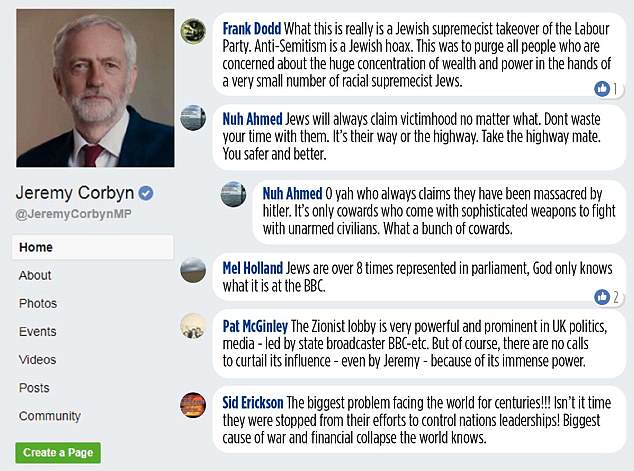 The comments were left in the days after Mr. Corbyn met with Jewish leaders in London to address their concerns over anti-Semitism in his left-wing party.

A spokesman for the Community Security Trust – a charity which campaigns against anti-Semitism – said: “Some of these comments contain shocking anti-Semitism.

“Jeremy Corbyn has pledged to drive anti-Semitism out of the Labour Party. We welcome this commitment, and a fitting place to start would be on his own Facebook page.”

UK Labour has long struggled to rid itself of anti-Semitic members. Parliament recently hosted a debate on Labour anti-Semitism and Mr. Corbyn was directly challenged to “explain why you defend the world’s oldest hatred.”

Earlier this month Jewish leaders and thousands of their supporters took to London’s streets to voice their opposition to state of the Labour Party. 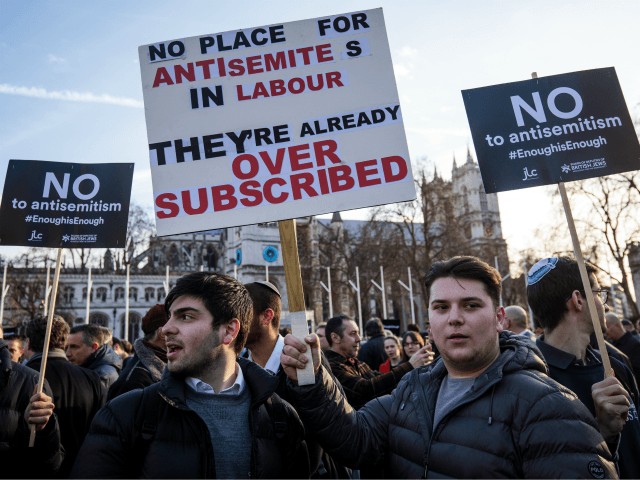 Protesters hold placards as they demonstrate in Parliament Square against anti-Semitism in the Labour Party. The Board of Deputies of British Jews and the Jewish Leadership Council have drawn up a letter accusing Labour Leader Jeremy Corbyn of failing to address anti-Semitism in his party. (Jack Taylor/Getty)

That march came in the wake of polling which shows that British Jews have been abandoning Labour since the election of Mr. Corbyn, and a recent survey revealed that four in five believe the party harbours anti-Semites in its ranks.

Labour’s trouble with anti-Semtic membership is not restricted to the UK.

Mr. Corbyn’s poor response to anti-Semitism charges and his “hostility” to the Jewish community has led to the Israeli Labor Party cutting all ties with its British counterpart.

Avi Gabbay, the chairman of the Israeli Labor Party, made the announcement in a letter sent to Mr. Corbyn’s office two weeks ago. He informed the Labour leader of a “temporary suspension of all formal relations” due to the bigotry exhibited by the hard-left party since Mr. Corbyn assumed the leadership.