“Economic experts and many officials believe the cause of this issue is not foreign, it’s internal,” he said in a speech in Tehran, according to tweets released on his official account and reported by AFP.

“Not that sanctions don’t have an impact, but the main factor is how we handle them.”

Khamenei referred specifically to the collapse in the currency, which has seen half its value wiped since early April.

“If our performance is better, more prudent, timely and effective, sanctions will not have that much effect and can be resisted,” he added.

The U.S. government last week reinstated a raft of economic sanctions that had been waived as part of the Iran JCPOA nuclear deal of 2015. These punitive economic measures will intensify in November, when the U.S. will seek to ban Iranian oil exports. 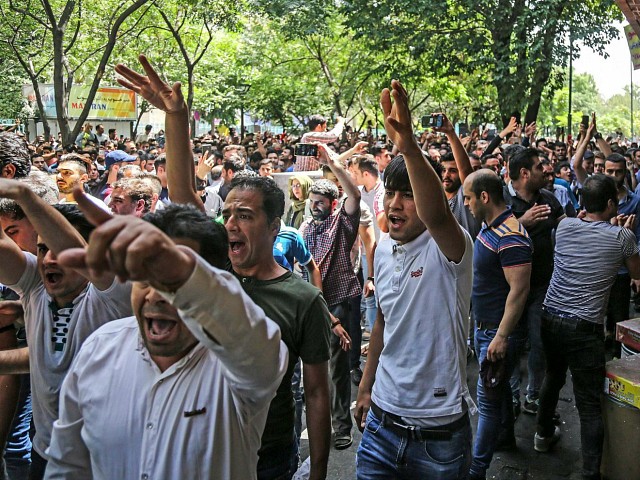 A group of protesters chant slogans at the old grand bazaar in Tehran. Protesters in the Iranian capital swarmed its historic Grand Bazaar on Monday, and forced shopkeepers to close their stalls in anger over the Islamic Republic’s troubled economy, months after similar demonstrations rocked the country. (Iranian Labor News Agency via AP)

While E.U. nations have pledged to try to preserve economic ties with Iran,  most large European companies already concede they will sacrifice trade with Iran, rather than risk suffering from secondary sanctions.

There have been widespread protests and strikes in recent weeks over high prices, unemployment and structural failures in the economy. In late December of last year, there were similar economic protests that spread to some 75 cities and towns, resulting in 25 people killed and nearly 5,000 arrested.

Other hint it has only exacerbated long-standing problems within Iran — and pressure has mounted from within the system on President Hassan Rouhani to improve his management of the economy and tackle corruption.