The project, which claims to be compatible with common core, pushes “rebellion” and educates students on the PFLP’s goal, which is posted on Dream Defenders stationary and quite literally calls for “the destruction of the Zionist state.”

The PFLP is designated by the U.S. State Department as a foreign terrorist organization. As a secular Palestinian Marxist-Leninist terrorist group, the PFLP is responsible for scores of deadly suicide bombings, shooting attacks and airplane hijackings in which Israelis were murdered in cold blood.

Gillum has evidenced a close personal and professional relationship with Dream Defenders. He has talked about aiding the group’s activism and written in strong support of Dream Defenders and its co-founder, Phillip Agnew. In turn, Agnew himself recently described a long and close working and personal relationship with Gillum and said he considers Gillum to be “part of the movement.”

Gillum has also been under fire in recent days after it emerged that he signed Dream Defenders’ “Freedom Papers,” which espouse socialist ideology and exclaim that “police and prisons have no place in ‘justice.’”

Meanwhile, the Dream Defenders education project in question, according to the Gillum-linked group’s literature, spotlights “revolutionary organizations” from around the world in an effort to “highlight their elements of rebellion.”

The lesson plan, reviewed by Breitbart News, says it “asks students to explore movements and organizations that led social change and display a coherent understanding of organizations and issues.”

“How are you creating the change you want to see in the world and the society we live in?” the curriculum asks. “What kind of leader do you want to be?”

The clear goal is to lionize the organizations promoted in the radical curriculum. The project is titled “Blacked Out History: Rebellion.” It boasts educational literature, lesson plans and optional artwork replete with PFLP symbols. It is designed for grades 6 through 10 and boasts that the lesson is “common core compatible.” 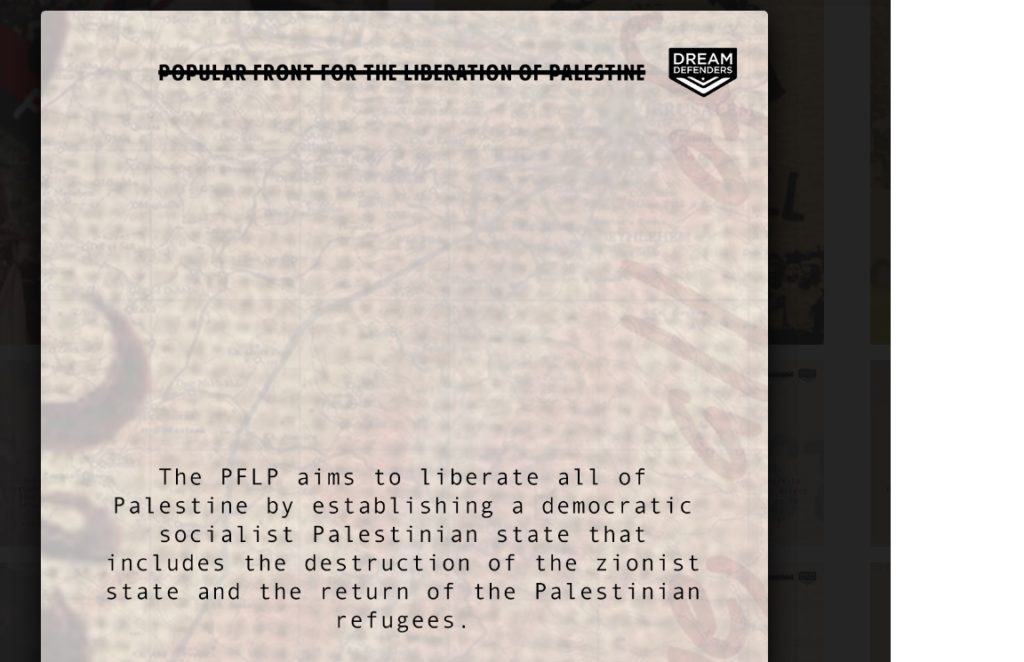 The “vocabulary” section teaches students that “capitalism” is “an economic and political system in which a country’s trade and industry are controlled by private owners for proﬁt, rather than by the state, which often leads to exploitation of workers.”

It also teaches students the phrase “white supremacy,” which it defines as “the belief that white people are superior to those of all other races, especially the black race, and should therefore dominate society.”

Besides the PFLP, the lesson spotlights the Sandinistas, South African Student Movement and the Black Panther Party.

The lesson teaches that the PFLP maintains the following “key points” (below are direct quotes):

A few of the more well-known deadly PFLP suicide bombings include the December 5, 2003 suicide bombing of a bus station in central Israel; the November 1, 2004 suicide bombing of the popular Carmel Market in Tel Aviv; the February 16, 2002 suicide bombing of an Israeli pizzeria; and along with Hamas, the May 19, 2002 bombing of a Netanya market. The PFLP also claimed responsibility for the 2014 Jerusalem synagogue massacre, although Israel later dubbed the murderous assault a lone wolf attack.

In the 1960’s and 1970’s, the PFLP carried out numerous airplane hijackings and is widely considered a pioneer of that terrorist tactic.

The lesson plan states: “When the leader of PFLP (Abu Ali Mustafa) was assassinated by the Israeli military forces, three days of national mourning was declared and thousands of Palestinians attended his funeral. His death was avenged by killing the Israeli Minister of Tourism, so it seems that the PFLP receives support from some people in their community.”

Gillum, meanwhile, previously posted a picture of himself (below) on Facebook posing with Phillip Agnew, the co-founder of Dream Defenders, which in addition to its anti-Israel activities also demands an end to “disaster capitalism,” espouses socialist-style principals and rants against Independence Day. 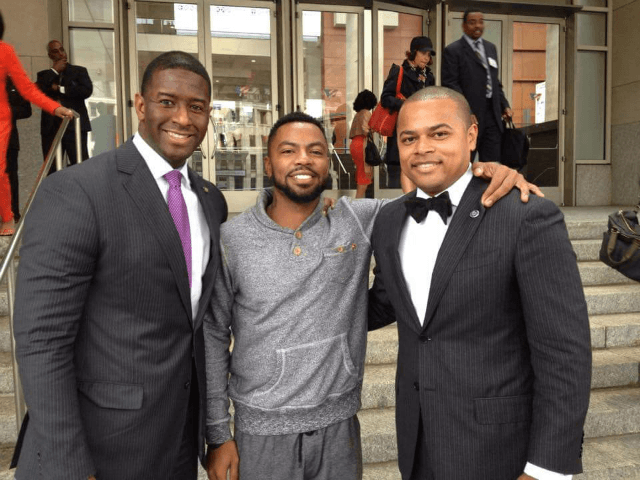 “Ran into two Rattlers today at CBC,” reads Gillum’s caption on the photo, which can be seen above and is dated September 25, 2014. “Could not be prouder of Phillip Agnew and commissioner Keon Hardemon.”

Dream Defenders Action Fund, the electoral and c4 nonprofit arm of Dream Defenders, was part of a progressive coalition that reportedly committed $3.5 million to help Gillum win the Democratic primary against Gwen Graham.

Gillum and Dream Defenders’ Agnew are so familiar with each other that while he was a city commissioner in Tallahassee, Gillum himself penned a glowing profile at the far-left Alternet publication promoting Agnew and the activist’s work founding Dream Defenders titled, “We need more Phillip Agnews.”

Seven years later, in response to the shooting of Florida teen Trayvon Martin, Agnew built on his past social justice experiences and connections to form the Dream Defenders, which helped bring national attention to the Martin case. From Governor Scott’s office, the Dream Defenders pushed for a repeal of Florida’s Stand Your Ground law and a special legislative session on racial profiling and the school-to-prison pipeline, among other demands. Following 31 days in the Capitol and a commitment from Florida House Speaker Will Weatherford to hold a hearing on the state’s Stand Your Ground law, Agnew announced that the Dream Defenders would leave to refocus on civic engagement in their communities to amplify the need for reform. Dream Defenders, which continues to be led by young people of color, now has chapters on nine college campuses in Florida and continues to highlight racial and social economic justice issues.

Gillum, who would go on to become Tallahassee mayor, gushed in the March 2014 profile: “We must learn from the successes of young leaders like the Dream Defenders and recruit, train and connect thousands more local organizers and activists, particularly in underrepresented communities and regions of the country.”

Gillum and Agnew are both graduates of the Rockwood Leadership Institute, an Oakland, California-based training school for progressive revolutionaries that has spawned a list of activists who have gone on to become the who’s who of the far-left leadership world, with many taking senior positions at organizations financed by billionaire George Soros.

Breitbart News reported that in its official endorsement of Gillum, Dream Defenders said they see Gillum as “by far the best candidate for our movement to engage with in pushing our revolutionary vision.”

Dream Defenders announced the politician’s “governorship would completely change the terrain on which our movement is ﬁghting and the makeup of the Democratic Party itself.” The endorsement advertised that Gillum’s “progressive platform for Florida creates much more favorable conditions for our movement and our people.”

In its endorsement, Dream Defenders summarized the aims of its “movement” as no less than the replacement of the current state with a “people-centered” state — a clear euphemism for socialism.

“Our vision for Florida — the Freedom Papers — is one where a people-centered state replaces our current proﬁt-centered one,” Dream Defenders said.

The organization’s “Freedom Papers” advocate textbook socialist principals such as claiming that “by virtue of being born each of us has the absolute right to adequate food, shelter, clothing, water, healthcare, effective public transportation, dignified work, living wages.”

The “Freedom Papers” referenced in the endorsement of Gillum further stress “police and prisons have no place in ‘justice,’” while calling for an “absolute right” to fully-funded free public education.

Dream Defenders announced that Gillum is the first politician that the group has endorsed in its six-year history.

The radical organization said Gillum’s platform is critical to altering the politics of Florida and making the state a model for “progressive governance”:

This is not only one of the most progressive platforms that a Florida gubernatorial candidate has ever run on, but it is also one of the most progressive platforms we have seen from any gubernatorial candidate in the country. Florida is ground zero for far right, corporate-control of our government. With Gillum’s platform, we have the opportunity to shift this and become a model for progressive governance. It is our job to hold him — and every elected [sic] — to the promises made in this platform.

Dream Defenders praised Gillum as “the only non-millionaire (or billionaire) running for governor,” leaving out that he is openly financially backed by billionaires George Soros and Tom Steyer.

Andrew Gillum is by far the best candidate for our movement to engage with in pushing our revolutionary vision. In 2014, when Gillum was Mayor of Tallahassee, the Dream Defenders shut down Tallahassee’s Annual Christmas Parade to bring attention to police violence, he didn’t have us arrested. Instead, he opened the space for us talk [sic] to the crowd.

As Breitbart News reported, a simple perusal of the website of Dream Defenders, the organization so feverishly championed by Gillum, evidences the group’s open radicalism. The organization calls for an “end” to “disaster  capitalism,” rants against Independence Day and spreads malicious falsehoods about Israel.

The main page boasts that Dream Defenders is “building a powerful, deep, local organization and movement for freedom and liberation in Florida.”

A section on its website about July 4th urges supporters to “acknowledge that the independence being commemorated has not been won for the people of this land.”

Independence Day in America should be utilized “to illuminate the ‘immeasurable distances’ between U.S. citizens and the harm committed in our name around the world,” the organization states. “What to the prisoner is the fourth of July?” Dream Defenders asks. “The indigenous people who were here before white settlers?”

The anti-patriotic posting goes on to call for an end to “disaster capitalism” and the total abolition of the U.S. Immigration and Customs Enforcement (ICE) agency, while lamenting U.S. military aid to Israel:

The only future for us to survive within is one of demilitarization, and an end to disaster capitalism, where money and weapons no longer get to criss cross borders with ease while black and brown children are held captive as collateral damage.

Why is there enough money to bomb Iraq, Yemen, Sudan, Syria, Pakistan, Afghanistan, Somalia, but not enough to support the self determination of migrants and refugees fleeing the very violence the U.S. has inflicted? Why is there enough money to sign contracts with private prison corporations like CoreCivic and GEO Group for hundreds of millions of dollars, but not enough money to rebuild Puerto Rico? Why are there billions of dollars allocated to Israel’s military to kill unarmed protestors [sic] but not the same investment to clean Flint’s water supply? The consequences of normalizing the immense violence perpetuated under the banner of U.S. exceptionalism ripple far and wide. We are all harmed by the racist misallocation of resources in America towards never ending extraction and destruction. We mourn for all of the lives lost this year serving the war machines.

In the U.S. thousands have rallied around the country demanding ICE be abolished and children be reunited with their families.

Breitbart News reported that Dream Defenders organized a flash mob in Israel to officially endorse the BDS movement against the Jewish state.