TEL AVIV – More than 1,000 fires — many of which were sparked by IEDs sent over the Gaza border and fueled by extreme weather — devastated towns and forests and farmlands over less than two days, forcing thousands to evacuate their homes.

On Saturday night, the Israel Fire and Rescue Services on Saturday declared the end of a widespread campaign to extinguish the blazes which burned down 7,940 dunams (1,962 acres) of forests. One thousand firefighters were called up.

According to officials, a new fire ignited every 2.5 minutes. Twelve firefighting planes joined the operation and nine more were sent by other countries including Egypt, Cyprus, Greece, Italy and Croatia.

“I am deeply thankful for the readiness of neighbors to help us in a time of crisis, just as we help them,” Netanyahu said. 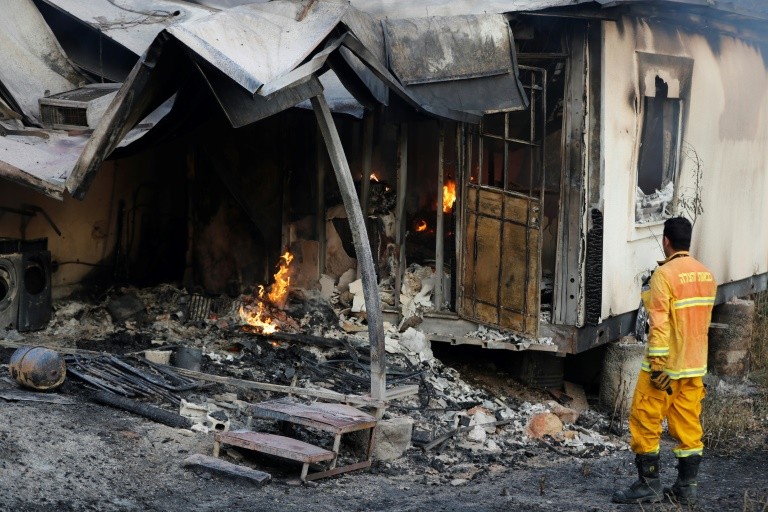 The Ben Shemen Forest in central Israel suffered the worst devastation. Adjacent to Ben Shemen is Mevo Modi’im, a village comprised mostly of American immigrants, in which 45 out of 50 houses burned to the ground. Nearby Kibbutz Harel was also hit hard and residents of both communities are still evacuated.

Mevo Modi’im residents, evacuated to the Ben Shemen Youth Village, were in uncannily high spirits as they sang songs at Havdalah — the celebration marking the end of the Sabbath.

“We were struck by a disaster, but Shabbat is Shabbat and its sweetness gives us our lives,” Alon Tigar, chairman of the community’s association, told the Ynet news site. “We are a strong community and we will build Mevo Modi’im 2.0, we have the hope. I spoke with government officials and they promised to help. I hope they make good on their words.”

Sruli Portnoy, who lived there with his wife Chaya, wrote, “We are going to come back like a pack of phoenixes — bigger, better and more beautiful.”