(UPI) — Archaeologists in Egypt on Saturday opened the coffins of two of the 30 mummies discovered earlier this year and estimated to be 3,000 years old.

In April, the remains were found by accident under a mound behind the Asasif Necropolis on the west bank of the Nile river in the Valley of the Kings. The archaeologists were conducting an unrelated dig when one coffin was found, Mostafa Waziri, secretary-general for Egypt’s Supreme Council of Antiquities, told NBC News.

On Saturday, two of the coffins were pried open during a ceremony in Luxor. The others were opened earlier.

The coffins, which were adorned with paintings and inscriptions, contained preserved mummies of 23 adult males, five adult females and two children. The adults were most likely priests.

“This discovery is one of the largest and most important discoveries that have been announced during the past few years as it includes so far more than 20 colored wooden human coffins, in a distinct state of conservation, colors and inscriptions in full and are still closed, and were revealed in the situation that left them,” the Antiquities Ministry wrote on its website. “The ancient Egyptian where they were found gathered in a cache in two levels, one above the other.”

The coffins were found sealed “as the ancient Egyptians left them,” according to the ministry.
During the news conference, archaeologists pried open two of the coffins to uncover mummies wrapped in cloth — one man and one woman. A piece of skull was visible among each one.

The gender was determined by the shape of their hands. The women were buried with their hands open while men’s hands were closed.

The coffins are believed to be much older than most tombs at the Asasif Necropolis in the ancient town of West Thebes that date to the Late Period, which ended in 332 B.C.

The newly excavated tomb is one of several ancient burial sites located in the ancient city. 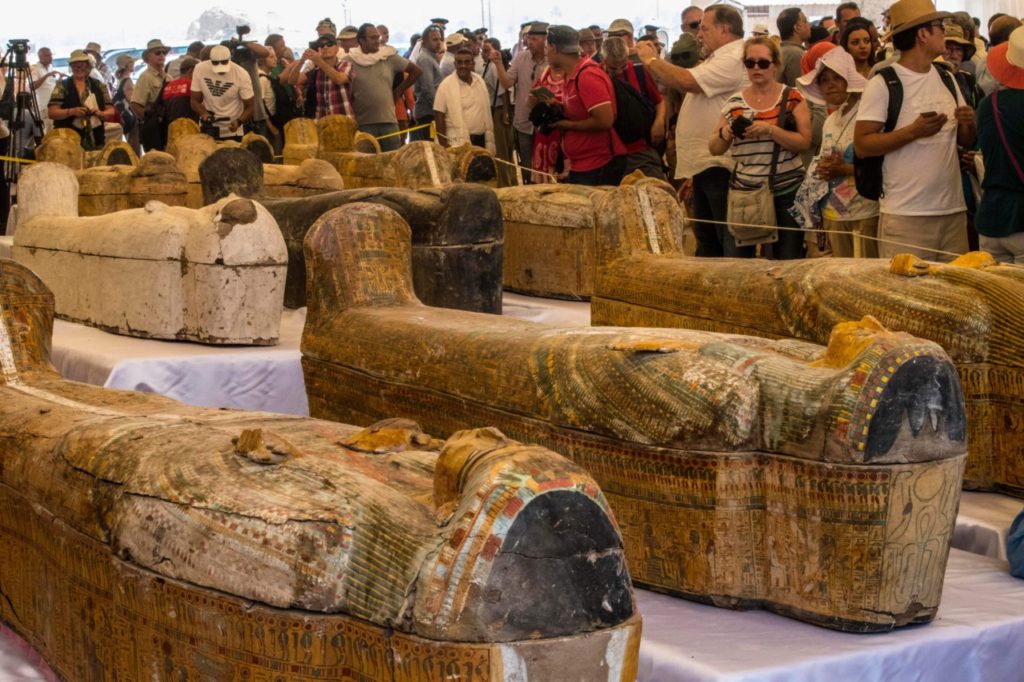 Egypt revealed today a rare trove of 30 ancient wooden coffins that have been well-preserved over millennia in the archaeologically rich Valley of the Kings in Luxor. The antiquities ministry officially unveiled the discovery made at Asasif, a necropolis on the west bank of the Nile River, at a press conference against the backdrop of the Hatshepsut Temple. (KHALED DESOUKI/AFP via Getty Images)

“The mission has mapped around 300 tombs dating back from the 6th century BC to the 4th century AD, located in the area surrounding the Mausoleum of the Aga Khan, on the Aswan West Bank,” ministry officials wrote. “The Egyptian archaeologists had already excavated 25 tombs in the area from 2015 to 2018.”

Because these coffins were buried in the sand, they were completely intact, instead of being destroyed by termites.

They will be displayed in the Grand Egyptian Museum to open in Giza near Cairo next year.

Luxor is 409 miles south of Cairo.