Israeli Prime Minister Benjamin Netanyahu has received warm birthday wishes from U.S. President Donald Trump, providing a welcome distraction on his 70th birthday as he continues to fight for his political survival.

“There has never been a more productive time in the Israeli-American partnership, and I know there are many more victories to come,” Trump wrote in the letter, dated October 21, the date of the Israeli leader’s birthday. Trump praised  Netanyahu for his “strong leadership and loyal friendship,” applauding the Israeli leader as “one of my closest allies.”

Trump added:”I look forward to the continued success we will have working together.” 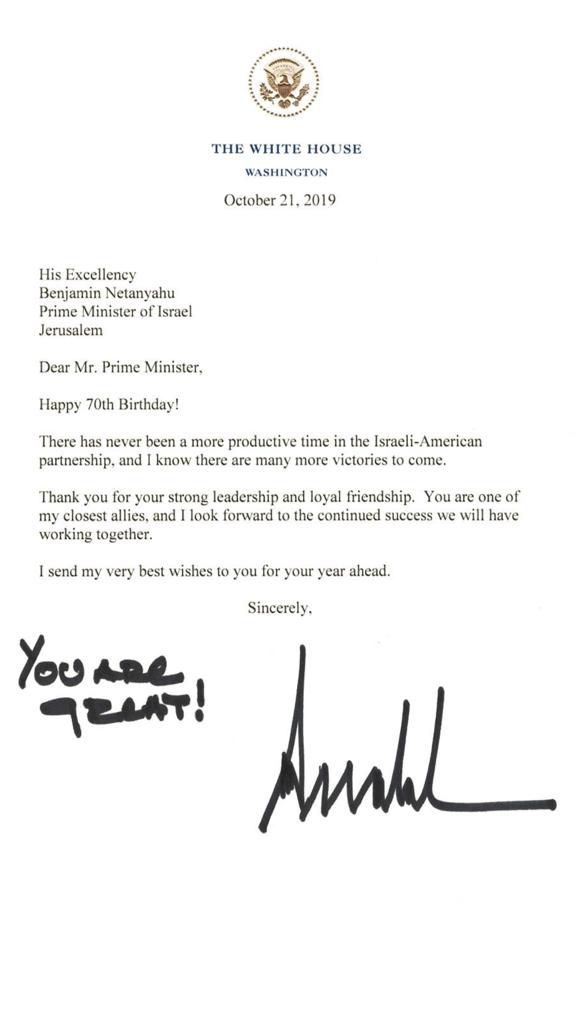 Netanyahu responded with his own acknowledgement of their closeness via Twitter:

Thank you to my friend President Trump for your warm words on my birthday. Our alliance and friendship have never been stronger. pic.twitter.com/HnBdd0pgC1

The exchange comes after Netanyahu announced Monday he had failed to form a majority government in parliament, marking a major setback for the embattled Israeli leader that plunges the country into a new period of political uncertainty.

In a statement, Netanyahu said he had worked “tirelessly” to establish a unity government with his chief rival, former military chief Benny Gantz, but been repeatedly rebuffed. Facing a Wednesday deadline, Netanyahu said he was returning the “mandate” to President Reuven Rivlin, who will now ask Gantz to try to form a coalition. Gantz, however, could face an equally difficult task.

While Netanyahu remains at the helm of his Likud party, his announcement marked the second time this year he has been thwarted in an attempt to form a government.

As Breitbart News reported, with Israel’s attorney general set to decide in the coming weeks on whether to indict Netanyahu in a series of corruption cases, the longtime Israeli leader could come under heavy pressure to step aside. One party rival, Gideon Saar, has already indicated he would challenge Netanyahu if Likud holds a primary.