Iran will wipe out the United States, Israel and the U.K if they cross Tehran’s red lines, the head of the country’s elite Revolutionary Guard Corps (IRGC) said Monday in an address to a pro-government rally. He added “solid slaps” will be forthcoming for any country that challenges the Islamic Republic.

Gen. Hossein Salami, echoing other Iranian officials, also accused the U.S., Britain, Israel, and Saudi Arabia of stoking the unrest across the Middle East and warned the military might of Iran will not be tested.

He spoke as state television carried live footage of demonstrators chanting “Death to America,” and “Death to Israel” while marching toward Tehran’s Revolution Square to hear his speech.

“If you cross our red line, we will destroy you,” he told the crowd. “We will not leave any move unanswered.”

“We have shown restraint … we have shown patience towards the hostile moves of America, the Zionist regime (Israel) and Saudi Arabia against the Islamic Republic of Iran,” Salami added, according to the official MEHR news agency.

“You tested us on the battlefield and received solid slaps but you could not respond; The entire world has probably seen some of these slaps and while have not seen some of them. You must wait and not cross our red lines because if you do, we will destroy you.”

He said if Iran decides to respond, “the enemy will not have security anywhere,” adding that “our patience has a limit.”

This is not the first time Salami has warned the world about his country’s military might.

In September he said Iran has special “hidden” military powers it is ready to unleash at any moment on an unsuspecting world, as Breitbart News reported. 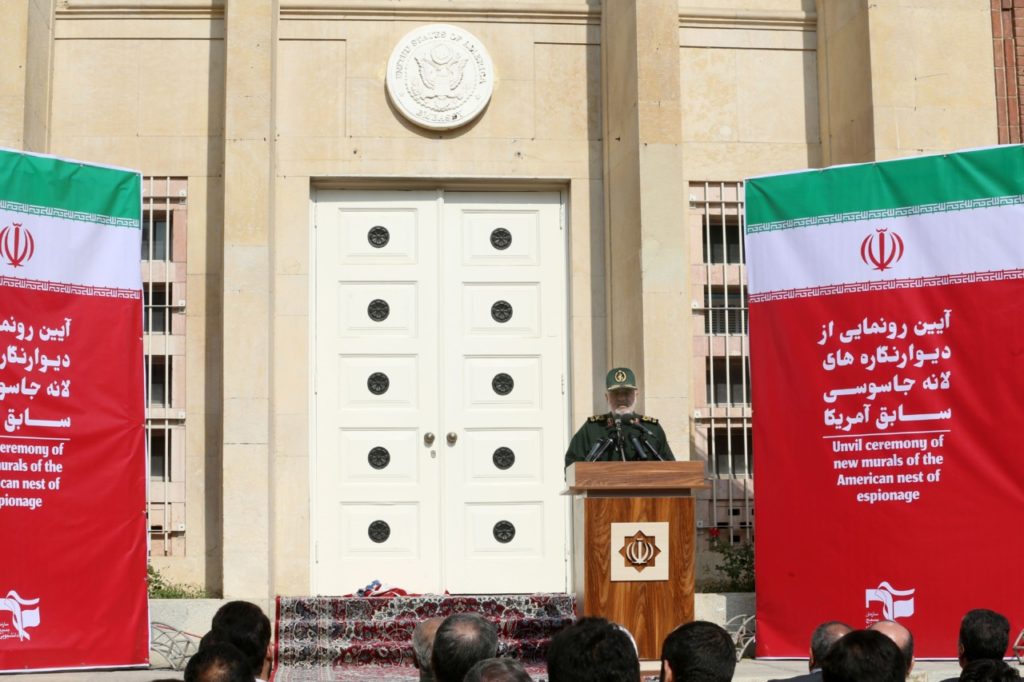 Iranian Revolutionary Guards commander Major General Hossein Salami speaks at the podium in front of the building that housed the former U.S. embassy, during an inaugural ceremony unveiling the new murals painted on its walls, in the capital Tehran. (ATTA KENARE/AFP via Getty Images)

Salami’s address came after 10 days of rioting roiled the Islamic Republic and the government vowed to severely punish “mercenaries” arrested over a wave of street unrest sparked by a fuel price hike, as much of the country came back online after a week-long internet blackout.

The protests first flared on November 15, hours after a surprise announcement that petrol prices were being raised by as much as 200 percent with immediate effect.

Highways were blocked, banks and petrol stations set on fire and shops looted as the demonstrations turned violent and spread to dozens of urban centres across the country.

Citing law enforcement officials, Fars news agency said on Sunday that 180 ringleaders had been arrested over the street violence, which it has blamed on enemies abroad.