Ahead of his arrival in the capital Riyadh, Pompeo said he’d also raise with the Saudi leadership concerns about human rights and the cases of dual Saudi-American citizenswho are either imprisoned in the kingdom or barred from traveling abroad.

Following his meeting at the royal palace with the king, Pompeo headed to a Saudi air base where some 2,500 U.S. troops are stationed in response to threats from Iran.

The U.S. military presence in the kingdom at the Prince Sultan Air Base includes a squadron of U.S. Air Force F-15E fighters that fly daily missions over Iraq and Syria and two American Patriot missile batteries prepared to knock down any Iranian attack against the Saudi kingdom.

American troops were sent to Saudi Arabia last summer as part of the Trump administration’s efforts to beef up the United States’ military presence in the Middle East in response to escalating tensions between Washington and Tehran following President Donald Trump’s decision to pull the U.S. out of Iran’s nuclear agreement with world powers and impose sanctions on the country.

Saudi Arabia and the U.S. have blamed Iran for an attack last summer against Saudi oil facilities that temporarily halved the kingdom’s daily crude production. Iran denies involvement and its allied Yemeni rebel Houthi group says they were behind the attack. 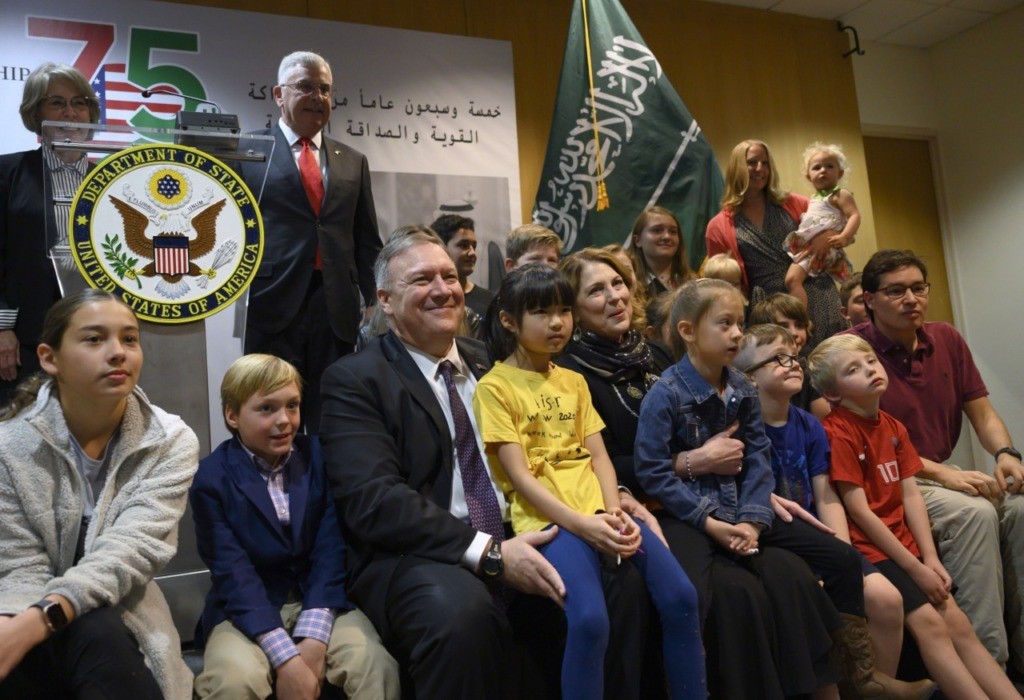 U.S. Secretary of State Mike Pompeo (C) and his wife Susan (C-R) meet with family members at the U.S. embassy in Riyadh on February 20, 2020.  (Photo by ANDREW CABALLERO-REYNOLDS/POOL/AFP via Getty Images)

Saudi Arabia is a decades-long U.S. ally, but that relationship was rocked by the 2018 killing of Saudi dissident and Washington Post columnist Jamal Khashoggi in the Saudi consulate in Istanbul. Congress has also harshly criticized Saudi Arabia for its war in Yemen, which has led to the world’s worst humanitarian disaster.

The kingdom, however, remains the biggest buyer of U.S. military arms and its young Crown Prince Mohammed bin Salman has cultivated a relationship with Trump’s son-in-law and senior adviser on Mideast policy, Jared Kushner.

Pompeo has said the U.S. is prepared to come to the table to talk with Iran, but is not rushing to do so.

During his time in Riyadh, Pompeo also met Thursday with a group of Saudi women business leaders at the residence of Saudi Arabia’s ambassador to the U.S., Princess Reema bint Bandar Al Saud.

Pompeo departs Friday for Oman, a close U.S. ally that has ties with both Saudi Arabia and Iran.