During a Knesset hearing on antisemitism in social media, international human rights lawyer Arsen Ostrovsky asked Twitter’s regional policy head Ylwa Pettersson why the U.S. president’s tweets were labelled as violating the social media giant’s rules on “glorifying violence”, and on a separate occasion “abusive behavior”, but not those of Khamenei, who “literally called for the genocide of Israel and the Jewish people.”

The news came amid a Twitter storm that included the suspension of Donald Trump Jr.’s after he tweeted a video promoting hydroxychloroquine as a COVID-19 cure and a 48-hour Twitter boycott by Jewish people and allies over online antisemitism.

I kid you not! At Knesset hearing on Antisemitism, @Twitter rep tells me they flag @realDonaldTrump because it serves ‘public conversation’, but not Iran's @khamenei_ir call for GENOCIDE, which passes for acceptable 'commentary on political issues of the day'. cc. @CotlerWunsh pic.twitter.com/AXwjkrvlql

In her response, Pettersson said Khamenei’s calls for genocide against Israel were merely “foreign policy saber-rattling.”

“We have an approach toward leaders that says that direct interactions with fellow public figures, comments on political issues of the day, or foreign policy saber-rattling on military-economic issues are generally not in violation of our rules,” she told the Knesset via video conference.

MK Michal Cotler-Wunsh, who initiated the hearing, interjected: “I just want to fine-tune [Ostrovsky’s] question: Calling for genocide on Twitter is okay, but commenting on the political situation in certain countries is not okay?”

Twitter attached a warning label to Trump’s May 29 tweet warning people that “when the looting starts, the shooting starts” about the George Floyd riots. Twitter’s label said the tweet “violated Twitter’s Rules about glorifying violence.”

Then in a June 23 tweet, Trump said there would never be an “Autonomous Zone” in Washington, and that “if they try they will be met with serious force!” That tweet was accompanied by a warning that it “violated Twitter’s Rules about abusive behavior… specifically, the presence of a threat of harm against an identifiable group.” 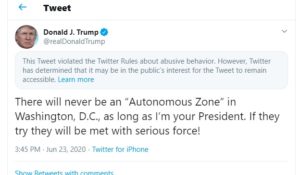 “If a world leader violates our rules but there is a clear interest in keeping that up on the service we may place it behind a notice that provides some more context about the violation and allows people to click through if they wish to see that type of content,” Pettersson told the Knesset.

Twitter disabled the “like” button on the George Floyd post, but decided not to remove it “so the citizens can see what their political figures are commenting [on] and hold them accountable for it online,” said Pettersson.

“And that is what happened for the Trump tweet, that tweet was violating our policies regarding the glorification of violence based on the historical context of the last line of that tweet and the risk that it could possibly inspire harm and similar actions.”

“This is a double standard. This is antisemitism.” 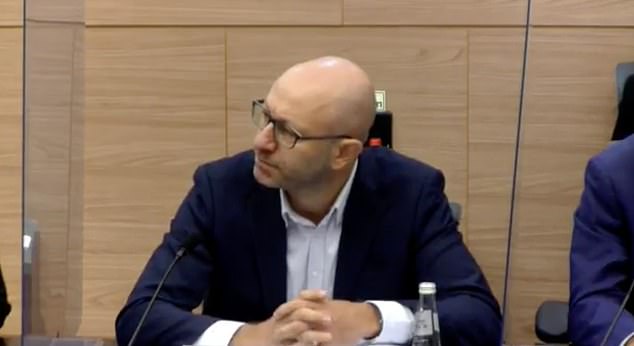 “It took some serious chutzpah to look a room full of Jews and Israelis in the face and say that the Iranian leader’s call for genocide against us is acceptable ‘commentary on political issues of the day’,” Ostrovsky, who is also the executive director of the Israeli-Jewish Congress, said.

“As long as Twitter and social media companies continue to turn their backs to such lethal antisemitism and apply blatant double standards in the manner in which they monitor material posted on their platforms, they will only continue to empower Jew hatred and enable the incitement to violence that inevitably follows,” he added.

THIS is a double standard. This is antisemitism.

Hours later on Wednesday, Khamenei flexed his muscles again, tweeting that the U.S. was “Satan” and Israel its “chained dog.”

Today more than ever, the interest of the Islamic Nation lies in #unity, the type of unity that creates power against enemies and shouts out loudly at the embodied #Satan, the encroaching US, and its chained dog, the #Zionist regime, and stands up against aggression.

The same month Trump posted the George Floyd tweet, Khamenei in his own Twitter post compared the state of Israel to a “cancerous tumor.” He also invoked Nazi Germany by calling for a “Final Solution.”

“The United States condemns Supreme Leader Khamenei’s disgusting and hateful anti-Semitic remarks,” Pompeo wrote. “They have no place on Twitter or on any other social media platform. We know Khamenei’s vile rhetoric does not represent the Iranian people’s tradition of tolerance.”

The Knesset session, which was led by the Committee for Immigration, Absorption and Diaspora Affairs, comes after Twitter came under fire over its delay in removing a series of antisemitic posts written by British rapper Wiley, in which he compared Jews to the Ku Klux Klan and claimed they were behind black slavery.

As Breitbart News reported, Wiley stated he is the reason “Jews are rich” and said, “Jews make me sick.”