The first ever direct commercial flight from Israel to the United Arab Emirates took off Monday morning carrying a senior Israeli and American delegation for talks to cement the recently signed U.S.-brokered agreement to establish ties between the two countries.

The plane, from Israel’s flag El Al carrier, was emblazoned with the word “peace” in Arabic, Hebrew and English. The seat protectors said “Making History” in all three languages and traditional Israeli songs played in the background.

It was an occasion of many firsts: It was the first flight for El Al since the carrier’s fleet was grounded on July 1 over the coronavirus outbreak. It was also the first time an Israeli airplane received permission to fly over Saudi Arabia’s airspace, cutting about four hours of flight time.

"I prayed yesterday at the Western Wall that Muslims & Arabs from throughout the world will be watching this flight recognizing that we are all children of god and that the future does not have to predetermined by the past.” ~ Jared Kushner https://t.co/Jfod1KqK57

Kushner described the move by Saudi Arabia as “very gracious,” and said that it was “a manifestation of what is possible in the Middle East.”

“We can take it as a sign,” Kushner said in remarks carried by The Jerusalem Post. “It’s an encouragement for this progress.”

Commenting on President Donald Trump’s vision for the Middle East, Kushner said  that amid “conflict, chaos and division of the last decades, we do believe that we are ushering in a new hopefulness that peace is possible.”

“One of the great things I love about working with this president is he doesn’t play it safe. He tries to take on challenges. Peace in the Middle East was something that became an actual pursuit,” he said. 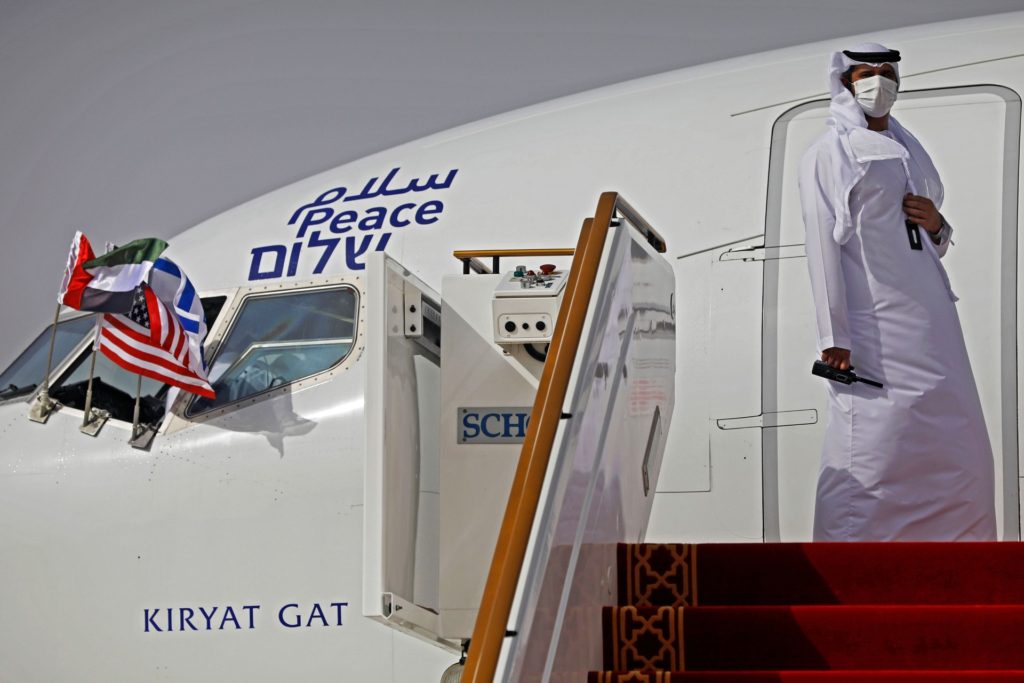 An Emirati official preparing to open the door of the El Al’s airliner, which is carrying a U.S.-Israeli delegation to the UAE following a normalisation accord, upon its arrival at the Abu Dhabi airport in the first commercial flight from Israel to the UAE. A U.S.-Israeli delegation including White House advisor Jared Kushner took off on the historic first direct commercial flight from Tel Aviv to Abu Dhabi to mark the normalisation of ties between the Jewish state and the UAE. (NIR ELIAS/POOL/AFP via Getty Images)

Asked about Israel’s for-now shelved annexation plans,  Kushner said Israel is “going to be focused right now on the relationship with the UAE. I think that’ll make peace, in time, with the Palestinians much more possible.”

Israel agreed to postpone its plans to apply sovereignty over the West Bank as part of the UAE deal.

However, he added that with regards to the peace plan, “President Trump likes to leave his options open.”

The proposal included sovereignty because it was clear that “in the context of any agreement, Israel wasn’t going to give up that territory,” and the US “had to make sure Israel’s security was protected.”

Recognizing Jerusalem as Israel’s capital and allowing for the future recognition of Israeli sovereignty over large parts of the West Bank would “take those provocative issues off the table,” he said.

The White House adviser slammed the Palestinians for rejecting the Trump plan even before it was revealed in January.“Certain people like division and the status quo for whatever reason,” he said.

Kushner said he prayed at the Western Wall on Sunday that Muslims around the world would be watching the historic occasion and “recognizing that we are all children of God and that the future does not have to be predetermined by the past. This is a very hopeful time and I believe that so much peace and prosperity is possible in this region and throughout the world.” 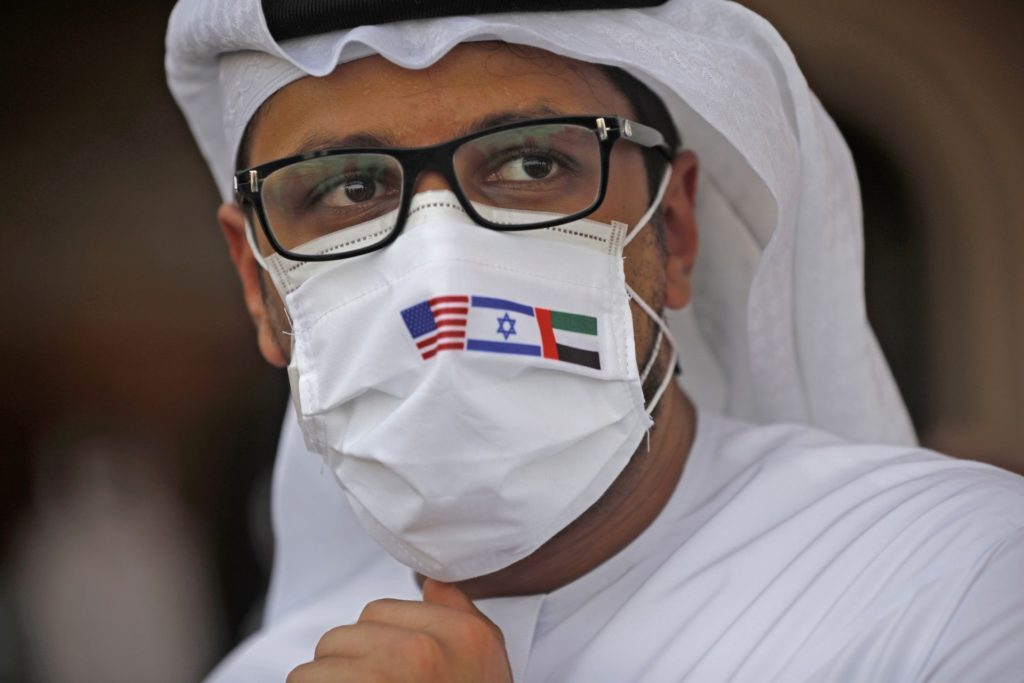 A picture taken on August 31, 2020, shows an Emirati man, wearing a protective mask with the flags of the U.S., Israel and the UAE, upon the arrival of the first commercial flight from Israel, carrying a U.S.-Israeli delegation to the UAE following a normalisation accord, at the Abu Dhabi airport. ( NIR ELIAS/AFP via Getty Images)