Speaking from Abu Dhabi after disembarking the first ever direct Israeli flight to the United Arab Emirates on Monday afternoon, White House senior adviser Jared Kushner hailed the new relationship his country brokered between the UAE and Israel, and criticized the Palestinians for not doing more in the name of peace.

“We can’t want peace more than they want peace,” he said. “When they are ready, the whole region is very excited to help lift them up and help move them forward. But they can’t be stuck in the past.”

The White House adviser slammed the Palestinians for rejecting the Trump plan for peace even before it was revealed in January. “Certain people like division and the status quo for whatever reason,” he said.

Asked about Israel’s for-now shelved annexation plans,  Kushner said Israel is “going to be focused right now on the relationship with the UAE. I think that’ll make peace, in time, with the Palestinians much more possible.”

Israel agreed to postpone its plans to apply sovereignty over the West Bank as part of the UAE deal.

However, he added that with regards to the peace plan, “President Trump likes to leave his options open.”

“It’s been suspended so we can focus on [normalization with Arab world],” Kushner said. “But the Trump peace plan is an operative global document for how to make peace. It gives the Palestinians everything they ever asked for.” 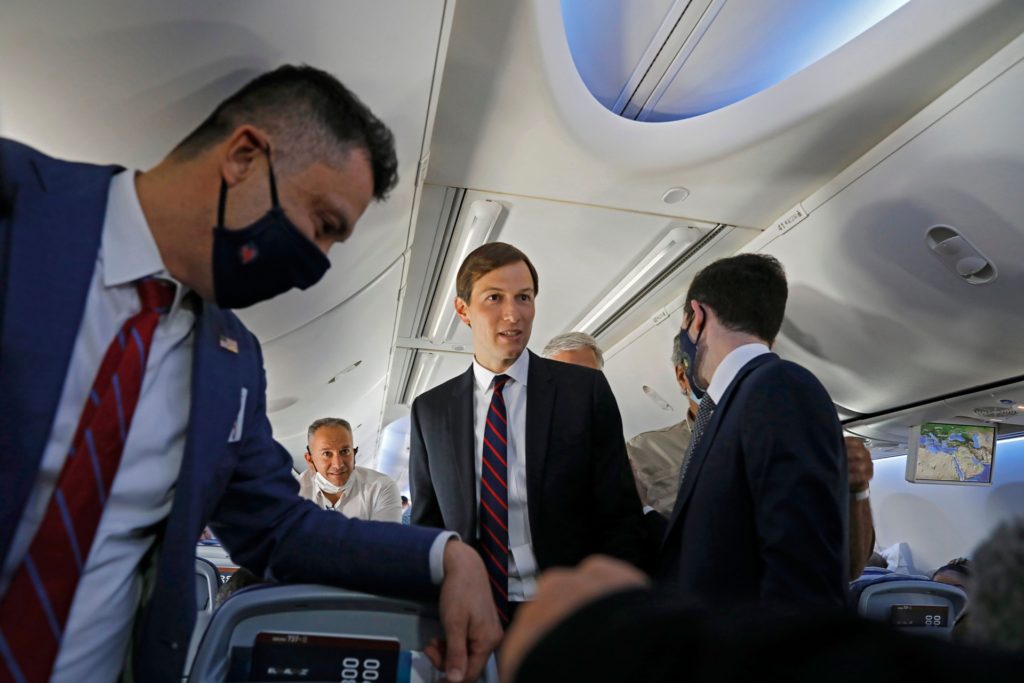 U.S. Presidential Adviser Jared Kushner (C) on board of an El Al aircraft carrying a U.S.-Israeli delegation to the UAE following a normalisation accord, upon landing on August 31, 2020, in the first-ever commercial flight from Israel to the UAE at the Abu Dhabi airport. (NIR ELIAS/AFP via Getty Images)

The proposal included sovereignty because it was clear, “in the context of any agreement, Israel wasn’t going to give up that territory,” which is inhabited by Israelis.

The U.S. “had to make sure Israel’s security was protected.”

Recognizing Jerusalem as Israel’s capital and allowing for the future recognition of Israeli sovereignty over large parts of the West Bank would “take those provocative issues off the table,” he said.

“Mohammed bin Zayed is truly leading the new Middle East,” he said. “The Middle East is filled with brilliant, industrious, tolerant and innovative people, and the future belongs to them,” he added. “I ask everyone today to join us in celebrating this peace, and to help us expand it throughout the region and the entire world.”

He also commended Saudi Arabia, for allowing the Israeli El Al plane to fly over its airspace. 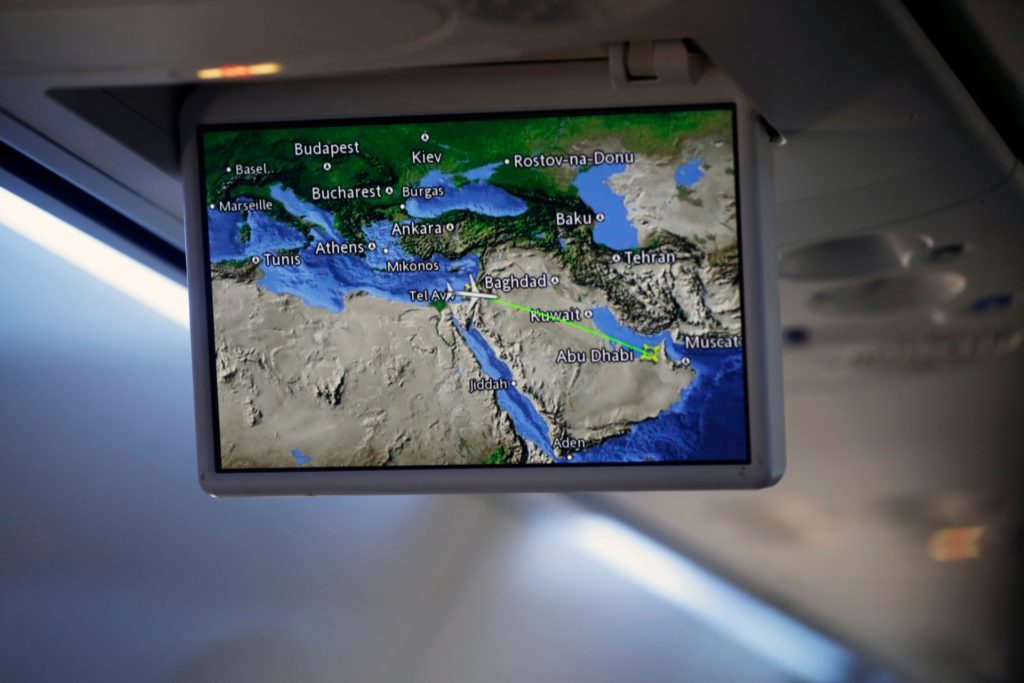 A screen displays a map showing the flight route of Israeli carrier El Al from Israel to Abu Dhabi, on August 31, 2020. (NIR ELIAS/AFP via Getty Images)

The plane was emblazoned with the word “peace” in Arabic, Hebrew and English. The plane’s seat protectors said “Making History” in all three languages and traditional Israeli songs played in the background.

The Palestinian leadership on Monday responded with outrage at the historic flight, again accusing the UAE of “stabbing the Palestinian people in the back.”

Palestinian Authority Prime Minister Mohammad Shtayyeh said the Palestinians were “deeply pained” to see an Israeli aircraft land in the UAE, saying it was “clear and blatant violation of the Arab position regarding the Arab-Israeli conflict.”

He went on to express his hope that “an Emirati aircraft land in the liberated city of Jerusalem,” under Palestinian rule.

“But we are living in the difficult Arab era,” the Palestinian premier concluded.

He praised some Arab states for refusing to normalize their relations with Israel. Morocco and Saudi Arabia have expressly said they would not establish formal ties with Israel at the moment.

“On this occasion, we salute the Arab positions rejecting free normalization with Israel,” Shtayyeh added. “The Arabs foiled the recent trip of U.S. Secretary of State Mike Pompeo, despite the pressure exerted on some Arab countries.”
Senior official from the ruling Fatah party Monir al-Jaghoub said the move would register the UAE “in the black pages of Arab history.” 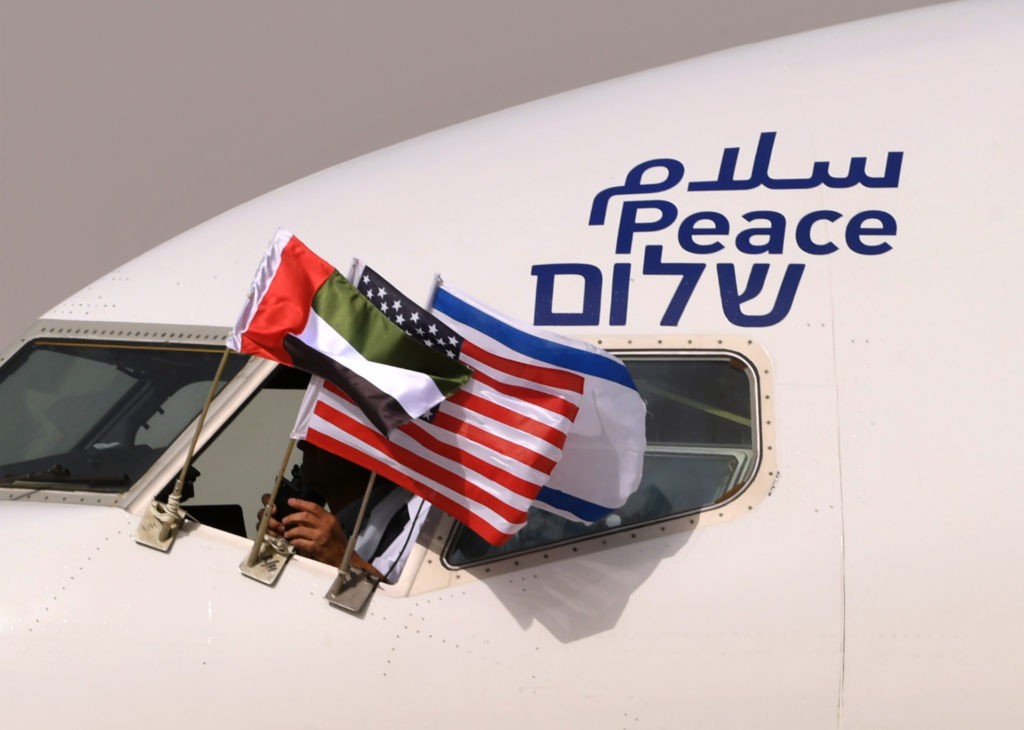 The Emirati, Israeli and U.S. flags attached to an air-plane of Israel’s El Al, adorned with the word “peace” in Arabic, English and Hebrew, upon its arrival at the Abu Dhabi airport in the first-ever commercial flight from Israel to the UAE, on August 31, 2020. (KARIM SAHIB/AFP via Getty Images)

“Anyone who betrays Palestine and forges an alliance with the occupation will end up in the dustbin of history,” al-Jaghoub said.

In his remarks from the tarmac, Kushner assured that the U.S. would do everything to preserve Israel’s qualitative military edge while still leaving the possibility of selling F-35 jets to the UAE.

“The military relationship America has with the UAE is very special just like the relationship between Israel and America,” he said, noting the two countries’ 35-year-old security relationship as well as their shared goals of fighting Iran and the Islamic State.

In a televised speech, Netanyahu echoed Kushner’s words, saying that he had been reassured by US National Security Adviser Robert O’Brien that “the US is absolutely committed to keeping the Israeli military edge. We’ve done this for years, we’ll for sure continue to do this now.”