The Palestinian Authority as well as the Hamas terror group have both lambasted the Israel-Bahrain normalization accord as another “stab in the back” and act of “aggression” by an Arab country.

Turkey and Iran have also condemned the deal.

“This step is a token of support for legitimizing the ugly crimes of the Israeli occupation against the Palestinian people,” a statement by the PA said.

The agreement was “a stab in the back of the Palestinian cause and the Palestinian people,” similar to the UAE-Israel deal announced last month, Ahmad Majdalani, social affairs minister in the West Bank-based PA, said according to AFP. 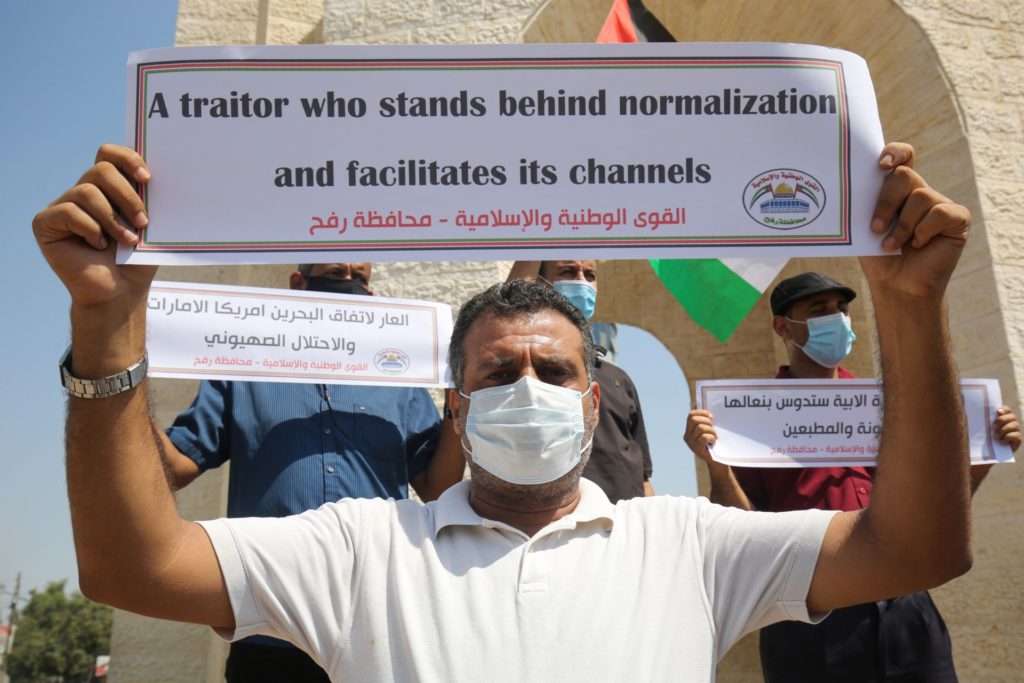 Palestinians carry placards during a protest in Rafah in the southern Gaza Strip, on September 12, 2020, to condemn the normalisation of ties between Israeli and Bahrain. (SAID KHATIB/AFP via Getty Images)

The PA statement also said the deal “torpedoes” the Arab Peace Initiative, a 2002 Saudi-led proposal that calls for full diplomatic ties between Israel and the Arab world in exchange for the establishment of a Palestinian state on 1967 lines with eastern Jerusalem as its capital, as well as a “just” and “agreed upon” solution to the issue of Palestinian refugees. One of the core issues in the conflict is the Palestinian demand for the “right of return” that would see those refugees and their descendants — who now number around 5 million —  return to Israel in any final status agreement. Israel has categorically rejected this demand, deeming it a bid to destroy the Jewish state by demographics.

“The Palestinian leadership rejects this step taken by the Kingdom of Bahrain, and calls on it to immediately take it back, as such step will gravely harm the inalienable national rights of the Palestinian people and joint Arab action,” the PA statement said.

“It is delusional to believe that these concessions at the expense of the Palestinian people’s rights will serve peace, security, and stability in the region,” the statement concluded.

Senior Palestinian official Saeb Erekat said Saturday that Bahrain had promised Ramallah a week ago that they would not normalize with Israel before the establishment of a Palestinian state.

“We were in communication with the Bahrainis, and we spoke with our Bahraini brothers … the king issued a statement saying that they would adhere to the Arab Peace Initiative, and that there won’t be peace, all this was a week ago!” Erekat told the Qatari-backed Al-Jazeera.

Hamas, the terror group that controls the Gaza Strip, called the accord an act of “aggression.”

The Israel-UAE deal was likewise slammed by PA leaders as “despicable,” a “betrayal” and a “stab in the back.”

“We have to fight the virus of normalization and block all its paths before it succeeds to prevent it from spreading,” said Hamas official Maher al-Holy.

Iran slammed the deal as a “betrayal of Islam and a treason against the Palestinian cause.”

Turkey said the pact “will further encourage Israel to continue illegitimate practices towards Palestine and its efforts to make the occupation of Palestinian lands permanent.”

Saudi Arabia was notably silent but it is unlikely the deal went ahead without its consent.

Egyptian President Abdel-Fattah al-Sissi praised the accord as “historic.”

“I hail this important step aimed at consolidating stability and peace in the Middle East, which will achieve a just and permanent solution to the Palestinian cause,” Sissi said in a tweet.

Sissi thanked “all those who helped achieve this historic step.”

The UAE also embraced the deal.

“Congratulations to the Kingdom of Bahrain and Israel on their decision to establish full diplomatic relations. Today marks another significant and historic achievement which will contribute enormously to the stability and prosperity of the region,” tweeted Hend al-Otaiba, the director of strategic communications at the UAE’s Foreign Ministry.

The Israel-UAE accord is scheduled to be signed on Tuesday at a White House ceremony hosted by Trump and attended by Netanyahu and Emirati Foreign Minister Sheikh Abdullah bin Zayed al-Nahyanon.