Exactly one year after the U.S. eliminated Iran’s Major General Qasem Soleimani in a missile strike, the Islamic Republic affirmed it is ready to respond to any American military pressure.

Soleimani, the head of the Islamic Revolutionary Guard Corps (IRGC) Quds Force, had arrived in Iraq from Beirut and was travelling in a convoy of vehicles as it left Baghdad airport when the U.S. military struck.

As Breitbart News reported, the general was killed along with an Iraqi terrorist militia leader. There was fury in Tehran at what Iran’s Foreign Minister Javad Zarif called an “act of international terrorism” and a “dangerous and foolish escalation.”

Over the following days the military leader’s portrait adorned the streets of Tehran. Crowds held up signs demanding revenge. The possibility of Iran and the U.S. going to war seemed real.

Since then Iran has been impotent in its efforts to frustrate U.S. ambitions across the Middle East, save for rhetoric and bloodcurdling threats of impending cataclysmic attacks against U.S. interests.

On Friday, the chief of the entire IRGC, General Hossein Salami, said Iran was fully prepared to respond to any U.S. military pressure.

POLLAK: Soleimani's death actually improves the prospects for peace by encouraging the Iranian people to stand up against their rulers. https://t.co/yeVEFebZKu

“We will give our final words to our enemies on the battlefield,” he said at a ceremony at Tehran University to mark the anniversary.

In a letter to the United Nations Security Council, Iran condemned U.S. “military adventurism” in the Gulf and the Sea of Oman, and “fake information, baseless accusations and threatening rhetoric” against Tehran.

A day earlier, the U.S. military flew two nuclear-capable B-52 “Stratofortress” bombers over the Gulf in a message of deterrence to Iran, the latest in a series of such moves in the past month, as Breitbart News reported.

“New intelligence from Iraq indicate(s) that Israeli agent-provocateurs are plotting attacks against Americans – putting an outgoing Trump in a bind with a fake casus belli (act justifying war),” Iranian Foreign Minister Mohammad Javad Zarif said in a tweet on Saturday.

“Be careful of a trap, @realDonaldTrump. Any fireworks will backfire badly,” Zarif wrote.

New intelligence from Iraq indicate that Israeli agent-provocateurs are plotting attacks against Americans—putting an outgoing Trump in a bind with a fake casus belli.

Be careful of a trap, @realDonaldTrump. Any fireworks will backfire badly, particularly against your same BFFs.

1:00 am at Baghdad Int Airport

Despite #COVID19, Iraqis felt they had to commemorate the martyrdom of General Qasem Soleimani, Abu Mahdi al-Muhandis & their companions in the war on ISIS

They protested against the US occupation & reaffirmed the strong bonds between Iraq & Iran pic.twitter.com/JXI8ivn2SA

Posters of the dead men adorned both sides of the road, which was lined with tents that served food and drinks for those who walked the highway.

The scene of the bombing was turned into a shrine-like area sealed off by red ropes, with a photo of Soleimani and al-Muhandis in the middle, as mourners lit candles. Shrapnel marks were still visible on the asphalt and concrete blast walls n the area.

The wreckage of two cars was on display on the road outside the airport as a reminder of the attack.

Those who attended shouted “Death to America” and “Death to Donald Trump” while burning U.S. flags and promising instant revenge on any U.S. ally. 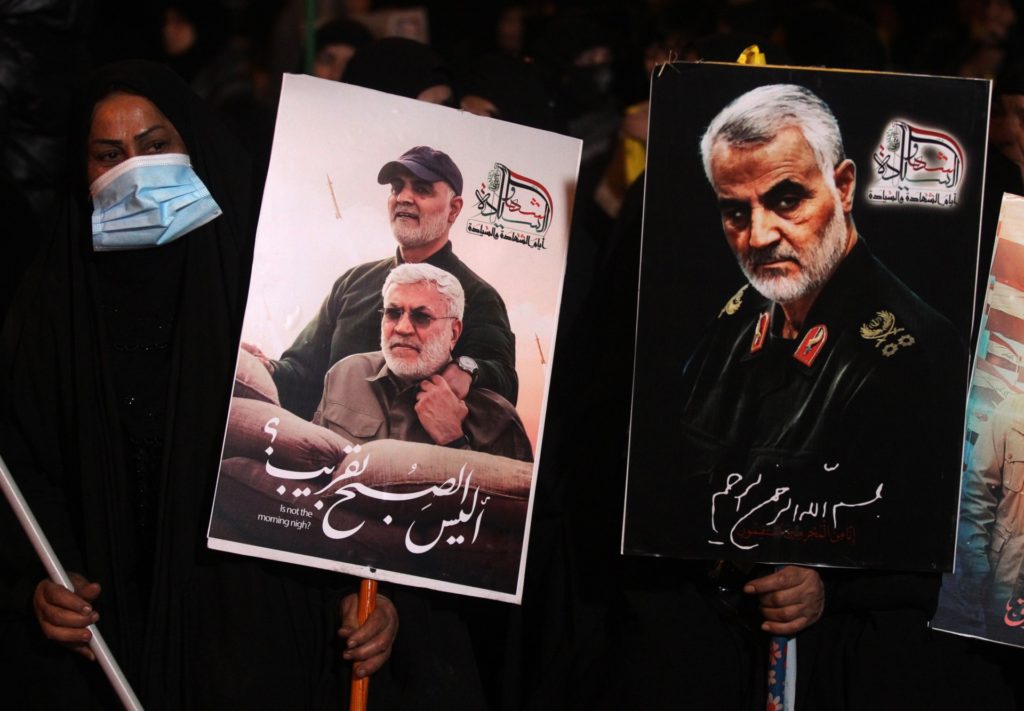 People carry portraits of late Iraqi commander Abu Mahdi al-Muhandis and Iranian commander Qasem Soleimani at Baghdad Airport, in Baghdad on January 2, 2021, at the site of their killing. ( AHMAD AL-RUBAYE/AFP via Getty Images)

Carrying Iraqi and militia flags and posters of the two men, thousands of Iraqis returned Sunday to marched toward Tahrir Square for a new rally, demanding the withdrawal of U.S. troops in implementation of the parliamentary resolution.

The event was organized by mostly Iran-backed militias known as the Popular Mobilization Forces.