Iran and Western countries are in a “fundamentally broken, abusive relationship” and the West is allowing it to happen by constantly pandering to the regime’s blackmail, an expert on Iranian affairs told Breitbart on Tuesday.

“It’s extraordinary that Iran is treated as a normal country as opposed to the outlaw, pariah state it is,” The Jerusalem Post‘s oped editor and Middle East affairs analyst Seth Frantzman said.

His remarks came on the heels of Tehran’s announcement Monday it has begun enriching uranium up to 20 percent, far beyond the limits set out in the 2015 nuclear accords.

Frantzman said the move was a “game of smoke and mirrors” that is “designed so transparently as blackmail” but the world nonetheless cowers.

“Every few years, they hold up the bogeyman of [uranium] enrichment and say, ‘if you don’t give us things then we’ll threaten you with nuclear weapons,'” he said.

“Which country is allowed to do that?”

“I have no doubt that the heroic national resistance of Iran is going to compel the future U.S. government to bow… and the sanctions will be broken.” https://t.co/lKy6pbFp7P

The news that President Hassan Rouhani had given the order to achieve 20 percent uranium purity at the underground Fordo facility comes amid rising tensions with the U.S. a year after the assassination of top Iranian commander, Qasem Soleimani.

Iran also seized a South Korean-flagged chemical tanker on Monday, as Breitbart News reported, in order to “create environmental and chemical pollution in the Persian Gulf.”

According to Frantzman, Iran’s capture of the tanker is nothing short of piracy.

“The Iranian regime is a pirate regime,” he said. “And everyone’s treating it like it’s normal.”

The Obama-led nuclear deal, from which President Donald Trump withdrew in May 2018, delineates an enrichment limit of 3.67 percent. Tehran has since moved to 4.5 percent.

President-elect Joe Biden has vowed to return to the agreement. 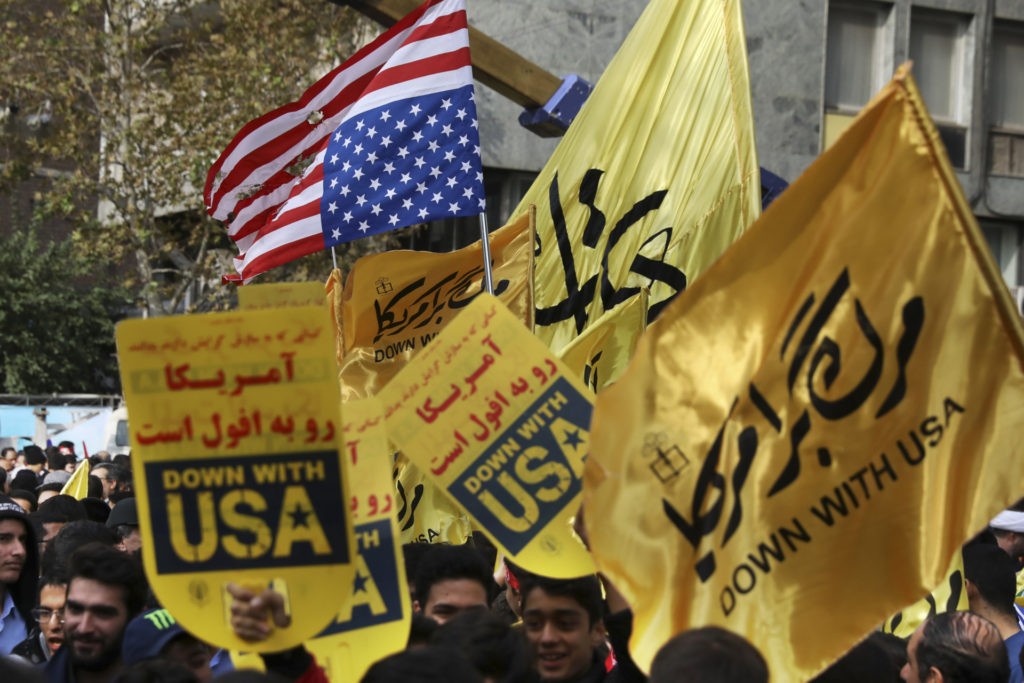 Demonstrators hold anti-U.S. banners and a torn makeshift U.S. flag upside down in an annual rally in front of the former U.S. Embassy in Tehran, Iran. Reviving decades-old cries of “Death to America,” Iran marked the 40th anniversary of the 1979 student takeover of the U.S. Embassy in Tehran and the 444-day hostage crisis that followed as tensions remain high over the country’s collapsing nuclear deal with world powers. (AP Photo/Vahid Salemi)

Iran has repeatedly vowed to avenge the November killing of its nuclear weapons mastermind Mohsen Fakhrizadeh, which it has blamed on Israel. Tehran has since passed a law calling for the production and storage of “at least 120 kilograms per year of 20 percent enriched uranium” and to “put an end” to the IAEA inspections at nuclear facilities.

Iran’s decision to continue violating its commitments, raise the level of enrichment and advance its industrial capacities for underground uranium enrichment can not be explained in any way other than the continued realization of its plans to develop a military nuclear program.