The article the headline linked to did not use the derogatory, racialized term “trailer trash” — typically reserved for white Americans of lower socioeconomic class, defined by their ability to only afford a mobile home. It did, however, question the authenticity of the riot in question, calling it a “theater insurrection” staged by unspecified actors to warn the public not to attempt an actual attack on American institutions. 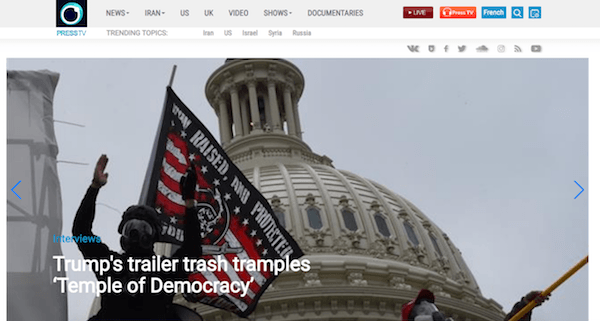 Supporters of President Donald Trump attacked and burglarized the U.S. Capitol on January 6, 2021, after Trump himself delivered a speech at a rally in Washington, D.C., in which he once again claimed that he had not lost the 2020 presidential election. Trump urged the crowd to march to the Capitol and claimed he would walk with them, but did not do so.

The riot resulted in extensive property damage and five deaths, including that of Capitol Police officer Brian Sicknick. It failed in its goal of preventing Congress from certifying President-elect Joe Biden’s victory.

The Iranian Islamic regime has repeatedly attempted this week to use the riot to argue that America’s influence abroad is waning, that free societies are not preferable to authoritarian theocracies, and that Western human rights norms must be ignored. Last week, PressTV claimed that racism — specifically, the racism allegedly inherent in the Electoral College — caused the riot.

The “trailer trash” article the propaganda outlet ran on Monday was an interview with Daniel Patrick Welch, a PressTV mainstay and anti-American “singer and songwriter” who nonetheless lives in Massachusetts. Welch claimed that all Americans, presumably not including himself, “are in a sort of permanent adolescence” and cannot understand the impact of the riot last week.

“But U.S. voters need to look at this closely: this is what the U.S. government does to countries around the world on a daily basis,” Welch claimed, without offering any examples of the United States generating a mob to attack any federal legislature. “There is no political consciousness, no remorse. The U.S., through the CIA and other proxy means, has been complicit in over 80 coups and manipulated elections worldwide. All the time!”

Welch went on to claim that America has not had free and fair elections in recent memory and that “the system is such a shitshow that all elections are a sham.” Appearing to agree with the rioters, Welch goes on to call President-elect Biden “a Manchurian plant, an installed restoration of the Old Order, blunting this huge impetus for change that was both left and right.”

“It is unfathomable that he legitimately won the Democrat nomination,” Welch claimed, apparently making a different argument than the rioters — that Biden may have won the general election, but not the primary against other Democrats.

PressTV gave Welch a platform to call the riot a “theater insurrection” meant as “almost a kind of inoculation: Don’t try this at home.”

The commentator also referred to Trump as “Demented Mango.”

The interview was not the first time that this specific PressTV commentator claimed America did not have free and fair elections. Following the presidential election in November, PressTV published what appeared to be an unedited screed by Welch in which he claimed America was an “oligarchy” and the only thing November determined was “who will be dropping the bombs the next time.”

Elsewhere in its pages, PressTV blamed racism for the riot Wednesday. Those participating in the riot made clear their belief that Trump won the election and that they intended to stop the legal process that certifies Biden as president-elect. They did not make any public arguments against racism.

“To understand what took place on Wednesday … will help one to understand the history of the country. The event epitomizes a nation, which was built and has thrived on privilege for some and sacrifice and death for others,” a column on PressTV last week claimed. “One may ask, how does an event like the taking over of the Capitol relate to the racist roots of the United States? The answer is multifaceted.”

Ultimately, the Iranian outlet concluded that the Electoral College was created to allow white politicians to “use Blacks to gain more political power, without even giving them the right to vote or any rights at all for that matter.”

“You saw the people who breached the U.S. Congress. The Americans sought to do the same in Iran. They wanted to create chaos and trigger a civil war,” the supreme leader claimed. “The U.S. sees its interests in regional instability under the current circumstances, unless it is the dominant power in the region.”

Khamenei is the “supreme leader” of Iran, the only person with real authority in the country. He is unelected and has been in power since 1989. While Iran allows citizens to vote for local representatives and its president, Khamenei exclusively chooses who appears on the ballot, keeping dissidents or even supporters insufficiently zealous out of the running.