The Biden administration’s rumored appointment of former national security official Robert Malley as special envoy to Iran has sparked an outcry, with critics saying the move would only benefit the ayatollahs and would send a “chilling signal” the new American administration does not care about Tehran’s regional terror nor its human rights infractions.

Under former President Barack Obama, Malley, then a national security official, was one of the most enthusiastic proponents of the fIran deal. He was also initially kicked off of Obama’s first presidential campaign after reports emerged he had met with members of the Hamas terror group.

“The ayatollahs wouldn’t believe their luck if he is selected,” he said.

It’s deeply troubling that President Biden would consider appointing Rob Malley to direct Iran policy. Malley has a long track record of sympathy for the Iranian regime & animus towards Israel. The ayatollahs wouldn’t believe their luck if he is selected. https://t.co/caxHhiXjKn

Malley has called on Israel to include Hamas leaders in any negotiations on a final status resolution to the Israeli-Palestinian conflict.

This is patently false, however. Trump’s crippling sanctions have caused Iran to cut its terror expenditures by 25 percent and have yielded the way for Biden to achieve much more leverage in his stated quest to reenter the 2015 JCPOA nuclear deal as negotiated by former U.S. Secretary of State John Kerry. 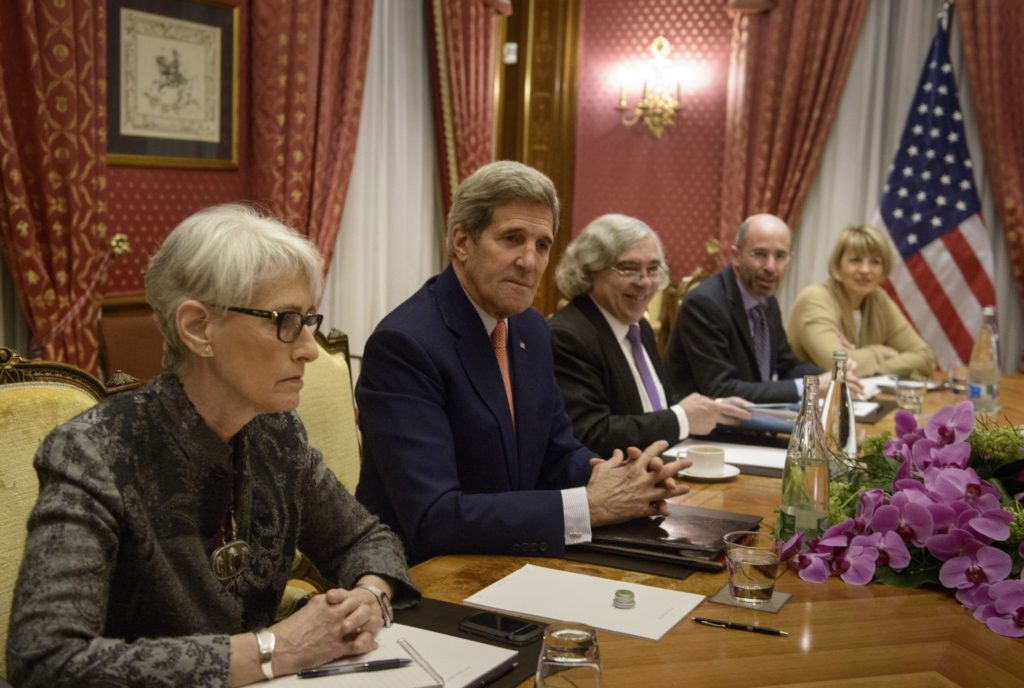 From left: U.S. Under Secretary for Political Affairs Wendy Sherman, U.S. Secretary of State John Kerry, U.S. Secretary of Energy Ernest Moniz, Robert Malley of the U.S. National Security Council and European Union Political Director Helga Schmid wait for a meeting with the Iranian foreign minister Javad Zarif and others at the Beau Rivage Palace Hotel March 28, 2015 in Lausanne. Iranian officials are in Switzerland to continue negotiations on their nuclear program with other world powers. (BRENDAN SMIALOWSKI/AFP via Getty Images)

Malley also condemned the targeted U.S. killing of top Iranian commander Qassem Soleimani as well as the killing of nuclear scientist Mohsen Fakhrizadeh, said to be the mastermind behind Iran’s nuclear weapons program. Malley claimed that Fakhrizadeh’s death would “make it all the more difficult for [Trump’s] successor to resume diplomacy with Iran.”

As Zoa notes, Malley has accused Israel of repeatedly “exaggerating the Iranian threat” and even excused Iran from giving up its nuclear weapons program, saying: “why would the [Iranian] regime volunteer a concession that arguably would leave it weaker in a hostile environment?”

In 2007, Malley also called on Israel to give back the Golan Heights, the strategic northern plateau which the Jewish state captured after Syria attacked in the 1967 Six Day War.  In his argument, Malley claimed that Syria is “unlikely to sponsor militant groups, . . . [or] destabilize the region . . . once an agreement has been reached.” He also dismissed the fact that Syria was at that time providing the Hamas and Hezbollah terror groups with bases to attack Israel. That year was also when Israel destroyed a nuclear reactor in Syria.

Tobin writes that Malley is “a perfect example of establishment thinking that is not merely wrongheaded, but has led to disastrous decisions that both made the world less safe and made peace in the Middle East less likely.”

[T]he notion that Iran’s regime does not respond to pressure is a talking point of the Iranian regime, especially Foreign Minister Mohammad Javad Zarif. It also happens to be false. Obama’s maximum pressure campaign between 2011 and 2013 ultimately coerced the regime to enter open nuclear negotiations with the U.S., China, Russia, France, Germany and the U.K.

Lake goes on to cite a letter to Secretary of State Antony Blinken signed by 12 former Iranian hostages and human-rights activists calling on him not to appoint Malley.

Appointing him “would send a chilling signal to the dictatorship in Iran that the United States is solely focused on re-entering the Iran nuclear deal, and ignoring its regional terror and domestic crimes against humanity,” they write. “It would also send a signal to Iranians, Syrians, Iraqis, Lebanese, and all others that are being repressed by the Iranian regime and its proxies that the Biden administration does not care about their human rights.”