A militia believed to be tied to the Iran-backed Popular Mobilization Forces (PMF) took responsibility on Tuesday for a rocket attack on Erbil, Iraq, that resulted in damage to the Chinese consulate there.

Tuesday marks the 50th anniversary of diplomatic relations between communist China and Iran.

The attack on Monday, claimed by an allegedly newly-formed militant group named “Saraya Awlia al-Dam (Guardians of Blood Brigades),” featured about 14 rockets bombing various parts of the regional capital, including Erbil’s airport, residential areas, and at least one market. Local authorities confirmed at least one death and eight injuries, including civilians and at least one U.S. service member. Iraq’s Interior Ministry described the attack as similar in “method and technique” to past bombings of Erbil.

Erbil is the capital of the Kurdistan Regional Government (KRG) of Iraq, an autonomous territory. Many nations keep consulates in Erbil to maintain communication with the Kurdish government apart from ties to Baghdad. Erbil is considered one of Iraq’s safest cities, in part due to the prowess of the KRG’s military, the Peshmerga. The Peshmerga played a key role in the demise of the Islamic State during its attempt to seize the country.

The Kurds have long been at odds with the government in Baghdad, which is currently dominated by Shiite Muslim leaders and has legalized the PMF, which includes terrorist elements, as part of the official Iraqi armed forces. The PMF have close ties to the Iranian government, an ally of China’s.

Chinese Foreign Ministry Mohammad Javad Zarif published a column on the two nations’ friendship in the People’s Daily, the official newspaper of the Communist Party of China, the day before the attack.

According to the Kurdish outlet Rudaw, the militia that took responsibility for the attack used “propaganda channels” typically reserved for PMF members, suggesting they are a new force in the PMF. They declared the attack a success.

“We were able to perform a strong attack with 24 rockets that hit its targets precisely after the failure of the CRAM defense system and the coalition missiles from stopping it,” the Saraya Awlia al-Dam statement read in part. The statement claimed that the rockets were meant to target a U.S. base about 37 miles from Erbil, one that Rudaw notes is the closest to Iran’s national borders.

Rudaw listed “the Chinese consulate, a livestock market, and residential areas” as the main victims of the rocket strikes.

Dramatic footage, which Breitbart News could not independently confirm as legitimate, surfaced on social media on Monday night claiming to show a rocket landing near the vicinity of the Chinese consulate in Erbil. Unconfirmed images also appeared to show damage to a wall on consulate property.

The moment a missile fell in front of the #Chinese consulate in #Erbil. pic.twitter.com/Uh1D21aVxO

Continued heavy police presense outside the Chinese Consulate, #Erbil which was struck in the rocket attack this evening. pic.twitter.com/kYLFm7rncJ

The Erbil consulate issued an official statement on Tuesday condemning the bombing and insisting that no staff were injured by any rocket fire.

“We strongly condemn the rocket attack on the city of Erbil on the night of 15 February which caused the casualties of innocent civilians and property loss, and extend the sincere condolences to the families of the victims and the wounded,” the Chinese consulate said in a statement posted to Facebook. “We oppose any violent actions that endanger the peace and stability of Kurdistan Region of Iraq. We appreciate the relevant departments of KRG for their prompt response and timely handling of the attack for protecting the civilians and ensuring the safety of diplomatic missions.”

“All the personnel of our Consulate General are safe,” the statement concluded.

The Chinese Foreign Ministry is not currently holding its daily press briefings due to the Lunar New Year holiday, so Beijing has not weighed in directly on the matter at press time.

Iran’s government media outlet PressTV reported on the attack but did not mention any damage to the Chinese consulate or identify the group responsible as having ties to the PMF or to Iran. It instead blamed a general atmosphere of “anti-American sentiments” in the country for the violence as a result of the airstrike that eliminated Iranian general Qasem Soleimani, the head of the Islamic Revolutionary Guard Corps (IRGC) Quds Force and a key liaison between Tehran and the PMF. Killed alongside Soleimani was the head of the Hezbollah Brigades, one of the largest PMF members, Abu Mahdi al-Muhandis. 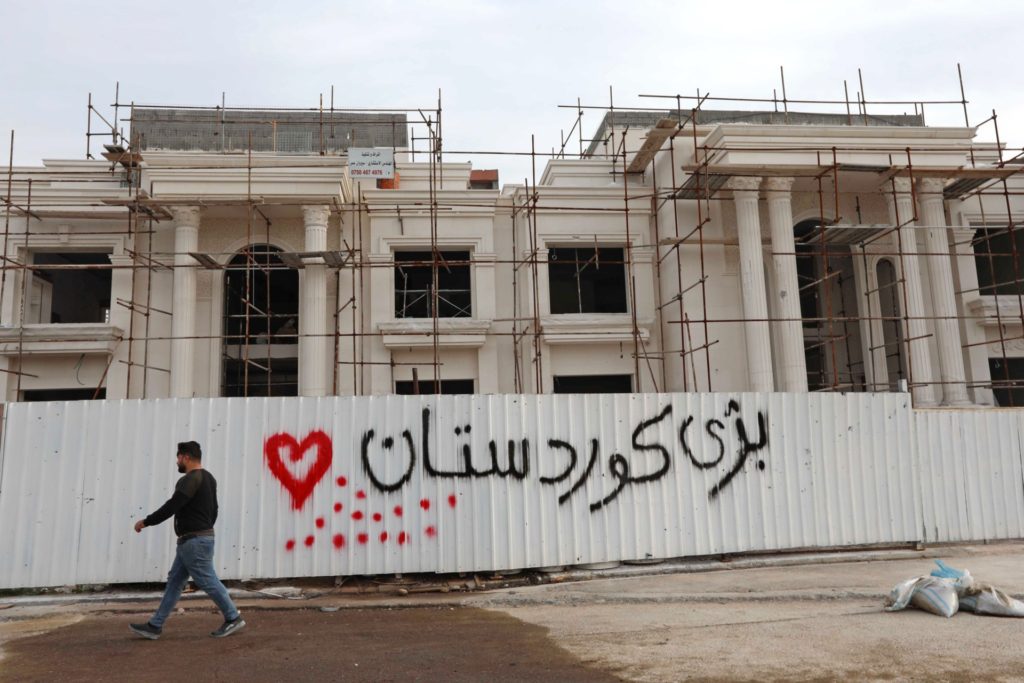 A man walks past a graffiti reading in Kurdish “Long live Kurdistan, near the scene of a rocket attack in Arbil, the capital of the northern Iraqi Kurdish autonomous region, on February 16, 2021. The United Nations warned Iraq could spin out of control after a rocket attack on the Kurdish regional capital Erbil killed a foreign contractor and wounded several Iraqis and foreigners. (SAFIN HAMED/AFP via Getty Images)

“Iran-China relations have withstood the test of time, especially in the difficult time of the coronavirus pandemic … The two countries have unconditionally backed each other in various fields and achieved useful results,” Zarif wrote in his column, expressing hope to see China’s Belt and Road Initiative (BRI), an infrastructure plan intended to indebt developing nations to China, would expand in Iran.

The administration of President Joe Biden condemned the bombing late on Monday.

“We are outraged by today’s rocket attack in the Iraqi Kurdistan Region,” Secretary of State Antony Blinken said in a statement. “Initial reports indicate that the attacks killed one civilian contractor and injured several members of the Coalition, including one American service member and several American contractors.”