White House press secretary Jen Psaki said on Monday the Administration is “alarmed by the frequency of Houthi attacks on Saudi Arabia,” and understands the Saudis face “genuine security threats from Yemen and others in the region.”

“Escalating attacks like these are not the actions of a group that is serious about peace,” Psaki said, to unintentionally comical effect, given both the behavior of the Houthis and their constant threats to accelerate their attacks even further.

The escalating attacks Psaki referred to was the drone and missile strike against civilian oil facilities in Saudi Arabia on Sunday. The Saudi military coalition intercepted another armed Houthi drone on Tuesday, this one targeting Khamis Mushait, a major commercial hub and one of the largest cities in Saudi Arabia.

U.S. State Department spokesman Ned Price on Monday called upon the Houthis to “demonstrate their willingness to engage in a political process.”

“They need to quite simply stop attacking and start negotiating. Only then will we be able to make progress towards the political settlement that we’re after,” Price said.

Price called the Houthi drone and missile attacks against Saudi targets “egregious,” “unacceptable,” and “dangerous,” noting they endangered both Saudi and American civilians working at the targeted facilities.

“We are and remain deeply concerned by the frequency of Houthi attacks on Saudi Arabia. Attacks like these are not the actions of a group that is serious about peace,” Price said, hitting the same talking points as Psaki.

The Houthis do not generally present themselves as a group that is “serious about peace.” Their motto is “Allah is Great, Death to America, Death to Israel, Curse the Jews, Victory for Islam.”

The Houthis are strongly supported by Iran, the world’s leading state sponsor of terrorism, and were mentored by Iran’s terrorist proxy Hezbollah. The Yemeni insurgents had just been caught stealing humanitarian aid when the Biden administration decided they should no longer be regarded as terrorists. 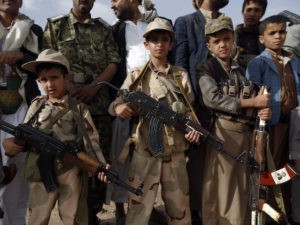 The same Biden officials now claiming to be shocked by the Houthis’ continuing terrorist attacks on Saudi civilians claimed in February they were “clear-eyed” about the “malign actions and aggression” of the militants, but wanted them delisted because they thought it would make shipping humanitarian aid to sick and starving Yemenis easier. The Houthis are still blocking humanitarian shipments and extorting money from aid workers; last week the Biden administration sanctioned two more Houthi leaders for doing so.

Jonathan Schanzer of the Foundation for Defense of Democracies told CNBC on Tuesday that President Joe Biden’s approach to the long-running war in Yemen is “likely to make the conflict grow worse,” because the Houthis are no longer under any pressure to make concessions for peace.

“The reality that we are now facing is that we’ve taken really all of our other leverage off the table, and we’re simply going to hope that an Iran-backed militia will come to the table and act reasonably. Unfortunately, I think this is wishful thinking,” Schanzer said, pointing to the increasing tempo of Houthi attacks after Biden removed them from the terrorism list and signaled U.S. support for the Saudi intervention in Yemen was coming to an end.

Schanzer said the Biden administration “has itself tied in knots a bit,” so the Saudis are unlikely to “dial back on their reprisals” against Houthi terrorism, making it likely the war in Yemen will escalate again.