Israeli officials have criticized Ukraine President Volodymyr Zelensky for invoking the Holocaust during his speech about Russia’s invasion.

Speaking via Zoom before the Israeli Knesset, Zelensky, who is Jewish, reportedly dedicated “the lion’s share of his speech to the Holocaust,” according to the Jerusalem Post, even going as far to say that Russia was using “Nazi terminology” as it plans to carry out a “Final Solution” against the Ukrainian people.

“They are using the terminology of the Nazi party. This is a tragedy. When they wanted to destroy Europe and have it surrender, they didn’t want to leave any of you remaining. And now us. They called it the final solution to the Jewish question,” Zelensky said.

“We can ask why we can’t receive weapons from you, why Israel has not imposed powerful sanctions on Russia or is not putting pressure on Russian business. Either way, the choice is yours to make, brothers and sisters, and you must then live with your answer, the people of Israel,” he added. 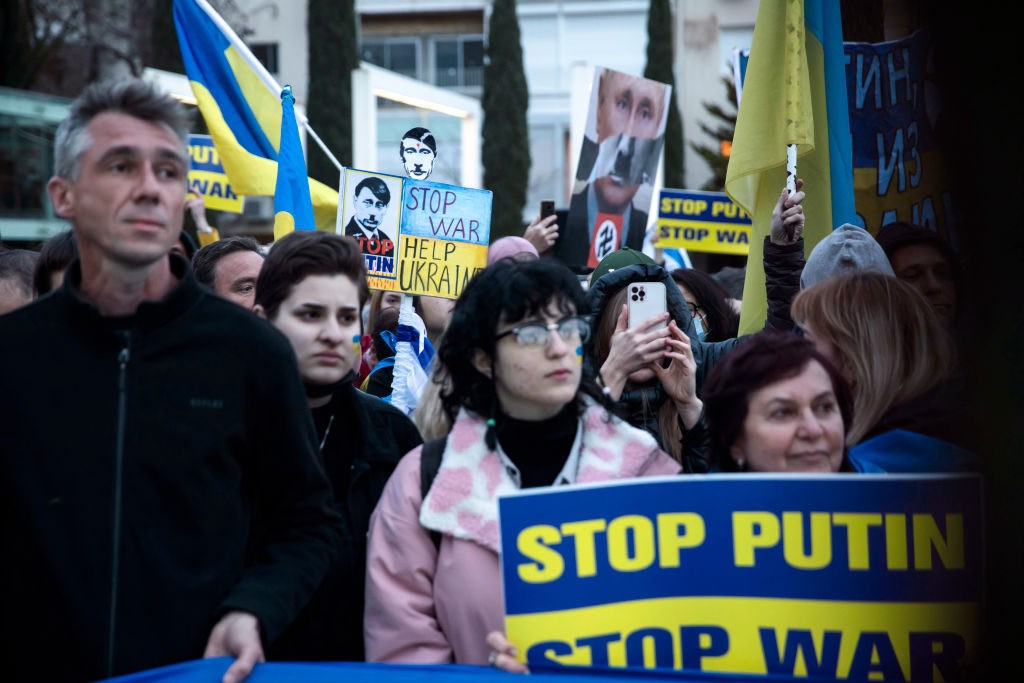 Demonstrators hold flags and placards as they gather to watch Ukrainian President Volodymyr Zelensky’s speech to the Israeli parliament as it broadcasted at Habima Square on March 20, 2022 in Tel Aviv, Israel. (Amir Levy/Getty Images)

Though Western leaders have typically responded enthusiastically to Zelensky’s speeches, Israeli leaders were more measured. While most sympathized with Zelensky’s plight, most believed his invocation of the Holocaust, in which Nazis murdered six million Jews, went too far.

“I don’t understand Ukrainian, but if the translation I heard is accurate, Zelensky asked us to treat the Ukrainians like they treated us 80 years ago. I’m sorry, but I think we will have to reject that request. We are, after all, a moral nation,” tweeted Religious Zionist MK Simcha Rothman.

“I appreciate the President of Ukraine and support the Ukrainian people in heart and deed, but it is impossible to rewrite the terrible history of the Holocaust,” Communications Minister Yoaz Hendel tweeted. “Genocide was also committed on Ukrainian soil. The war is terrible, but the comparison to the horrors of the Holocaust and the final solution is outrageous.”

Criticism of Zelensky's speech rolling in from some Israeli officials, accusing him of minimizing the Holocaust and whitewashing Ukrainians' role

Minister Yoaz Hendel: "The war is terrible, but the comparison to the horror of the Holocaust and the final solution is outrageous."

Likud MK Yuval Steinitz said that Zelensky’s speech would borderline on “Holocaust denial” if it were given during non-war times.

“Every comparison between a regular war, as difficult as it may be, and the extermination of millions of Jews in gas chambers in the framework of the Final Solution, is a total distortion of history,” said Steinitz. “The same is true for the claim that Ukrainians helped Jews in the Holocaust.”

“The historic truth is that the Ukrainian people cannot be proud of its behavior in the Holocaust of the Jews,” he added. “None of that changes the fact that despite the outrageous use of the Holocaust, we must continue humanitarian aid to the citizens of Ukraine suffering from the war and pray for its end to come soon.”