The open borders plan came from Leon Fresco, an immigration activist now working in D.C. for foreign clients, including tens of thousands of Indian tech-workers. In 2013, Fresco was Schumer’s Democrats’ chief immigration lawyer as they wrote up the disastrous “Gang of Eight” amnesty bill which prompted the public to elect pro-American Donald Trump in 2016. Fresco Tweeted April 1:

Any admin changes for border surge will be blocked by Courts, and Congress will not enact a 1-sided solution on enforcement … Congress will not pass enforcement-only bill. Such efforts will be tried and will fail. At that point, CIR-type [Comprehensive Immigration Reform] bill possible.

Fresco made his claim after Trump used Twitter to slam the Mexican government for refusing to stop a march of 1,000-plus central America migrants towards Texas, and to slam the Democratic Party for refusing to close the legal loopholes — including “catch and release” — which allowed at least 400,000 Central Americans migrants into the United States during former President Barack Obama’s eight years in office.

Until Sunday, Trump had offered to approve an amnesty for at least 1.8 million illegals in exchange for closing those loopholes, ending the visa lottery, winding down chain migration and building the border wall. Schumer’s Democratic Senators — and at least ten business-first Republicans — rejected that compromise in a February 15 Senate vote.

Border Patrol Agents are not allowed to properly do their job at the Border because of ridiculous liberal (Democrat) laws like Catch & Release. Getting more dangerous. “Caravans” coming. Republicans must go to Nuclear Option to pass tough laws NOW. NO MORE DACA DEAL!

Fresco responded via Twitter by saying the courts will use the existing laws to keep the border topen for the migrants, and Democrats will block any upgraded border laws until Trump agrees to “Comprehensive Immigration Reform,” which is a Democratic euphemism for a massive amnesty.

“What POTUS will find after today’s tweets is that any admin changes for border surge will be blocked by Courts, and Congress will not enact a 1-sided solution on enforcement. Even though POTUS currently says “no deal,” the chances for [an amnesty] deal now higher.

If border surge happens this spring, POTUS has limited options. Courts blocked everything Obama did to stop 2014 surge. POTUS needs Congress [to get around courts]. But Congress will not pass enforcement-only bill. Such efforts will be tried and will fail. At that point, CIR-type [Comprehensive Immigration Reform] bill possible.

and by CIR-type bill, I am just saying that DACA alone for what is needed on the border will likely not be supported by Dems. That type of trade will only work in something larger (and that something larger would, of course, need to include backlog relief). All will depend on..

…Whether POTUS wants to pass laws to provide more authority to address illegal immigration or whether he thinks he can survive a border surge by simply blaming Dems. We will all find out together.

Fresco’s threat comes as a group of more than 1,000 Central Americans, mostly young men, is collectively marching through Mexico to ask for asylum at the Texas border. They are expected to arrive late March, unless the Mexican government sees an incentive to stop them.

My first dispatch while on the trail with hundreds of Central Americans who have boldly crossed immigration check points, military bases, & police in a desperate, sometimes chaotic march toward the US https://t.co/cf2rnzbp3n

Beautiful: Immigration agents abandoned their posts as 1,500 people on Refugee Caravan, mainly from Honduras, crossed into Mexico from Guatemala yesterday with goal to reach US (video via @pueblosf) pic.twitter.com/QsduFwN747

Fresco’s threats rest on the courts’ continued backing for the claim that current laws require the border patrol to allow almost anyone into the country to apply for legal asylum if they claim to have a “credible fear” of persecution or torture.

Obama’s interpretation of the law laid out a welcome mat for migrants, especially because his policy also allowed migrants into freely enter the United States — and get work permits — once the number of admittees exceeds the total number of detention-beds funded by Congress. In fact, Obama let so many migrants into the United States that he backlogged the asylum courts, so giving the migrants several years to find valid legal arguments to stay in the United States.

The Democrats’ opposition to a border-loophole reform was underlined on January 16 by Democratic Sen. Dick Durbin, who suggested to DHS chief Kirstjen Nielsen that Trump’s legal reforms could kill many innocent young women:

One of the things on your must-have list, which you passed out on Tuesday and brought to us again today in a different form, relates to asylum protection. and you use the example of a child at the border of being coached, to use the words “credible fear” and that triggers a certain reaction. But I would like to call your attention to something that I hope can add another perspective. It’s an article entitled “When Deportation Is a Death Sentence,” written by Sara Stillman, published in the New Yorker. I want you to read it. I hope you’ll read it. It talks about what happens when the agents who are involved in this don’t ask the right question, don’t hear the answer, and send many women back to their death.

Fresco’s hard-nosed tactics spotlight the Democrats’ determination to advance their political goals via immigration, despite the huge impact on blue-collar Americans.

For example, on February 15, Democrats back a proposal by main GOP Sen. Susan Collins that would have established a double-amnesty — a “prioritization amnesty” for roughly 8 million illegals working for Americans companies, and a formal amnesty for at least 1.8 million younger illegals — in exchange for creating a fund of $25 billion for wall construction. However, that fund was surrounded by bureaucratic and legal barriers, and would not have fixed any of the legal loopholes used by migrants to walk through the wall. 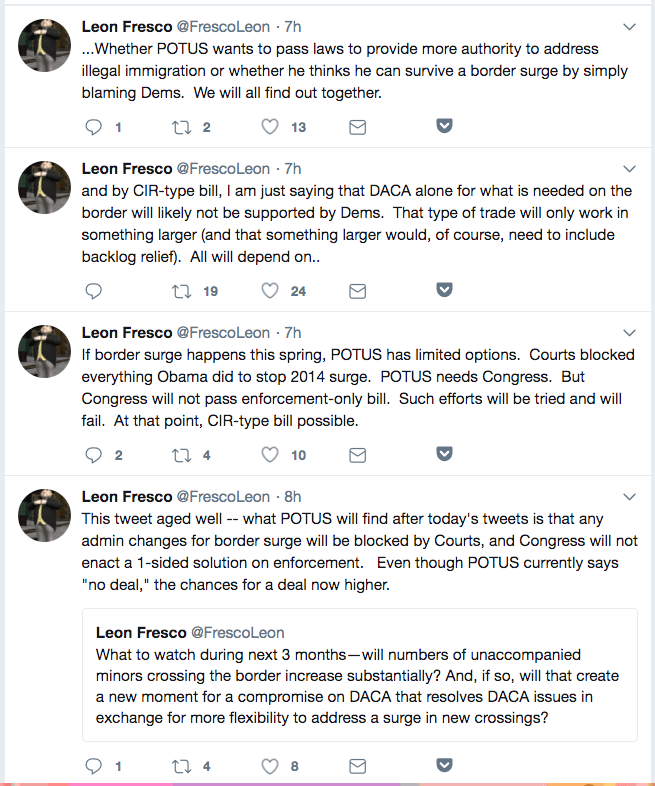