The expected offer of 15,000 visas “is very late, and it is not enough,” said Jack Brooks, owner of a seafood company, J.M. Clayton Company, in Cambridge, Md. Maryland’s crab industry has already gotten 300 of 500 H-2B workers it sought, but the absence of the 200 workers has generated an emotional editorial by the Baltimore Sun.

The 15,000 extra workers will be added to the annual inflow of 66,000 H-2B visa workers, but few of the extra visas will go to the seasonal seafood industries in Maryland, Texas, and Alaska, Brooks told Breitbart News. The extra visas likely will be distributed via lottery, so the more numerous landscaping and resort companies are likely to win the largest shares of the cheaper workers, said Brooks, who has already received a set of H-2B visas for work this year.

The worker giveaway to business is bad news for Republican politicians because it reduces the pressure on business to deliver wage increase to voters before the next election, said Mark Krikorian, director of the Center for Immigration Studies.

“The President can not only accelerate the bidding war for blue-collar workers by making it clear there will not be any increase [in guest workers], but also force businesses who need the labor to start thinking outside the box,” he said.

GOP leaders used the 2018 omnibus bill to set up President Donald Trump and his deputies for the H-2B concession, which contradicts Trump’s 2016 campaign theme and his inauguration-day promise of “Buy American, Hire American.” The extra visas also contradict Chief of Staff John Kelly’s promise of a one-time increase in 2017.

The GOP’s business-first legislators dodged the politically unpopular decision to expand H-2B program above 66,000. Instead, House Speaker Paul Ryan and other business-first Republicans inserted a clause in the 2018 omnibus which allows the departments of homeland security and labor to double the number of H-2B workers to roughly 130,000.

This permission effectively invited companies to lobby their home-state legislators to threaten the agencies’ funding and programs unless the extra visas are approved.

That process was displayed April 26, when the top GOP and Democratic members of the House committee which oversees DHS operations pressured Nielsen to approve extra visas for favored companies in their districts. She responded:

As you know, the law requires us to work with the Department of Labor. We’ve done that. We’ve met with and I talked to a variety of members of Congress who share your concerns. They have very specific companies within their district who are threatened to go out of business if they don’t receive additional visas. So we are very aware. We have finalized our recommendation. It is working its way through the process but we hope that we will be able to issue additional visas next month.

Trump has indicated he would approve the extra H-2B visas, telling a Michigan campaign rally on April 28 that:

The crowd was cool to Trump’s promise of more guest-workers.

Many polls show the public opposes guest-workers as a threat to their salaries and jobs. An August 2017 poll reported that 68 percent of Americans oppose companies’ use of white-collar H-1Bs visas to outsource U.S.-based jobs that could be held by American graduates. More than 1 million foreign college-graduates now hold visa jobs in the United States.

Most of the blue-collar H-2B visas and workers are snapped up by the huge number of competing landscape, resort and forestry companies, regardless of their ability to hire local Americans for the job. The landscapers “are asking for the most,” said Brooks. 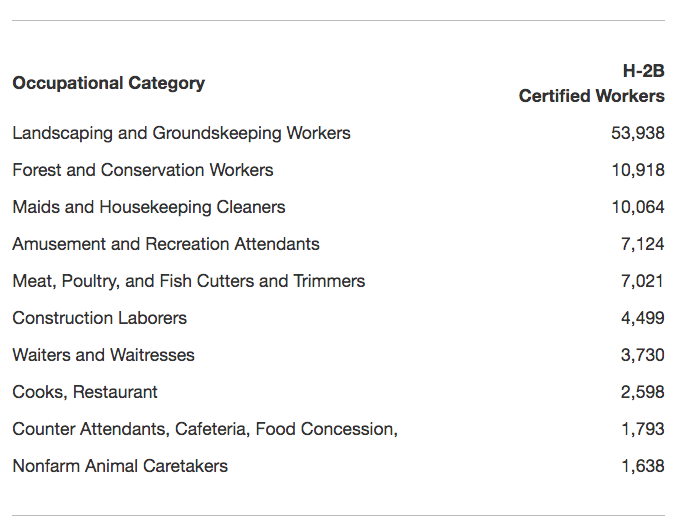 The landscaping and resort companies strongly oppose any prioritization in the allocation of visas, which would likely deliver visas first to the popular seafood industry. Prioritization would require the landscaping companies to justify their own demands to hire foreign workers for jobs in urban districts.

Companies want H-2B visas because the foreign workers are cheaper than hiring Americans away from other jobs. The cheaper seasonal labor also means that employers can pay lower wages to supervisory workers and to year-round workers.

But the companies also need H-2Bs to avoid a marketplace disadvantage because the government will give H-2Bs to rival companies. This dynamic forces companies to compete for the foreign workers instead of painfully changing their businesses practices to match the cost of hiring Americans for seasonal work. This process means that many companies that use H-2B become dependent on the program — and claim they will go out of business unless they keep getting H-2B workers.

“There is no reason to have a visa program that puts American businesses out of business,” Nielsen told the House panel.

In Maryland, the crab-picking process has not changed much for 130 years, according to the 2018 issue of Chesapeake Quarterly:

Dozens of them, mostly young, Hispanic women, crowd around the cafeteria-style tables lining the picking floor at Maryland’s J.M. Clayton Company in Cambridge. This morning, they’re working their way through overflowing mounds of cooked crabs. With curving strokes, the women slice off the crabs’ legs, then backs, finally plucking out two, glistening pieces of lump meat from the now-open body cavities. For the best pickers, this gutting takes mere seconds …

… “Here’s where we pick crabs as we’ve done for 100 years — one at a time, with a knife,” [Jack Brooks] announces. Brooks, who runs J.M. Clayton with his two brothers, Bill and Joe, and his son Clay, admits that his company is a mix of new and old. Its picking line still looks much like it did when his own great-grandfather, the original J.M. Clayton, opened his first seafood processing plant in 1890.

“Pickers are paid by the pound of meat they produce, and the most productive ones make up to $500 a week,” the Baltimore Sun reported. The article noted that crab-picking companies already have 300 of the 500 visas they requested.

“If we could hire locally, we would be hiring locally,” Robert Brown, president of the Maryland Watermen’s Association, told Breitbart News.

However, Chile, China and other countries are combining cheap labor with automation to sell cheap fresh and frozen crabmeat to U.S. consumers. This growing threat of imports is pushing some high-cost fishing centers towards the difficult task of developing robots that can pick crab. 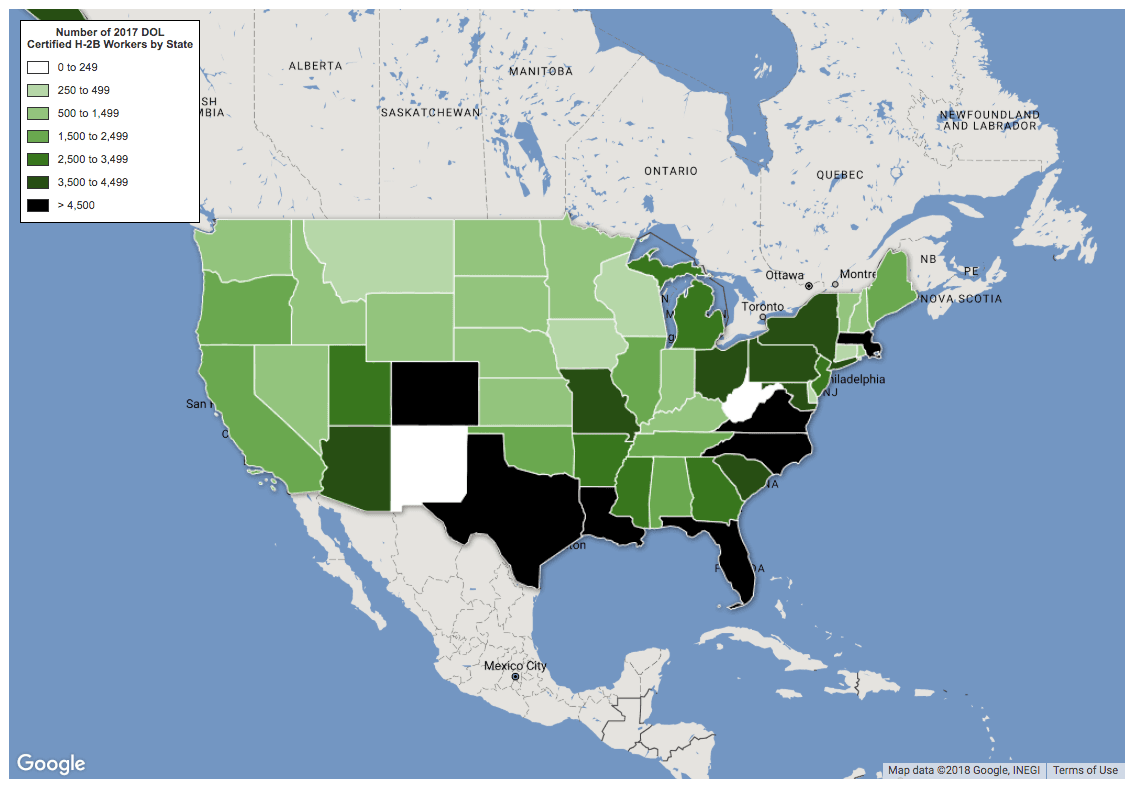 Beyond the seafood sector, many H-2B workers are paid more than $10 an hour — but that wage is much lower than what the manual-labor companies must pay to attract blue-collar Americans away from other employers who offer easier office-style work inside buildings.

The H-2B visa is also backed by industries which want their own supplies of guest-workers. For example, Todd Schulte, who runs FWD.us, a Washington lobbying group for Silicon Valley investors, showed his support for the H-2B program by retweeting a May 3 tweet from an allied pro-migration lobbyist:

Schulte’s main focus is protecting and expanding the huge supply of H-1B, L-1, and other white-collar visas. These visas allow more than one million foreign graduates to live in the United States and to work white-collar jobs, so forcing down wages for U.S. graduates. Business groups are trying to block Trump’sdeputies from launching a pro-American reform of the H-1B program.

Federal law only allows agency officials to distribute H-2B visas via a lottery when companies’ requests exceed the number of visas. Officials are not allowed to distribute the visas by need according to the companies which pay the most or have the best business case for foreign workers. “A lottery chooses which companies live and which companies die,” said Brooks.

The H-2B increase is being opposed by some GOP leaders, including Sen. Chuck Grassley, the chairman of the judiciary committee. An April 25 letter to Nielsen and labor secretary Alex Acosta urged them to deny any increase.

But Grassley’s carefully argued letter also urged them to distribute any extra visas only to companies that can show “irreparable harm” if they do not get the visas, and also to conduct agency checks to verify the “irreparable harm” claim.

In 2017, Kelly’s “irreparable harm” standard limited the extra distribution to 12,294 visas, partly because of Grassley’s 2017 pushback.

Grassley also urged Nielsen and Acosta to provide the extra visas only to the companies which use the federal E-verify system to reject job-seeking illegal immigrants. Grassley ended the letter by writing:

I am confident that you will act consistent with the President’s desire to promote and protect American workers, and will impose much needed integrity measures if the statutory cap is increased. The American people expect as much.