Immigration is now the top political issue in the nation, exceeding concerns about the state of government, according to Gallup.

The 22% of Americans in July who say immigration is the top problem is up from 14% in June and is the highest percentage naming that issue in Gallup’s history of asking the “most important problem” question. The previous high had been 19%.

Just 19 percent of Americans say “government” is the most important problem, said Gallup. 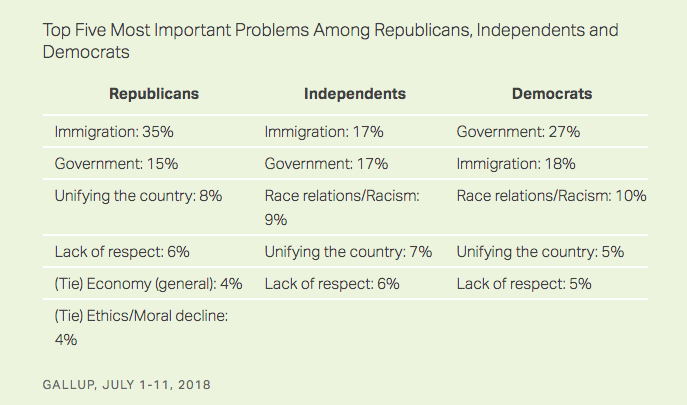 The good economy has minimized voters’ routine concerns about the “economy in general” to just 4 percent.

The poll was taken amid much media coverage of the Democrats’ “Abolish ICE!” and “family unification” campaigns to block President Donald Trump’s zero-tolerance policy for family migrants.

A July 5 to 8 poll by YouGov for HuffPost revealed some details about what the record public concern about immigration implies for voters’ preferences.

The YouGov and Gallup data show one side of the public’s long-standing ambivalence over immigration policy. Most voters prefer less immigration and stricter policies, but also want to show sympathy for migrants, would-be migrants, and even illegal migrants.

This ambivalence helps the various pro-migration groups — business interests, progressives, and Democrats — to distract and divide the swing-voting public from demanding politicians deliver the reduced immigration that they prefer. For example, business groups and Democrats tout polls which prod Americans to declare support for migrants or the claim that the United States is a “Nation of Immigrants.”

However, the public’s ambivalence may be trumped in November if President Donald Trump can make the 2018 election about immigration, jobs, and wages.

“If the general immigration focus continues through the fall, GOP candidates may be able to fire up the enthusiasm of the part of their base highly concerned about immigration and that in turn favors the Republican approach to this issue,” said Gallup’s editor, Frank Newport. “It’s likely that it will remain an important campaign theme no matter what events occur between now and Election Day in November.”