The legislator responsible for keeping the GOP’s House majority in November says companies should be allowed to hire an unlimited number of foreign university-graduates in place of Americans.

I think we should bring in people in the high-tech fields. I actually also believe that when [foreign students] graduate from one of the [university] schools in my district … we should staple a work visa to their diploma.

The number of foreigners who want to migrate to the United States is far above 100 million. In a 2012 study, Gallup reported the number at 150 million, which is one foreigner for every two Americans.

Stivers and his interviewer, establishment journalist John Harwood, both recognized that Americans’ wages rise whenever a high-productivity economy ensures a shortage of young Americans or immigrants for open jobs. But both Stivers and Harwood also showed they want more foreign workers to lessen the growing pressure on companies to pay higher wages to people outside Washington D.C. or New York:

Stivers: The American people have been so long without a raise, since 2008. It’s probably a long time coming, but it’s on the way, and you can see it already in the labor shortages that are out there.

Harwood: You’re right, we do have a labor shortage. Doesn’t that make it a bad idea to cut legal immigration, which the president and some in the Congress want to do?

Stiver’s statement came out shortly before President Donald Trump used a White House awards ceremony to show he wants immigration to be a centerpiece of the 2018 midterm elections:

Blue wave means crime. It means open borders. Not good. We need new laws. We need border laws, we need immigration laws — we need them fast, we’re going to get them. Hopefully the midterms will help toward that end.

Trump’s plan reflects his 2016 success in winning support from a surprise wave of blue-collar voters who recognize they are usually ignored by hostile D.C. elites and investors. Without Trump’s victory, GOP leaders likely would have backed the Democrats’ demands for a huge cheap-labor amnesty.

Since his inauguration, Trump has pushed on many fronts to raise wages by curbing illegal migration and legal immigration. However, many of his efforts — but not all — have been blocked by business-first Republicans and by immigration-first Democrats whose base is urging “Abolish ICE!” in the 2018 campaign.

Trump wants the blue-collar voters to turn out again in the midterms, but Stivers is trying to raise more donations from the GOP’s usual business backers.

Stivers: In fact, I don’t think the president wants to cut legal immigration. He’s suggested replacing the lottery with a merit-based system that would bring us people that we need in the high-tech fields.

Harwood: He wants to cut legal immigration in half.

Stivers: I think we should bring in people in the high-tech fields. I actually also believe that when you graduate from one of the schools in my district — I have Ohio University down in Athens, if you keep going down 33, or if you go 33 West, you’ll bump into the Ohio State University — all these foreign students that come here on a student visa, I think we should staple a work visa to their diploma because we’ve educated them here, and then we force them to go home and compete against us, which is a silly economic policy.

Harwood: So you don’t agree with the president on cutting legal immigration?

Stivers: I believe we should help people, that want to come here that have skills, help us grow our economy. I’m for that.

Stivers’ stated support for the “visa stapling” plan of limitless college-grad immigration, however, is muddied by his support for an pro-American bill immigration pushed by Virginia GOP Rep. Bob Goodlatte which was strongly opposed by business groups, including the U.S. Chamber.

Also, Stivers seems to have recognized the unpopularity of this easy immigration plan. He avoided looking at Hardwood for much of the exchange as he agreed with Hardwood’s indignant opposition to any cuts in legal immigration. 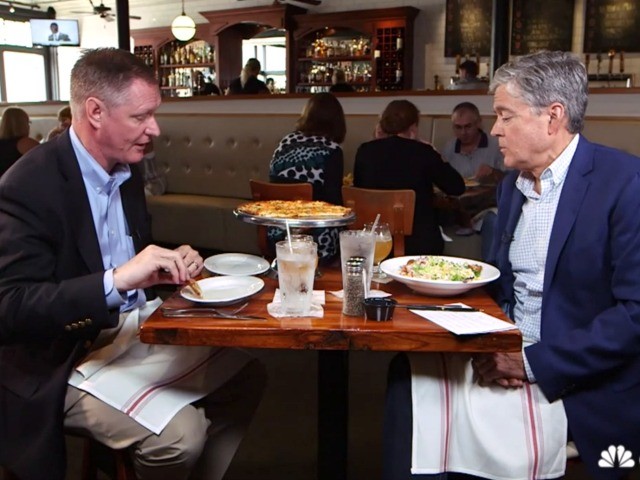 Massive immigration also suits business and investors because immigrants serve them as taxpayer-aided consumers, and as extra renters and home-buyers who drive up housing costs.

Stiver’s “stapling” proposal was included in the 2013 “Gang of Eight” amnesty bill, which was blocked by GOP voters. But it is still  being pushed by major CEOs, their lobbyists, and their globalist spokesmen from the Cato Institute who urge that an unlimited number of “Employer-Based” green-cards be awarded to foreign workers::

The *best* solution for the EB green card backlog isn't getting rid of the *per country* limits. It's eliminating the *worldwide* limits for EB altogether. Absurd that the US is preventing businesses from hiring talented foreigners based on discredited protectionist economics.

The cheap-labor policy is also backed by multiple GOP Senators, including Sen. Cory Gardner, who is managing the Senate GOP’s 2018 campaign plan.

Also, Kansas GOP Rep. Kevin Yoder is pushing four cheap-labor bills via the pending 2019 homeland-defense appropriations bill. The beneficiaries would include migrants who say they fear criminal gangs, the low-tech dairy industry, and landscaping companies seeking cheap seasonal labor. Yoder’s bill also includes his H.R. 392 plan to fast-track green cards for many of the 1.5 million low-wage college-graduate outsourcing-workers who have  H-1B or L-1 visas to work in the United States.

Stivers is a member of the House Committee on Rules which has the power to strip Yoder’s cheap-labor proposals from the 2019 bill.

GOP Rep. Kevin Yoder hid plan to revive Obama's catch-and-release policy from the WH until the day of the July 25 vote. He rejected a telephone plea from surprised AG Jeff Sessions during the markup. Vote came a day after Yoder flew with Trump to Kansas. https://t.co/OegbiNadCj

Stivers’ 15th district is just to the South and West of Columbus. The district is solidly Republican, and whites are roughly 90 percent of the population. Ohio employers are importing foreigners to take jobs sought by American youths via the H-1B, L-1, OPT and other visa-workers programs. For example, Stivers cited Ohio State University which imports almost 200 foreign college-graduates to take prestigious college jobs each year and Ohio University in Athens which is importing 50 foreign c0llege graduates for good jobs in 2018. In 2017, Ohio employers asked for visas to bring in 4,563 new visa-workers and asked to extend visas for 2,714 resident H-1B visa-workers who hold jobs in Ohio.

Harwood’s opposition to Trump’s cuts in legal immigration reflects the interest of the elite establishment in Washington D.C., which gains power and prestige when a bigger economy delivers more revenue to Washington — regardless of flat wage levels — plus more power over Americans’ lives and culture. Immigration also boosts diversity, which helps the establishment rule over a divided citizenry.

In contrast, American employees gain when a shortage of workers forces employers to compete for their time by offering higher wages. The beneficiaries include African-American bakers in Chicago, Latino restaurant workers in Monterey, Calif., disabled people in Missouri, high schoolers,  resort workers in Hilton Head, construction workers, Superbowl workers, the garment industry, and workers at small businesses, and even Warren Buffett’s railroad workers.