Every foreigner who graduates from American universities should be given green cards so they can compete for Americans’ white-collar jobs, according to the chairman of JPMorgan Chase & Co. bank.

Chairman Jamie Dimon’s call for more white-collar skilled immigration comes as U.S. companies rush to use the government’s offer of 85,000 H-1B visas which allow foreign college graduates to work in the U.S. for at least three years. When the H-1B is combined with various other visa-worker programs, more than 1 million college-grad guest workers are already holding U.S. jobs — and cutting salaries for American graduates.

“Those who get an advanced degree in the United States should receive a green card along with their diploma,” Dimon said in his annual letter to investors. “We need these skilled individuals in America.”

“Forty percent of foreign students who receive advanced degrees in science, technology and math (300,000 students annually) have no legal way of staying here, although many would choose to do so,” he said in the April 5 letter. “Most students from countries outside the United States pay full freight to attend our universities but many are forced to take the training back home.”

Dimon is an investor, not an employee, so he makes more money by expanding the size of the economy and growing values on Wall Street, almost regardless of employees’ per-capita wages and salaries.

Democrat leader on Wall St asks CEOs to work with unions to raise wages, so preserving "workers’ confidence in the economic system." But Rubin opposes immigration reform to raise wages via a tight labor market. That's bad for Wall Street (and the party). https://t.co/mHz9ZzVoSG

The extra annual supply of at least 300,000 professionals would have a huge impact on the salaries paid to the 800,000 young Americans who graduate each year from universities with degrees in medicine or business, science, computers or math, architecture or engineering.

Dimon caveated his call for cheaper labor by focusing on people with “advanced degrees in science, technology and math.”

But that caveat means little for American graduates because most skilled degrees include at least one of these subjects, such as statistics in a business degree and medical biology in medical degrees. The federal government already lists a very wide variety of white-collar and skilled blue-collar jobs which can be won by foreign college graduate via the “Optional Practical Training” program. The list includes:

Dimon’s call for more and cheaper white-collar labor is echoed by other business groups, including FWD.us, a lobby for information-technology investors. 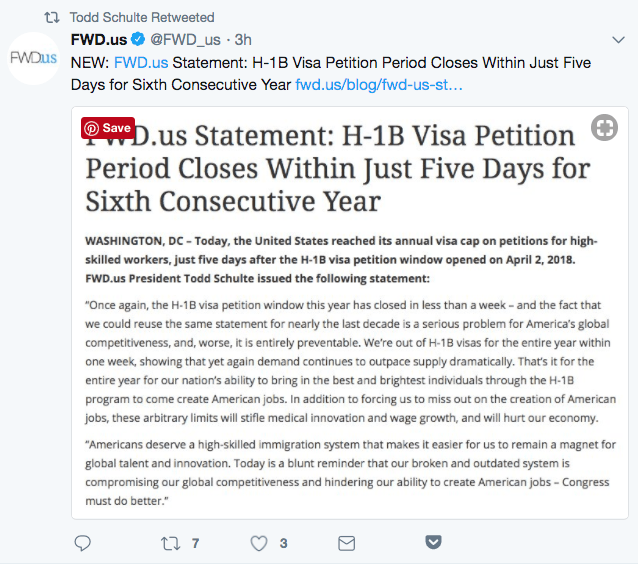 In 2013, the Senate’s “Gang of Eight” immigration-and-amnesty bill included a section allowing universities to get green cards for all of their foreign customers. If the measure had passed, the white-collar labor market would have been flooded with a potentially unlimited supply of foreign college-grad seeking to work and living in the United States. That oversupply would have cut salaries for millions of young Americans graduates who need to pay their college debts, get married, buy houses and support children.

But it was opposition from voters — amid near-universal support in the established media — which killed the cheap white-collar labor provision and the amnesty bill. That opposition was recognized by New York real-estate investor Donald Trump, who used it to win the White House in 2016.

University groups strongly support the proposal to give their customers the hugely valuable bonus of green cards and citizenship. If made law, it would effectively allow academics and administrators — and the owners of private universities — to pocket the proceeds from selling the hugely valuable prize of Americans’ citizenship.