SANTA MONICA, California — Dilbert cartoonist Scott Adams looks thoughtful in in the lobby of a beachfront hotel on a sunny Thursday afternoon as he tells me that the phrase “jobs not mobs,” which he suggested on Twitter six days before, would be catchy — though he adds that Republicans had not yet used it.

It is a measure of Adams’ astonishing influence on popular and political culture, as he has emerged from the world of humor, publishing, and business advice in the past three years to become one of the most insightful political commentators on the planet.

Adams is in Southern California to promote the paperback version of his New York Times bestselling book, Win Bigly: Persuasion in a World Where Facts Don’t Matter. (Read Breitbart News’ review here.) The softcover will be launched on October 30 and is already available for pre-order at Amazon.com. 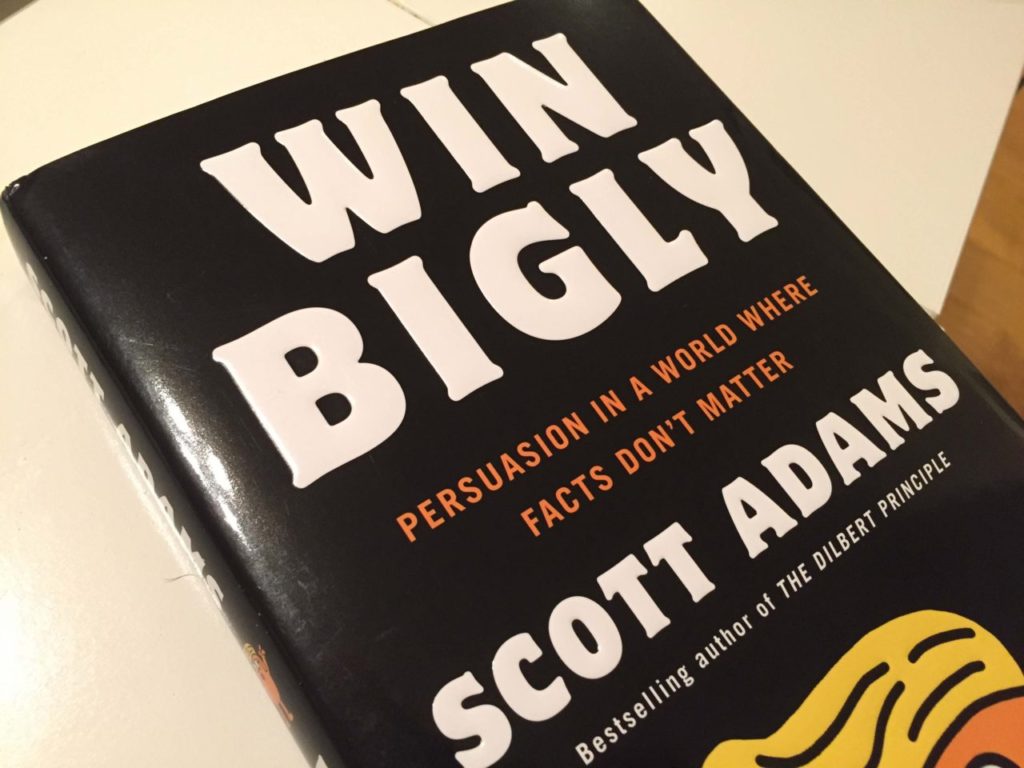 Win Bigly is not just a review of the 2016 presidential election, but an argument for a new way of looking at the world, through the “persuasion” filter.

Adams predicted in August 2015 that Donald Trump would win the Republican nomination for president, based on his analysis of Trump’s persuasion skills. He also suggested that Trump had a chance of defeating Hillary Clinton.

At the time, few others agreed, but Adams was correct — and has made several other successful predictions since. His Twitter feed and his morning Periscopes have become essential reading and viewing — and are evidently followed closely by the White House.

He told Breitbart News it is too difficult to predict which party will win the November midterm elections, because there are too many local variations in state-by-state and district-by-district battles, “too many variables bigger than persuasion.”

But he predicts that we will see “the greatest turnout by Republicans, maybe ever.”

My hypothesis is that humans are primed by whatever they’ve already seen. So if they’ve seen a pattern, they’ve already fallen into it. And one of the patterns Republicans enjoyed in 2016 was having the other side be surprised. And they really enjoyed it — I’m talking about the kind of joy you can talk about over the course of your lifetime. And the Republican personality — I realize this is a gross generalization — is that it’s not always about the talk, it’s about the showing up. Republicans are going to show up. And they’re driven by all the things people are talking about, but you cannot underestimate the fun, either. I’ll tell you this: if the Republicans pull out the House [win] — I’m still thinking it’s unlikely, only because other people say so and I don’t know any different — it’s because there’s a shitload of Republicans who are saying to themselves, “They’re gonna be surprised.” It’s predictable from the fact that they have felt that pattern and that payoff before. They see the same thing happening again, and are reminded of it.

Asked whether Democrats or Republicans have the more persuasive message heading into the final two weeks of the midterm elections, Adams notes that Democrats’ claim that Republicans want to take away people’s health care was undone with a single tweet earlier Thursday, in which the president promised to sort out any Republicans who dared propose denying coverage for pre-existing conditions — a move Adams called “magically good.”

All Republicans support people with pre-existing conditions, and if they don’t, they will after I speak to them. I am in total support. Also, Democrats will destroy your Medicare, and I will keep it healthy and well!

Republicans, he suggests, have a stronger message, in pointing to the “mobs” that the left have mobilized in protest around the country over the confirmation of Supreme Court Justice Brett Kavanaugh and other issues. Fear is the most powerful persuasive force, he argues. That — and the sheer fun of winning bigly — could drive GOP voters to the polls.

Adams is a fan of the president, but is not reluctant to be critical, where he disagrees. He tells me that he  is “disappointed” that the president has not achieved more on health care — though he notes that Trump still could, given more time. Nothing seems impossible anymore.

One reason health care has become a salient issue for Democrats in the closing weeks, Adams argues, is simply that Trump has already succeeded in so many other ways.

He adds — in case Democrats are paying attention: “If I were going to recommend an argument against Trump in 2020, it would be that he did a good job on the things he’s good at — but that we don’t yet have health care, good race relations, or immigration reform.”

Trump’s fight against the opioid epidemic recently hit home — hard. Three weeks ago, Adams lost his 18-year-old stepson to what he believes is an overdose of fentanyl. He now says that the U.S. must step up the fight against Chinese manufacturers who create and ship the deadly drug to Americans — encouraging the Chinese government to apply the death penalty for “mass murder.”

He tells me — from painful, personal observation — that the addiction is a “zombie apocalypse,” since, for victims, “the drug is their brain … the person is no longer there.” He suggests the only answer may be to create isolated “rehab cities” in which the supply of opioids is completely cut off.

In the meantime, he wants to “raise awareness,” and suggests the opioid crisis is one for which society should “try as many different approaches as we can” until something works — testing small, in cities or states, before scaling up to the nation as a whole.

If anyone can help solve the crisis, it is Adams, who clearly has the ear of people in high places.

He is already working on his next book — one he hopes will “re-wire America,” helping people program themselves to succeed.