“I just want to make sure that our party doesn’t become a party of an individual,” she told the Wall Street Journal in an article titled “Lisa Murkowski Bets on Infrastructure to Keep Alaska Senate Seat, Deny Trump Revenge.”

Murkowski’s careful line of attack resembles the establishment media’s public relations campaign to frame Trump as a cult leader. Such claims, amplified by congressional Democrats, are unfounded. But that has not prevented the Republican senator from echoing her Democrat colleagues in Washington, DC.

“Alaska voted for Donald Trump by double digits twice because his policies were the best for Alaska. He unleashed the energy industries to create jobs and Alaska helped America achieve energy independence. But Joe Biden has squandered all of that and Lisa Murkowski has enabled him. Lisa Murkowski cares more about pleasing D.C. insiders than she cares about her own constituents,” he said.

Murkowski, who voted to impeach Trump in 2021, has remained on the war path against Trump during her reelection campaign against Trump-endorsed Kelly Tshibaka. Polling shows Murkowski and Tshibaka are on equal footing about 50 days from the general election.

Similar rhetoric was deployed by Murkowski in September when she claimed January 6 was an “insurrection.” Speaking about how the January 6 protesters should receive just consequences, Murkowski failed to raise concerns that rioters have been held in 23-hour-a-day isolation before their trials begin. 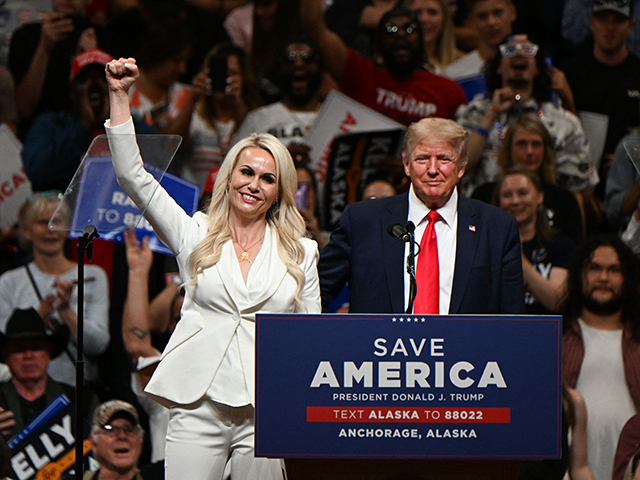 At least one January 6 defendant has called the maximum-security conditions “mental torture,” a condition that starkly contrasts Democrat policies of expelling criminals, including child rapists, from prison on parole.

The 21-year incumbent has additionally suggested America’s justice system has been politicized by conservative Republicans, not weaponized against them. “Everything is becoming politicized,” she claimed.

Murkowski used the example of the FBI’s raid on Trump’s private residence as an instance Republicans have politicized “everything.”

Murkowski has not just rhetorically positioned herself with Democrats during the campaign to defeat Tshibaka. She has voted with Senate Democrats nine times. Some of those votes fueled President Joe Biden’s soaring inflation, experts say.

When questioned why she voted for Biden’s $1.2 trillion “infrastructure” bill that fueled inflation, Murkowski said she claimed the spending would not contribute to inflation.

Voting for Biden’s agenda is just the beginning. The pro-impeachment senator has also vowed to help Biden if she wins reelection.

“I’m working with them to advance things,” she said on a podcast in September.