SOF – an Exceptional Magazine and Much More

Like most things unapologetically conservative and unapologetically pro-American, Soldier of Fortune magazine has been pilloried for years by the organized Left’s venomously anti-American press and culture. But SOF, founded in 1975 by decorated Special Forces veteran and lifelong adventurer, Lt. Col. Robert K. Brown (USAR – Ret.), stands out as a singular example of American exceptionalism in print media. Would that the rest were half as good.

SOF is more than that too, for unknown to most people, Soldier of Fortune magazine and its staff of intrepid reporters – almost all with special operations backgrounds, some who paid the ultimate price while on assignment – has voluntarily assisted the U.S. military and our allies for decades, with little or no recognition, providing intelligence, training and combat support to freedom fighters throughout the world. They did so much of this in fact, that they could almost be characterized as the first “private contractor,” except they did all their work for free, with expenses being covered by the magazine itself.

Started in 1975, the year of the Vietnam War’s ignoble end, Soldier of Fortune magazine quickly gained a wide following among Vietnam veterans. It was one of the few journals then in print that gave an honest and appreciative assessment of veterans’ wartime sacrifices, with articles written mostly by fellow veterans who knew about war firsthand, up close and personal.

The magazine remains dedicated to our Nation’s military and is avidly read and appreciated by veteran and active duty alike. As editor Brown stated in SOF’s 25 year anniversary issue:

Overnight, SOF offered Vietnam vets the recognition they deserved, a home in a sense, a meeting place for like souls. Like a banner, it acknowledged their sacrifices and continues to do so, loudly and loyally.

Americans fed on network news had little idea what was really happening over there. Many still don’t. Shamefully, the mass media (they are not mainstream) has never come clean about their central role in the systematic deception of the American public that led to America’s first military defeat. America did not lose the Vietnam War on the battlefield, despite military missteps. It was lost due to a conspiracy of deliberate misreporting by American media and the incompetent, feckless and in some cases treasonous, activities of the White House and Democrat-controlled U.S. Congress.

In addition to becoming a voice for Vietnam vets, SOF rapidly gained a reputation for cutting-edge reporting at the front lines of bush wars throughout the world, many of which were and still are ignored by the mass media. For example, since 1982 SOF has reported on the plight of Burma’s Karen people, who have fought a war of liberation against that country’s brutal, Stalinist regime for decades. 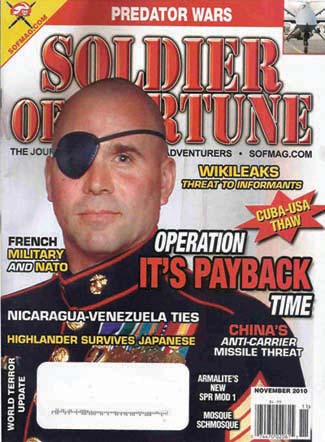 SOF’s reporting on the Karens inspired Sylvester Stallone to make his 4th Rambo movie about the Burmese conflict. As Sly puts it:

I think SOF has proven time and time again that it has its thumb on the pulse of what is really transpiring in the remote, dark parts of the world that the drive-by media tends to overlook.

One of SOF’s correspondents, Lance Motley, was killed by Burmese forces in 1989 while reporting on the conflict. Wounded three times on previous expeditions around the globe for SOF, Lance was as usual, right on the front lines.

Motley personified the archetypical SOF reporter. A West Point graduate and Special Forces officer, Lance quit the Army out of boredom. He then made a solo trip to Afghanistan. He had no backing from anyone, no knowledge of the people, language or culture, but managed to sneak in, find his way to the action, fight with the Mujahideen against the Soviet occupiers, and help compile a list for the U.S. Congress of weapons the Afghans needed – all in six months! This was before anyone had ever heard of Charlie Wilson. Lance’s obituary is a testimonial to the caliber of men who wrote for Soldier of Fortune.

SOF is about the only journal that has reported on Laos and Vietnam’s relentless genocide against its indigenous tribes. The Degar people of Vietnam’s Central Highlands, known collectively as “Montagnards” (mountain people) fought valiantly alongside American Special Forces throughout the Vietnam War, but were shamelessly abandoned when we decided to pull out. The US government forgot about them, but their former enemies didn’t. Since that time, the Degar have been systematically repressed, with many tortured and killed in “reeducation” camps.