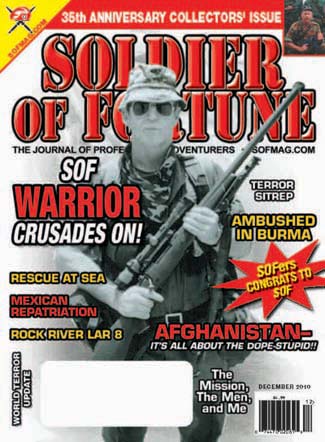 The Laotian Hmong or Miao tribes, who assisted the US during its CIA-operated secret war in Laos, have suffered similarly. For the last thirty five years, the Laotian communist government has engaged in a bush war with the goal of exterminating remaining Hmong, killing as many as 100,000, including the use of chemical weapons. Remaining Hmong have retreated to remote mountainous areas, where they survive in primitive conditions, living off the land.

To add insult to injury, the Bureau of Alcohol, Tobacco, Firearms and Explosives, (ATF) saw an opportunity to lure Hmong expatriate leader, then 77 year-old Major General Vang Pao, into a sting operation. Vang led Laotian forces for the CIA during the secret war and has spent his life devoted to the Hmong cause. He remains a widely respected leader, both among the Hmong expatriate community and in Laos. Those remaining in Laos would likely have perished long ago were it not for the external assistance provided to them through Vang’s efforts.

ATF agents convinced Vang to become involved in a plot to overthrow the communist Laotian government. Assured that this was a CIA-backed operation, he agreed. He and his compatriots were later arrested and charged with violating the Neutrality Act. Fortunately Vang’s case was dismissed in 2009. The fate of his co-defendants has not yet been determined. See a very good video about this case and the plight of the Hmong here.

The reality of Southeast Asia’s Communists’ brutal genocide against the Hmong and Degar people stands in stark contrast to their wartime propaganda about “liberating the oppressed.” But for SOF, we wouldn’t know about it.

Meanwhile, American communists like Bill Ayers and Tom Hayden, who actively, blatantly supported communist North Vietnam during the war, have nothing to say about the miserable aftermath they helped bring about. Many of these same Leftists, by the way, were the foremost organizers of Progressives for Obama – just one great big cesspool.

SOF’s Brown also became personally and professionally involved in the search for living POW/MIAs after the war, dumping $350,000 into the effort. This unfortunate chapter in our Vietnam experience had its share of charlatans, who capitalized on the hopes of POW/MIA families and concerned veterans like Brown. SOF, however, wasted no time in challenging those who appeared to be frauds, even decorated veterans like Bo Gritz.

SOF was also one of the few, if not the only, publication that reported on the situation in Afghanistan during the years between the Soviet withdrawal and the rise of the Taliban. By reading SOF, one would come to know the various factions within Afghanistan and especially, dispositions of the large, Soviet-backed force organized to continue the war on the Soviets’ behalf after they left. This force was commanded by Abdul Rashid Dostum, a notorious, brutal communist warlord, who has figured prominently in the post-9-11 Northern Alliance.

During the 1980s, SOF staff took many trips to Afghanistan. One trip yielded two 5.45 mm cartridges for the new Russian AK-74. Neither the weapon nor the ammunition had previously been seen by Western intelligence. This new ammunition was believed to be the culprit in massive wounds reportedly being suffered by Mujahideen in their battles with the Soviets. On a subsequent trip, Col. Brown smuggled out another 5,000 rounds of ammunition and a sample of the AK-74 weapon itself, turning it over to the U.S. military attaché in Islamabad.

The byword is professionalism. For instance, a 1983 report describing the work of a 12-man SOF team in El Salvador covers 47 pages. It includes weapons maintenance, sound discipline on ambush, field medicine and sanitation.

On September 30th 1995, the El Salvadorian government awarded Brown their Combat Star medal. The citation reads: “In Recognition of Your Combat Support Services With Units of the Armed Forces of El Salvador, 1980 to 1992.”

SOF provided similar training to Nicaragua’s Contras during the Nicaraguan civil war. While they were at it, Brown grounded the Sandinistas’ entire fleet of Soviet Hind attack helicopters by posting the advertisement shown below. I interviewed Unintended Consequences author and firearms expert John Ross about it by phone, who confirmed the following account:

In the 1980s, Danny Ortega’s oppressive Communist regime in Nicaragua received a fleet of Russian Hind helicopters… to put down the Contras. When the Contras started to take heavy losses from these gunships, Bob Brown single-handedly grounded the entire fleet in less than 72 hours. How? By printing a full-page ad in his own magazine offering a million dollar reward to anyone who would bring us one of these choppers. The Russians knew damn well that every Cuban pilot would jump at the chance to fly into nearby El Salvador and get a million bucks and a Miami liquor license for his efforts. Bob’s actions helped cause Ortega’s fall, and stopped the spread of Communism in Central America dead in its tracks.

Ross’s account is exaggerated but not entirely off the mark. An ABC reporter, Peter Collins, who had contacts in the Nicaraguan military, confirmed to Brown that they had, in fact, grounded their fleet of Hinds for three weeks because it took that much time to bring in trustworthy replacement pilots.

Brown had placed the ad hoping it would have just such an effect. As explained to me for this article, the idea was modeled after a similar PSYOPS plan conducted during the Korean War to ground MIG-15s in advance of an important bombing campaign. Brown had no interest in actually securing a helicopter.