The following ranking and revenue data was provided by Forbes Israel: 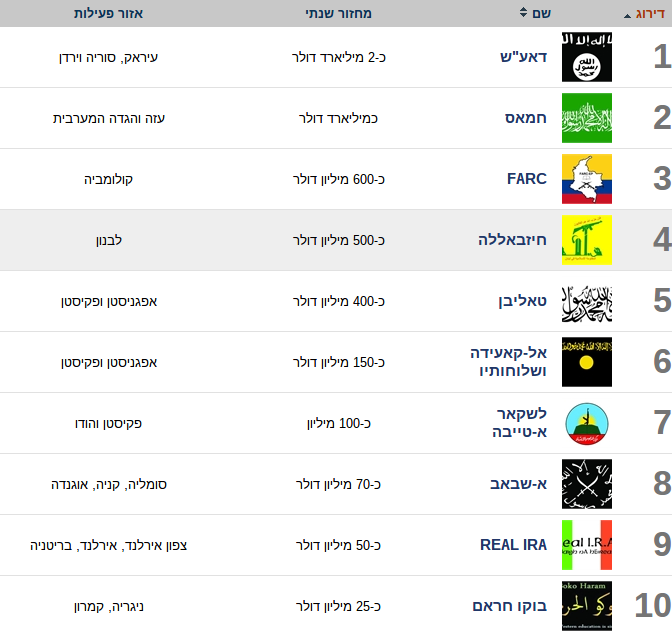 The chart shows that the Islamic State far surpasses rival Sunni terror group Al Qaeda in fundraising capabilities. Estimates have stated that the Islamic State receives between $1 and $3 million per day from oil production alone. Their other sources of revenue reportedly come from wealthy donors and well-connected rulers in Gulf States such as Qatar, UAE, and Saudi Arabia.

Gaza-based terror group Hamas richens its coffers primarily through intercepting what is supposed to be designated as international humanitarian aid monies into Gaza. Other times, Hamas receives direct donations under the guise of campaigns such as “Relief of the Palestinian People in Gaza.” Because Hamas has iron-fisted control over Gaza, the jihadi group often pressures aid groups to cough up their donor money. Other times, willing enablers in the area, such as the UN Palestinian refugee group UNRWA, have been more than willing to share funds, including ideological and physical resources with the jihadi group.

Rounding out the top three is radical left-wing Colombia-based terror group FARC, a militant organization grounded in Marxist-Leninist ideologies. Some estimates have stated that FARC makes as much as $3.5 billion dollars per year engaging in kidnapping and extortion, illegal gold mining, and black market drug trade.

Eight of the ten top terror groups on the list are Islamic jihadist outfits, while the remaining two (FARC and Real IRA) are grounded in left-wing Marxist-Leninist ideology.