In the wake of the Senate Intelligence Committee’s CIA torture memo release, former Congressman Ron Paul (R-TX) has suggested that America should get rid of its premier intelligence agencies and bring all of our troops back home.

Paul’s pacifistic world-view is articulated in his Voices of Liberty op-ed, where he states, “all of our wars–we would come home from the 150 countries where we have troops stationed,” in recommending a government shutdown that defunds overseas operations.

In Paul’s view, America should not be a world leader, but instead only focus on internal matters. The threats posed by actors such as ISIS and Al Qaeda exist simply due to grievances generated from America’s activities overseas, according to Dr. Paul. He has in the past blamed the 9/11 attacks on blowback from the United States presence overseas, and not the terrorists’ jihadist ideology.

In advocating for a government shutdown, the former Congressman said, “abolish the NSA, the TSA, the CIA and all spying on American citizens.”

Paul’s comments come as the Democrat-led Senate intelligence committee released a report on Tuesday that blames the CIA for wrongdoing in its handling of terrorist detainees. Republican Senators Marco Rubio and Jim Risch said the report was not “serious and constructive” and “could endanger the lives of Americans overseas.”

Additionally, Paul responded to the coming CIA torture report in August by going on Kremlin-run Russia Today and bashing America’s intelligence services and overall government structure. Paul said of the United States, “The American government is like almost every government that has existed throughout history. They do not want to tell the people the truth, its always deceptions and deceiving the people and lying to the people..” 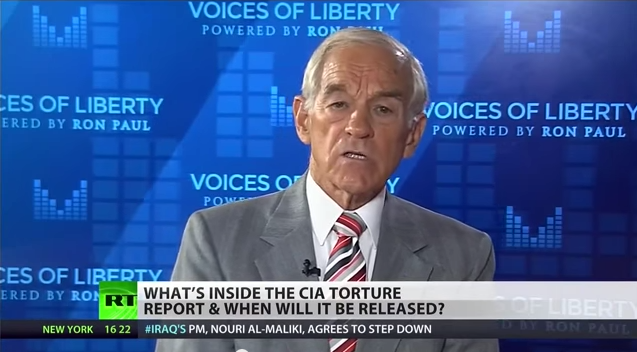 In July, Paul wrote an Op-ed titled, “End Torture, Shut Down the CIA.” Paul stated, “Far from keeping us safer, CIA covert actions across the globe have led to destruction of countries and societies and unprecedented resentment toward the United States. For our own safety, end the CIA!”