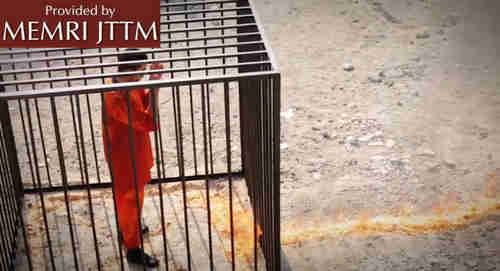 Muath al-Kaseasbeh, drenched in gasoline, watches as the flames approach his cage to burn him alive, in screen grab from ISIS video. (Memri)

On Tuesday, the Islamic State of Iraq and Syria (IS or ISIS or ISIL) released a 22:34 minute video that portrays Jordan’s pilot Muath al-Kaseasbeh being locked in a cage and burned alive. Jordan is part of the coalition conducting air strikes on ISIS, and al-Kaseasbeh was captured by ISIS several weeks ago.

A number of analysts on Tuesday expressed surprise that ISIS committed this atrocity. Al-Kaseasbeh was a very high-value hostage, a member of a leading tribe in Jordan. His value was second only to the value of a captured American pilot, if one should occur. ISIS could have leveraged al-Kaseasbeh for many things, including millions of dollars in ransom money and the release of scores of terrorists in Jordan’s jails, in exchange for his release. Also, Jordan’s involvement in the American coalition against ISIS was becoming increasingly unpopular in Jordan, and ISIS might have even been able to force Jordan to withdraw from the coalition. In fact, Jordan stopped taking part in the anti-ISIS airstrikes since the pilot was captured.

The analysts I heard point out that every time ISIS posts a video of this sort, the number of recruits joining ISIS surges. Thousands of young men and women from around the world have been traveling to Syria to join the ISIS bloodbath, and this video will bring more. These would-be jihadists are mostly used as cannon fodder in ISIS’s war against other Muslims in Syria and Iraq.

The ISIS strategy has to be seen in the context of the reality that ISIS is facing. As I’ve been describing for weeks, there is a growing Muslim versus Muslim war in the Mideast, North Africa, and South Asia, and ISIS is one of the armies fighting in that war. ISIS’s armies are not fighting Europeans or Israelis; they’re fighting and killing Muslims. For ISIS to succeed, it needs an even bigger army. Negotiating with Jordan for the release of the pilot would have done nothing to increase the size of the ISIS army. Burning him alive in a barbaric fashion as a PR stunt will have that result. MEMRI

During America’s war with Vietnam in the 1960s-70s, whenever the North Vietnamese committed some atrocity, such as burning down a village and slaughtering all the women and children, or committing atrocities against American soldiers, these acts would fuel the American anti-war movement, and bring cheers from the likes of John Kerry and Jane Fonda. America was then in a generational Awakening era, one generation past the end of World War II, when nationalism is typically at a low point. But Jordan today is in a generational Crisis era, and we’ve reported in the past how nationalism is increasing in countries around the world, including the U.S., Europe and China. Anti-war movements gain little traction at such times, so it’s not surprising that those wanting revenge in Jordan are having their way today. VOA and Time

ISIS was embroiled in another hostage drama in recent days, having abducted Japanese journalist Kenji Goto and his friend Haruna Yukawa. ISIS demanded $200 million in ransom for the freedom of the two hostages, even though it was clear that no sum that large would ever be paid. In retrospect, it appears that ISIS had as much intention of freeing the two Japanese as it had to free Jordan’s pilot.

So when ISIS released videos in the last few days showing the beheadings of the two hostages, prime minister Shinzo Abe reacted with outrage, promising “to make the terrorists pay the price.” He added:

No country is completely safe from terrorism. How do we cut the influence of ISIS, and put a stop to extremism? Japan must play its part in achieving this.

Abe’s statement seems straightforward enough, but in fact it appears to mark a watershed in Japan’s military policy. After being defeated in World War II, Japan adopted a constitution that permitted the military to be used only for self-defense. The U.S. has been pressuring Japan for decades to increase its military budget, to take on a greater share of responsibility for its own defense, and to participate more in multilateral, global security operations by committing self-defense forces.

Japan has resisted for decades. It was thought that only a major military confrontation with China or North Korea would cause Japan to reverse its policy. But now, ISIS seems to have accomplished something that the US could not. The beheadings of the two hostages have infuriated the Japanese people and increased nationalism to the extent that they may now support greater military commitments abroad.

Over the weekend, a Japanese diplomat said:

This is 9/11 for Japan. It is time for Japan to stop daydreaming that its good will and noble intentions would be enough to shield it from the dangerous world out there. Americans have faced this harsh reality; the French have faced it, and now we are, too.

This reference to 9/11 is interesting because 9/11 was also cited frequently in past weeks in reference to the Charlie Hebdo terror attacks in Paris. 9/11 has become a symbol in one country after another to describe an event that turns the country around to cause a surge in nationalism and willingness to use the military. (In generational theory, these are called “regeneracy events,” because they regenerate civic unity for the first time since end of the preceding crisis war.) Any country is susceptible to such popular reversals during a generational Crisis era.

What was particularly infuriating to the Japanese people was that ISIS gave as a reason for beheading Goto that Japan was a member of the American-led coalition against ISIS. The reason that this is infuriating is that Japan was NOT a member of the coalition, and could not have been a member because of the country’s constitutional restrictions on the military to defense only. However, Japan did offer $200 million in humanitarian aid to countries fighting ISIS. KForce NightWatch and NY Times