Mark your calendar: coming on May 3, my organization, the American Freedom Defense Initiative, will hold our Muhammad Art Exhibit and Cartoon Contest in the Dallas area to show that we will defend free speech and not give in to violent intimidation. Special offer to Breitbart readers — email muhammadartexpo@gmail.com for your free ticket!

We received over 350 submissions of Muhammad cartoons from all over the world. Now we want to extend our heartfelt thanks to the many hundreds of Breitbart readers who voted for their favorite for our People’s Choice Award when we threw open voting last week. You and voters worldwide overwhelmingly chose this cartoon as the winner: 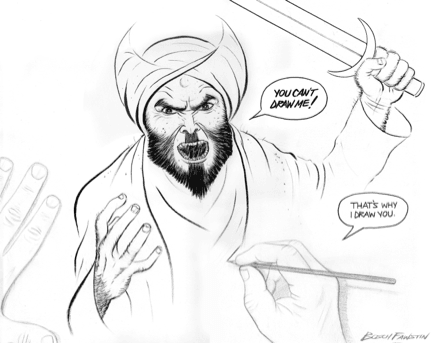 The winning People’s Choice Muhammad cartoon best illustrates the reason why we are having this contest and art exhibit to begin with. We draw Muhammad because we are free. We draw Muhammad because our unalienable rights are enshrined in the first amendment. The freedom of speech is the First Amendment — not the fifth or the eighth or the tenth. The first — and that’s for an important reason: it is the cornerstone of all our other freedoms.

It is fitting that you chose this cartoon, as it is the work of a premier counter-jihad activist, Bosch Fawstin. Here is a description from Bosch’s website:

Cartoonist whose debut graphic novel, TABLE FOR ONE, received the praise of Alex Toth, along with an Eisner Award nomination. My current work is my graphic novel, THE INFIDEL, a story about twin brothers whose Muslim background comes to the forefront of their lives on 9/11. One responds by creating a counter-jihad superhero comic book called PIGMAN, as the other surrenders to Islam. Pigman’s battle against his archenemy SuperJihad is echoed by the escalating conflict between the twins. Chapters One & Two of The Infidel are now available as digital comic books. I appeared on The Daily Show, discussing Pigman. My “Andrew Breitbart: Fighter” drawing appeared on the FOX News late night show, Red Eye, where it was auctioned off. And Michael Savage mentioned my work on his radio program, The Savage Nation.

As winner of the People’s Choice Award, Bosch will receive a $2,500 prize. And at our Muhammad Art Exhibit and Cartoon Contest in the Dallas area on May 3, sponsored by the American Freedom Defense Initiative and Jihad Watch, the cartoon that was chosen as the winner by our panel of judges will also be unveiled – and will be awarded a $10,000 prize. The winning cartoon will be announced at the May 3 cartoon exhibit in Garland, and the winning cartoonist will be awarded a $10,000 prize.

The keynote speaker at our Texas event will be Dutch freedom fighter and Parliamentarian Geert Wilders – one of the very few politicians on the international scene who dares the speak the truth about the jihadist threat. Both of us will also be speaking. The cartoon exhibit will feature images of Islam’s prophet, both historic and contemporary.

The exhibit will be held at the Curtis Culwell Center in Garland, Texas. The Muhammad Art Exhibit and Cartoon Contest was a logical next step following AFDI’s Free Speech Rally in Garland. We hope that this event will give others the courage to stand up as well and show the world that they aren’t going to submit to intimidation. Otherwise, it is no exaggeration to say that all will be lost.

The West has to stop this pathetic cowardice and submission to barbarism. Islamists have to stop imposing repression on the non-Muslim and secular Muslim world. Enough is enough. They’re just cartoons. Are we going to stand idle while psychopaths who would commit murder because of them frighten the free world into giving up the freedom of speech, the cornerstone of a free society?

It’s time to stand up.

Stand with us against violent intimidation: email muhammadartexpo@gmail.com now for your free ticket.

Pamela Geller is the President of the American Freedom Defense Initiative (AFDI), publisher of PamelaGeller.com and author of The Post-American Presidency: The Obama Administration’s War on America and Stop the Islamization of America: A Practical Guide to the Resistance. Follow her on Twitter here. Like her on Facebook here. Robert Spencer is the director of Jihad Watch and author of the New York Times bestsellers The Politically Incorrect Guide to Islam (and the Crusades) and The Truth About Muhammad. His next book, The Complete Infidel’s Guide to ISIS, will be available August 17. Follow him on Twitter here. Like him on Facebook here.