War in Syria turns more and more against al-Assad 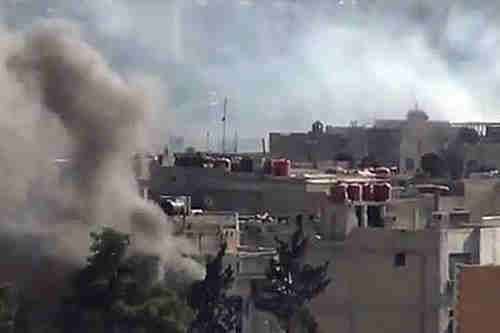 In the intervening month, there have been increasing reports that al-Assad’s army is in serious trouble and, at the same time, his opposition is becoming more powerful.

The Syrian army has suffered enormous casualty rates. Reports indicate that draft-dodging and desertions are up significantly, that the collapse of the Syrian economy has bankrupted the government, and that members of Assad’s inner circle are fighting with one another, to the point where Assad’s political security chief was beaten to death.

At the same time, there has been a major realignment of the forces opposing al-Assad. In the past, they have been a disorganized collection of militias, but now they are becoming a lot more organized. The situation was summarized in an al-Jazeera interview of Fawaz Gerges from the London School of Economics (my transcription):

[The big difference now is] unified command. Fighting under basically one particular leadership. Al-Nusra Front and other radical Islamists like Kata’ib Ahrar al-Sham, are the driver. The Free Syrian Army really plays a minor role.

And the most important element is the pivotal support that Turkey, Saudi Arabia, and Qatar are providing. The first time the three regional powers are providing fundamental support. Not just in terms of arms, not only in terms of money, command and control, leadership, and management of the battlefield plans. This is very serious. While the Syrian army – what – is exhausted, overextended, and basically does not have enough manpower to face up to this new coalition. …

The advent of coming to power of King Salman in Saudi Arabia has brought about a major rapprochement between Saudi Arabia on the one hand and Qatar and Turkey. So, the three states have joined together to deliver a blow to the Assad regime, and they have basically done so. Not only in Idlib and Jisr al-Shegour, a strategic town, bordering on the major government power base.

Gerges refers to Jabhat al-Nusra (al-Nusra Front) as a leading Islamist militia, the official arm of al-Qaeda in Syria, but not the only one. The flood of jihadists that have poured into Syria from countries around the world have benefitted not only the Islamic State (IS or ISIS or ISIL or Daesh), but also al-Nusra Front and other Islamist militias.

The other major factor is that the three major Sunni Muslim countries — Turkey, Saudi Arabia, and Qatar — are now lining up against al-Assad. (Gerges doesn’t mention Egypt.)

Gerges makes it clear that even though al-Assad’s army is in trouble, it is far from defeated. He says that this group of Islamist militias may defeat al-Assad and then take control of Syria’s government, but this kind of outcome might take months or years of additional fighting. Business Insider and New York Times and Jerusalem Post

Analysts were shocked when data released on Wednesday showed that the Gross Domestic Product (GDP) in the first quarter grew sharply less than they had expected — 0.2%, rather than the predicted 1%, after rising 2.2% in the last quarter of last year.

As usual, the mainstream economists called it just a blip, nothing to be concerned about, but if they really believed that then they would not have been shocked. The problem is that this has been going on for years, since the 2007 credit crunch. Every time the GDP goes up a bit, as it did in Q4, mainstream economists pull out their macroeconomic models from the 70s, 80s, and 90s, and announce that the economy is finally on an upsurge, and that the “Great Recession” is finally ending. So the shock is not that they got it wrong this time, but that they got it wrong time after time after time since 2007.

Long-time readers will recall that I used to repeatedly mock and make fun of mainstream economists. Each quarter I would post the consensus forecasts for growth in that quarter, and then the actual growth figures when they came out. It was a major farce.

The reason that the tech bubble occurred in the late 1990s is because that was exactly the time when the risk-averse survivors of the 1929 crash and Great Depression all disappeared (retired or died), leaving behind the younger generations with no personal knowledge of the dangers of debt. Generational theory can explain almost everything that has occurred in the last 15 years, but mainstream economists never think of this because they have a brain malfunction that keeps them from understanding even the simplest and most obvious generational explanation of anything. At any rate, if they want to get their forecasts right, then they have to dig out the macroeconomic models from the 1930s, and throw away the models from the 70s-90s, which are irrelevant today.

According to Friday’s Wall Street Journal, the S&P 500 Price/Earnings index (stock valuations index) on Friday morning (May 1) was astronomically high, just below 21. This is far above the historical average of 14. Furthermore, it was 18 just a year ago, indicating that the stock market bubble is getting so large it’s close to exploding. Generational Dynamics predicts that a panic will occur, and that the P/E ratio will fall to the 5-6 range or lower, which is where it was as recently as 1982, resulting in a Dow Jones Industrial Average of 3000 or lower.

So we have a continuation of their bizarre situation where the economy is getting weaker (or, at least, not getting stronger), which causes the Fed to pursue policies that pour billions of dollars into the banking system, which finds its way into the stock market bubble and into the pockets of the “top 1%.” If you want to know why there are no jobs in Baltimore and elsewhere, this is where you should be looking. Bloomberg

Financial firm analyst told to shut up about over-valued assets

ZeroHedge on Saturday posted an analysis of an economic indicator, the rejection of credit applications. This is a crucial indicator of how the economy is doing, since if businesses are suddenly unable to get credit, then it could lead to a severe recession, just like the credit crunch of 2007.

What I found most interesting about the article was a portion of the comments section. The writer submitted a report to a top manager at a large financial firm, and in response he was essentially told to lie:

On an aside — I had to do a report on a couple asset classes in the States over the past few months. I submitted it to my boss in the States on Wednesday of last week. I laid out essentially and irrefutably why the asset classes are horribly over-valued, most of the barometers used to measure their value are horribly bastardized, and why we should avoid them like the plague.

My boss sent me an email Thursday in the US around noon EST — where he said he did not appreciate me injecting my opinions into the report and I should try again without a biased approach. As an example, he said I should take out the labor force participation rate as it is a biased barometer and should use Federal Unemployment numbers exclusively. He said I should quit comparing the CPI to various food, energy, education and medical care price indexes, as it presents an unfair picture of the USD’s purchasing power of these assets and should focus on the CPI instead. He said the Baltic dry index is irrelevant and our clients care more about equity performances, and I should take out the BDI.

Essentially he wants to lie through my teeth to these people. I don’t know what to do, except know for a fact that, given this guy is one of the top 5 at a firm literally everyone on here knows — and he is considered to be a genius in his field — we are all beyond f–ked.

Haus, my suggestion: get over it, learn to lie. Just don’t ever start believing your own lies.

Surviving in a f’ed up situation sometimes puts the positive aspect of retaining your head above those accrued from a moral fight against the system. Look in history to the example of Sophie Scholl, who (in my armchair quarterback opinion) gave her life in protest, and thereby removed herself from the scene for what could have been 70 years of highly successful subversion and rebellion.

Spitting into the wind isn’t all that noble in the end.

This is essentially what I am doing.

“Yeup, MBS are a great and safe buy. Seriously. It’s different this time.”

I am documenting this via emails to myself. Noting what egregious bulls–t it is, and how I am being forced to do this and by who. No one will hang this around my neck when this whole thing burns to the ground again.

But I guess I gotta keep doing this kinda crap until I can start making some decisions around here — assuming we survive the next “correction” — which I am not sure of.

Hang in there Haus, and give ’em what they want – you don’t need to feel bad. It’s all lies in the end anyway. Stay true in your heart, and live for the remaining righteous things in life. In the days of manufactured existence, righteousness is you producing ‘unmanufactured’ output. Always important to remember that job =/= work. Your work is what defines your contribution and connection to the universe, and it can be entirely within your head.

Keep the original report. Record/note anything he says about it.

Not a joke. 100% serious. You and I were sharing a brain wave length on that one. See my response above.

“The men the American people admire most extravagantly are the greatest liars; the men [and women] they detest most violently are those who try to tell them the truth.” H.L. Mencken (1880 – 1956)

whistleblowers and corporate truth sayers aren’t held in high regard in the corporate world. Save your ammo just to protect yourself.

Yeah I know. With good enough documentation, I’ll be okay.

This kind of stuff was practically unthinkable prior to the rise of Generation-X in the 2000s, as I wrote in my 2008 article, “The nihilism and self-destructiveness of Generation X.”

As readers know, I’ve frequently quoted “experts” on CNBC claiming that stocks are undervalued, even though stock valuation (the P/E ratio) is astronomically high. It’s gotten so common that those guys really have no idea any more whether they’re lying or telling the truth.

In the above comments, Haus-Targaryen writes, “Yeah I know. With good enough documentation, I’ll be okay.” This is very naïve. The comments make it very clear that Gen-Xers do not value the truth, and I know from painful experience and the experience of many others that if you can document the truth, then the Gen-Xers will really screw you. This guy had better keep his mouth shut and do what he’s told, or he’s going to be spending his days writing a blog. ZeroHedge