China builds Navy designed to overwhelm the US Navy 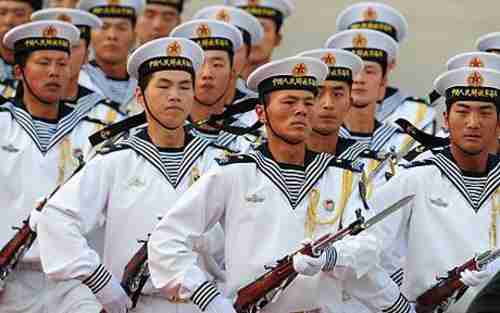 A new report by the US Office of Naval Intelligence reveals a massive naval building program underway in China, with the objective of overwhelming the US Navy.

The heart of China’s current buildup in the PLA(N) (People’s Liberation Army (Navy)) is the YJ-18 supersonic anti-ship cruise missile, with a maximum range of 111 miles at a speed of Mach .08 and a higher speed range of 24 miles.

In the past, we have described China’s DF-21D long-range anti-ship ballistic missile, with the specific capability of attacking and disabling American aircraft carriers. ( “2-Aug-11 World View — China could defeat U.S. in war over Taiwan”) The DF-21D is designed to travel for long distances at high altitudes to the region of the aircraft carrier, and then use heat sensors to detect its current position. China has deployed about a dozen of these missiles, and some (though not all) military analysts believe that an aircraft carrier group could effectively defend against a simultaneous attack of several DF-21Ds.

The YJ-18 presents an aircraft carrier with an entirely different set of problems. The YJ-18 has a much smaller range than the DF-21D, but it is also a lot cheaper to manufacture. As a result, China can produce hundreds of these missiles and then use them for a mass attack on an aircraft carrier. According to one military official: “I’d be more worried about the many dozens of cruise missiles you could have launched at you from nearby submarines and ships than I would about the dozen anti-ship ballistic missiles that might get launched at you.”

While America’s naval fleet has been declining in size, depending on fewer large vessels, China has been producing larger numbers of smaller, more agile naval weapons and missile systems. According to one expert, “Once again we confront the dilemmas of asymmetric warfare. Missiles of all kinds are far cheaper and easier to build than large surface warships. There is probably no air defense system that can reliably fight off a saturation attack launched at a target as large as a CVN [nuclear-powered aircraft carrier].”

Concerns are growing that it will not be long before China’s navy is larger than the American navy, which will be unable to defend itself. Another expert puts it succinctly: “The heart of our navy today is the aircraft carrier, an effective weapon. Almost all of our other surface ships exists to serve it. That works well against third rate navies, but in a fight against a modern naval power, our carrier fleets could not leave port.”

As I’ve been saying for ten years, Generational Dynamics predicts that China is preparing for a massive pre-emptive missile attack on America’s cities, military bases, and aircraft carriers. This might occur next week, next week, next year, or later, This will result in a world war that will pit the West plus Japan plus India plus Russia plus Iran versus China plus Pakistan plus the Sunni Muslim states, with other countries joining in on either side, in a world war that may well last close to a decade. China is preparing for the pre-emptive attack in the belief that they will win the war quickly, which makes Xi Jinping and the Chinese people as stupid as Hitler and the Nazis. History’s greatest disasters are brought about by the stupidest people, and this time the stupidest people are Xi Jinping and Chinese, and those who survive will deeply regret their almost unbelievable stupidity, as they go down in history as worse than the Nazis. Office of Naval Intelligence and Free Beacon and Office of Naval Intelligence

While the Naval Intelligence report on China’s Navy describes China’s plans for massive attacks on American aircraft carriers with hundreds of low-cost supersonic cruise missiles, Philippine fishermen in the South China Sea are already being targeted by the Chinese using a similar kind of strategy.

Philippine fishermen are being harassed more and more by Chinese vessels in fishing grounds that the Filipinos have been using for centuries.

China has been using what the Chinese general Zhang Zhaozhong several years ago called a “cabbage” strategy: assert a territorial claim and then create new facts on the ground by gradually surrounding the area with multiple layers of security, thus denying access to a rival.

In the case of South China Sea fishing grounds, China is sending massive numbers of fishing vessels and patrol boats into other countries’ fishing grounds. Any other country’s fishing vessel is harassed by a variety of techniques — bullhorn warnings, blockades, water cannons, and even violently boarding the ship and dumping its fish cargo overboard. In this way, China expects to take over the entire South China Sea without firing a shot.

According to the spokesman:

Official Chinese vessels in waters near the Huangyan island [the Philippines’ Scarborough Shoal] carried out their duties and managed the relevant waters according to law.

We demand that the Philippine side increase its education and control of its fishermen, and cease all behavior that violates China’s sovereignty and rights and interests.

What Philippines fishermen are learning is that China will use military force to take anything it wants, and that it will not stop any more than Hitler and the Nazis were stopped from annexing Czechoslovakia and Poland.

When I was growing up in the 1950s, I remember asking my mother why the World War had happened. She answered, “Because some people are selfish and want to take things that don’t belong to them.” What the Nazis did ended very badly for everyone, and so will what the Chinese are doing. Reuters and Project Syndicate (Nov-2013) and Philippine Star