As the investigation into the crash of Germanwings Flight 9525 continues, a review of data from the aircraft’s previous flight suggests co-pilot Andreas Lubitz rehearsed his murder-suicide plan.

“Andreas Lubitz repeatedly set the altitude dial on the Airbus A320 to 100 feet while alone in the cockpit en route from Dusseldorf to Barcelona on March 24, investigators at French safety agency BEA found. That flight landed normally in Spain,” reports NBC News.

A former British Airways captain who reviewed the data believes the previous incident was more than just a rehearsal. “My perspective on this is that he was actually thinking of committing suicide on the way out on the outbound flight but changed his mind,” said aviation expert Alastair Rosenschein.

“There is no need for the pilot to practice doing this sort of thing because he knows the equipment fully,” Rosenschein explained. “It’s not a question of ‘if I turn this knob will this happen?’ He already knows all that, he’s a qualified airline pilot so I think it was just that he bottled out of committing suicide on the outbound flight.”

Evidently, the fact that Lubitz never activated the autopilot to execute this descent plan kept it from raising any alarms. CNN reports that Lubitz was “asked to bring the plane down to a lower altitude,” presumably by air-traffic controllers, while he was alone on the flight deck for about five minutes. He entered a suicidal altitude of 100 feet several times before abandoning his plan and settling on a reasonable 25,000 feet. Since he never deviated from the prescribed course, his experiments with the altitude setting were not noticed.

Based on cockpit voice recordings, it appears the captain’s return to the cockpit prompted Lubitz to give up on his suicide plan. When he crashed his plane into the Alps on the next flight, he took care to lock the captain out of the cockpit.

The BBC produced a graph showing how the autopilot altitude settings fluctuated during Lubitz’ five-minute dry run, guaranteed to serve as nightmare fuel for anyone who took that flight, never dreaming that the co-pilot was plotting a crash dive: 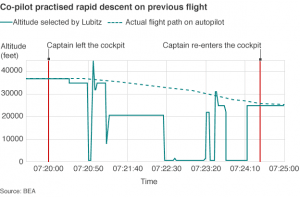 The NBC report also notes that Lubitz was awarded a pilot’s license by the U.S. Federal Aviation Administration in 2010, despite initially submitting medical forms asserting he had no mental disorders, and later refiling those papers to admit he was treated for severe depression in 2008 and 2009.