SINJAR, Iraq– Yazidi men and women are taking up arms and joining the Peshmerga to help in defeating Islamic State, as thousands of refugees continue to take shelter on Sinjar Mountain, ten months after President Obama declared the mountain had evaded humanitarian disaster.

In Sinjar Mountain, there are around 7,000 refugees who are currently living outside of Sinjar City, waiting to move back to their homes. 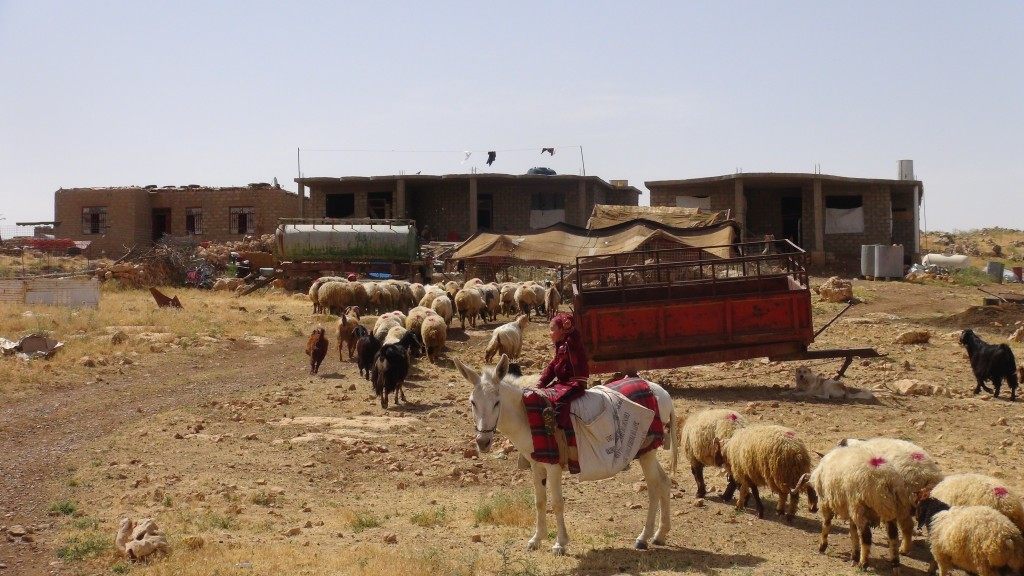 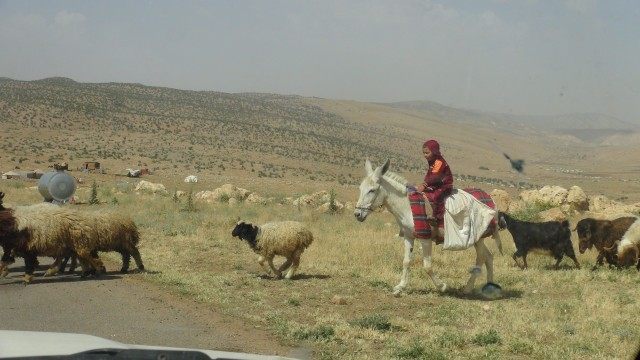 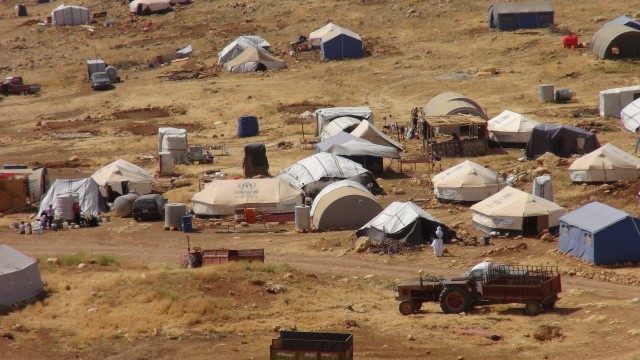 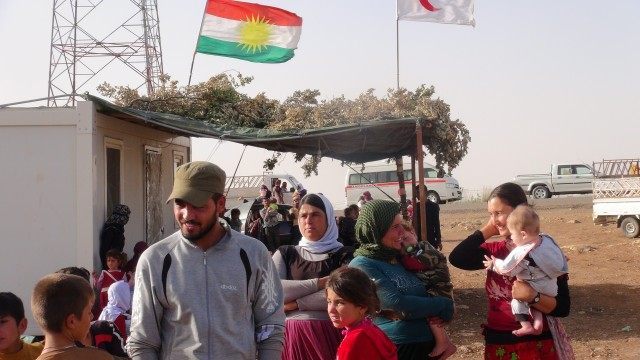 Around 5,000 Yazidi men have joined the Peshmerga after Sinjar City fell to Islamic State last August 2015 to take up arms in defeating Islamic State and defend their people. Many of the Yazidi soldiers have relatives still being held hostage by Islamic State.

Speaking through an interpreter, the Yazidi Peshmerga soldier said, “We will fight or die here until we take our city back,” he said. “We are waiting for an order to retake the city back… The city is my country, it is where I grew up and my home.”

When asked what message he would like to send to America, he stated, “I ask America to send more weapons, more bullets, more equipment. ISIS is not only the problem of Shingal, but a problem for the whole world.”

One young boy stood with the Peshmerga forces overlooking Sinjar City, Islamic State currently holds his uncle hostage, as is the similar story for many of the volunteer Yazidi soldiers whose family members are being held hostage by ISIS. 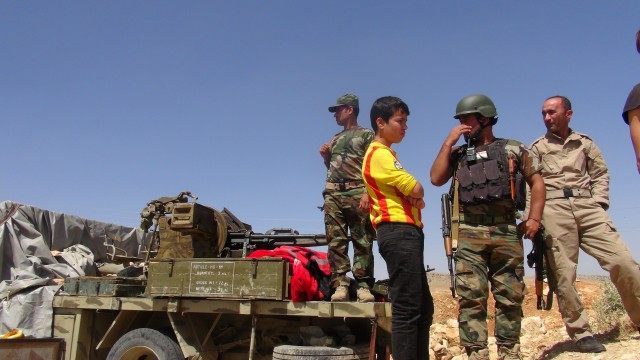 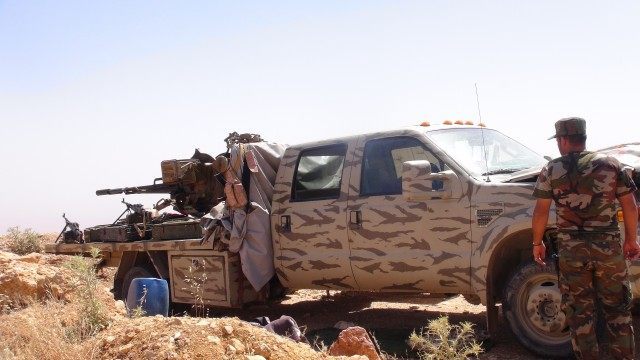 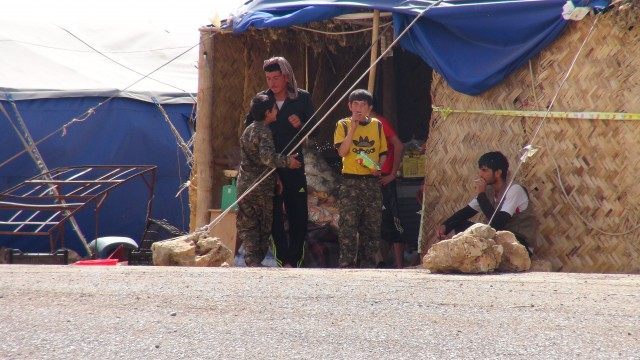 The Sinjar Massacre occurred last August when Islamic State killed 2,000 – 5,000 Yazidi men in Sinjar City and the surrounding area of Ninevah Governate. Thousands of Yazidi women were sold off as sex slaves to members of Islamic State.

Khidher Domle, a Yazidi activist in Kurdistan, spoke about the current condition of the Yazidis and how there are around 2,000 women, children and men that are still held hostage by Islamic State; 1,903 men, women and children have escaped Islamic State and 823 Yazidi women have escaped, he stated.

Khidher speaks with the Yazidi women who are currently being held by Islamic State. He said the majority of the women being held hostage are in Tel Afar, Iraq in the Al-Khadra area, Raqqa, Syria and Al-Shadai, Syria. The second group of abducted Yazidis are at homes with families being used as slaves between the area of Tel Afar and Al-Ba’aj, and Ramadi. The Yazidis being used as slaves work in agriculture from early morning to late evenings, Khidher stated.

Other Yazidi women are working as slaves for individual men, such as Emirs, either forced into hard work or sex slaves. The fourth group of missing Yazidis are living in Islamic State group homes, being used as sex slaves for IS groups. There are around 3-5 women living in each IS home being used as sex slaves. This is occurring mostly in Mosul, Raqqa, Syria, Aleppo and Sed Tishreen, Syria.

He recalled a conversation with a Yazidi woman who was being held hostage by Islamic State. He said the woman stated she was forced to watch Islamic State jihadist torture classes. He said IS forces the Yazidi women to watch how they punish women who try to flee to incite fear into them.

Most of the Yazidi women are being raped, he said. One Yazidi woman was raped 7 times and tried to commit suicide 4 times.

He believes there no hostages or civilians in Sinjar City, only Islamic State. IS controls 80% of Sinjar City and the Peshmerga secure 20%.

“We have asked many times for U.S. airstrikes, but we don’t know why they don’t bomb the area [Sinjar City]. Sometimes we ask for airstrikes around the cities where we know there are Yazidi hostages, especially in Tel Afar and Sinjar but nobody responds,” he notes.

He continued, “It would be very helpful if they bombed around the area of Tel Afar so the Yazidis held hostage can flee to the mountain, but they won’t do it and we don’t know why.”

He said that previous U.S. airstrikes have allowed for Yazidis to escape. “23 people ran away last December due to airstrikes, 7 families ran away another time and 13 at a different time, because the bodyguards fled,” he explained. “Nobody listens to us,” he stated with frustration.

“If they bombed the area in Hamdinia, a Christian area East of Mosul, the Yazidi hostages could flee… We don’t know why the situation of the women being held hostage doesn’t become an excuse to bomb areas. Even they [the Yazidi women hostages] know we know where they are because they call me on the phone and we can track their location,” he said.

When asked about what can be done to help the situation with the Yazidis, he said that the “U.S. could take Sinjar City in 24 hours and the area if they wanted and they should put a small base for observation on Sinjar Mountain… they could control all west of Mosul if they did this.”

“It would help for people to return back to Sinjar City and would bring hope to people in the area that something can be done,” he said.

“The U.S. did a very good job sending humanitarian aid and the airstrikes at the beginning, but then they didn’t continue and we don’t know why,” he asked. “Still we are asking why they started doing good stuff and then stopped. We keep asking why.”

“If they help Yazidis in that area, then it will help all minorities to stay in the country because they will think that there is someone to protect them.”

“We have lost trust with everyone because nobody helps them [Yazidis]… seven months ago, north of Sinjar was liberated but nothing has been done for people to return back. There is no electricity, no health centers, no water, no rebuilding roads… so how will people return back?”

One of the Peshmerga Commanders in Sinjar asked, “why do you allow all these oil tankers and allow ISIS to be resupplied between Syria and Sinjar? Are you [America] serious about this?”

Having spent time on Sinjar Mountain and seeing first-hand the situation, it is frustrating to see thousands of people waiting to return home, living in tents, while Islamic State, America’s enemy, occupies 80% of Sinjar City. U.S. airstrikes and the Peshmerga forces are the only protection available for the thousands of Yazidi refugees still living on the mountain. They are the only thing standing between them and the Islamic State, literally between life and death.

Tera Dahl is the Executive Director of the Council on Global Security.