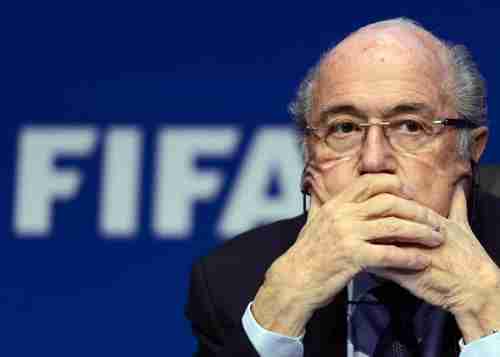 In a new announcement on Wednesday, the FBI said it is investigating the awarding of the 2018 and 2022 World Football (Soccer) Cups to Russia and Qatar, respectively. This follows the Justice Dept.’s indictments last week of nine world soccer officials.

If you are not a follower of world football (soccer), then you may not be aware of the news story that’s consumed international news outside the United States, with 24-hour almost continuous coverage every day, almost wiping out coverage of anything else, including Iraq, Yemen and Ukraine.

According to the Obama administration’s new Attorney General Loretta Lynch:

The indictment alleges corruption that is rampant, systemic, and deep-rooted both abroad and here in the United States. It spans at least two generations of soccer officials who, as alleged, have abused their positions of trust to acquire millions of dollars in bribes and kickbacks. And it has profoundly harmed a multitude of victims, from the youth leagues and developing countries that should benefit from the revenue generated by the commercial rights these organizations hold, to the fans at home and throughout the world whose support for the game makes those rights valuable. Today’s action makes clear that this Department of Justice intends to end any such corrupt practices, to root out misconduct, and to bring wrongdoers to justice – and we look forward to continuing to work with other countries in this effort.

The indictment did not mention FIFA’s controversial president Sepp Blatter, but the indictment came just two days before FIFA was to hold an election for the next FIFA president. Blatter had already been president for 17 years, and was re-elected despite all the indictments. However, when word leaked that he was also being investigated by the US administration, he announced his resignation.

So why the heck is the U.S. Justice Department doing this? Why not the European Union or the Swiss?

Well, FBI director James Comey has an answer to that question:

If you touch our shores with your corrupt enterprise, whether that is through meetings or through using our world class financial system, you will be held accountable for that corruption.

First we had original financial crisis, where thousands of bankers corrupted our world class financial system by knowingly created tens of trillions of dollars in faulty subprime mortgage backed synthetic securities, and knowingly defrauded thousands of investors with them. This triggered the financial crisis and caused millions of people to lose their homes and go bankrupt. But these bankers gave millions of dollars in contributions to the Obama administration, and so the Obama administration has adamantly refused to prosecute even a single one of these criminals.

Because the Obama administration made it clear that no banker criminals would be prosecuted, the same bankers stayed at the same jobs and found a new form of fraud — the Libor scandal. Bankers corrupted our world class financial system by colluding with one another to fix interest rates. According to one banker, “It’s just amazing how Libor fixing can make you that much money.” Those actions cost clients hundreds of millions of dollars.

So bankers knew that they could continue committing fraud with impunity and make billions of dollars, as long as they gave a percentage of that money to the Obama administration.

That brings us to Forex (foreign exchange) fraud, where bankers colluded with one another to defraud their customers making currency conversions from one currency to another. Libor fraud cost clients hundreds of millions of dollars, while Forex fraud cost trillions of dollars.

The interesting thing about the Forex investigation is that the bankers continued committing fraud even after it became public that Forex fraud was being investigated. Why did they do that? Why not? They wanted to make as much money as they could, knowing that they would never be prosecuting. They had a free ticket to commit fraud and keep the money. As one banker was quoted as saying, “If you ain’t cheating, you ain’t trying.”

Two weeks ago, the Justice Dept. fined four banks a total of $6 billion for committing Forex fraud. Just to give you an idea of how much that is, one of the banks, JP Morgan, made $4 billion in the first quarter of this year in just one unit, the commodities unit. So the $6 billion was a tiny fraction of the money that the banks made fraudulently. And NOT ONE SINGLE PERSON was charged for Forex fraud, even though the Justice Dept. knows exactly who the criminals are.

So now the Justice Dept. puts on this big dog and pony show over bringing criminal charges against some foreign officials in the world soccer organization, because they may have corrupted our world class financial system.

As I’ve written many times, this kind of criminality in the administration was unthinkable before the 2000s and the rise of Generation-X. Not only do a sizeable minority of Gen-Xers feel that it’s OK to defraud anyone they want, it seems that a majority of Gen-Xers refused to prosecute crimes.

As I’m typing this, there’s a TV report that street crime and street homicide is at an all-time high in Baltimore, Chicago, and other cities. At the same time, financial “experts” on Wall Street lie about stock valuations frequently, as I’ve documented many times, and no one cares.

And you can be sure that the same bankers who created the phony synthetic subprime backed securities, and who perpetrated the Libor and Forex frauds, are still working at the banks, looking for other ways to defraud people.

The Obama administration is directly responsible for millions of Americans losing their homes or going bankrupt through its failure to prosecute crime. But fear not. The next time you watch an international soccer game, assuming you can afford a TV, you can feel confident that the Justice Department is protecting you. U.S. Justice Dept. and Fox Sports and Reuters and Guardian (London)

FIFA investigation brings the Russia and Qatar awards into question

Here are some political notes related to the FIFA investigation:

Before the US Justice Dept. made the surprise announcements of the indictments against FIFA officials, the big news was that the Palestinian Football Association was going to introduce a motion to expel Israel from FIFA, accusing it of unjustly restricting Palestinian soccer players’ freedom of movement and claiming that Israel’s West Bank settlement teams violate FIFA rules.

However, because of the indictments, the Palestinians were forced to drop their plan.

The Palestinians are expected to try similar actions at the Olympics and other international arenas. Jewish Telegraphic Agency and Washington Post

Speaking at a business meeting in Tokyo, Philippines President Benigno Aquino III suggested that the world cannot continue to appease China as it annexes other countries’ territories in the South China Sea:

If there was a vacuum, if the United States, which is the superpower, says ‘We are not interested,’ perhaps there is no brake to ambitions of other countries.

I’m an amateur student of history and I’m reminded of … how Germany was testing the waters and what the response was by various other European powers.

They tested the waters and they were ready to back down if for instance in that aspect, France said (to back down).

If somebody said stop to (Adolf) Hitler at that point in time, or to Germany at that time, would we have avoided World War II?

So, I say again, America’s rebalancing sends a definite signal that we are all supposed to be living under norms that we agreed upon.

China’s Foreign Ministry pretended to be shocked at the “outrageous and unreasonable” comments by Aquino:

I once more seriously warn certain people in the Philippines to cast aside their illusions and repent, stop provocations and instigations, and return to the correct path of using bilateral channels to talk and resolve this dispute.