Blogger and free-speech activist* Pamela Geller, the initial target of the jihadi beheading plot that later became a plan to murder police officers in Boston, said that she refuses to go into hiding after an ISIS sympathizer disclosed her home address on Twitter.

“I’m a free person and I’m fighting for freedom,” she declared in an interview with CBS News affiliate 1010 WINS in New York, where she lives. “The last thing I’m going to do is go into hiding.”

Geller was targeted on Twitter by a British-born ISIS recruit called Abu Hussain al-Britani, right down to her apartment number, along with the hashtag #GoForth, as in “go forth and kill her.” The jihadi’s Twitter account was soon suspended by administrators.

Geller told 1010 WINS that she has security sufficient to handle the threats against her, for which she reportedly pays some $30,000 per month.

“I will not let violent threats intimidate or silence me,” she said.  “I do not want to die, but I will not live as a slave.”

Just in case you are hesitant to blame Geller for the threats against her own life, CBS helpfully concludes its post on her interview by noting, “According to mainstream Islamic tradition, any physical depiction of the Prophet Muhammad is considered blasphemous, and drawings similar to those featured at the Texas event have sparked violence around the world.”

Funny, it seems like only yesterday the media and their beloved President Obama were assuring us “mainstream Islamic tradition” contains no such prohibition, and all that noise about murdering those who violate sharia law was either a perversion of the pure Religion of Peace by terrorist masterminds, or a clumsy misunderstanding on the part of Muslims who don’t understand their own religion as well as Western liberals do.

Not to mention that, for some, it is supposed to be evidence of “Islamophobia” — i.e. irrational bigotry — to believe Muslims are willing to use violence to impose sharia law upon unbelievers. I’m confused on that point, because liberal political and media culture seems convinced Geller is to blame for jeopardizing her own life by refusing to wordlessly acknowledge this “Islamophobic” believe and stifle herself.

At the moment, Geller and her American Freedom Defense Initiative are attempting to purchase advertising space to publish the winning image from the Mohammed Art Exhibit that was unsuccessfully attacked by jihadis in Garland, Texas. The image is not in any way offensive or controversial, other than its violation of the sharia law Geller does not believe in and refuses to submit to, a speech code completely alien to the legal system of the United States of America.

CBS News somehow forgot to print an image of this cartoon in their report, so allow me to help them correct that little oversight: 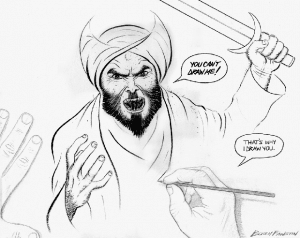 *Anyone who doesn’t like to see Geller identified as a “free-speech activist”: drop me a line when terrorists try to kill you to suppress your free speech, and be sure to include how much you’re spending on security per month to continue exercising your First Amendment rights. The refusal to comply with speech codes enforced by violence is the paragon of free-speech activism. Agreement with the speech in question is not necessary to acknowledge that fact.