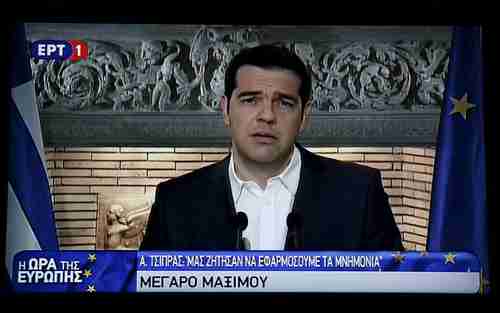 Members of the Eurogroup of eurozone finance ministers on Saturday unanimously rejected a demand to grant a 2-month extension to the existing bailout program, after Greece’s government walked out of the negotiations.

Early Saturday morning, Greece’s prime minister Alexis Tsipras surprised everyone, even members of Greece’s negotiating team, by tweeting that he was ending the negotiations and calling for a snap referendum of the Greek people on July 5 to determine whether to accept the Eurogroup’s bailout conditions. This would be the first time Greece has held a national referendum since 1974.

I call on you to decide whether we should accept the extortionate ultimatum that calls for strict and humiliating austerity without end, and without the prospect of ever standing on our own two feet, socially and financially. We never considered giving in. … These [Eurogroup] proposals prove that certain partners are not interested in reaching a viable and beneficial agreement for all parties, but rather the humiliation of the Greek people.

The parliament approved the referendum in a vote late Saturday night. However, many people are saying this referendum, if it is held, would really be a historic vote on “Grexit,” whether Greece should remain in the euro, or even in the European Union. One commentator quoted an anonymous Eurogroup official as saying, “Tsipras is like a cowboy who walks into a saloon, takes his gun out of his holster, points it at his own head, and shouts, ‘Do as I say or I’ll shoot!'”

Tsipras’s announcement was a complete surprise to the Eurogroup members, since they had been negotiating almost 24 hours a day all week, and there had never been any mention of a referendum. The Eurogroup members were said to be furious at Tsipras’s betrayal. They met again without Greece, after Greece walked out, with the stated purpose of making plans to guarantee that the rest of the eurozone would not be hurt by Greece’s actions and possible default or Grexit.

German minister Sigmar Gabriel said: “There must be a clear program. And what he (Tsipras) would like – for Europe to send €20 or €30 billion in aid programs to Greece, but without any conditions – Europe cannot accept.”

However, many European officials say that they stand ready to negotiate if Greek officials change their minds. According to Germany’s finance minister Wolfgang Schäuble:

We have no basis for further negotiations. Clearly we can never rule out surprises with Greece, so there can always be hope. But none of my colleagues with whom I’ve already spoken see any possibilities for what we can now do. […]

We decided today that we will not extend the second program. We did not decide to end the euro zone membership of Greece.

As I have been saying for weeks, the logic of the Game of Chicken is that there will be no deal until one minute to midnight on June 30, when a 1.5 billion euro debt payment is due to the International Monetary Fund (IMF). One angle is that if Greece misses the June payment, then the IMF has the choice of calling it a default, or just saying that Greece is “in arrears,” and give them another month. But after Greece walked out of the talks, Eurogroup members apparently are now expecting Greece to default. Kathimerini and AFP and Guardian (London)

Greece’s chaos may begin as early as Monday

Greece’s people are close to panic, wondering what will happen next week, even on Monday. There were long lines on ATM machines on Saturday, since many Greeks do not feel confident that the banks will even be open on Monday.

One question that the Eurogroup left open on Saturday was when the Emergency Liquidity Assistance (ELA) program would be terminated. The ELA is money that the European Central Bank (ECB) has been supplying to the Greek banking system, as Greeks have withdrawn billions of euros in the last few weeks. On the day that the ELA is terminated, severe capital controls will be implemented, meaning that withdrawals will be limited to a small amount each day. Some banks are already setting limits.

Another question on everyone’s mind is this: If the referendum is held on July 5, exactly what will the Greeks be voting on, inasmuch as the Eurogroup has announced that the entire program will end on at midnight on Tuesday, June 30? Will they be voting on some bailout deal, or will they be voting on their entire future in Europe?

Since Alexis Tsipras and his far left Syriza government came to power in January, he’s added public employees, increased taxes on businesses, and refused to touch the retirement age.

As I’ve said many times in the last few years, no solution exists for the Greek debt problem, and that’s why no solution has been found, or will be found. But even if some kind of deal can be agreed on, presumably at one minute to midnight on Tuesday, all it will do is kick the can down the road for a few weeks. The deal under discussion is for the last €7.2 billion tranche of the second bailout loan. Greece needs a third bailout loan, and that will begin negotiations all over again in a few weeks, something that is so painful, both sides are wondering whether it’s worth it.

The long-suffering Greek people are watching all this drama and are pretty sure of only one thing: That things are about to get a lot worse. Irish Times and Reuters and Bloomberg and Kathimerini

Tunisia will close 80 mosques that are ‘spreading venom’

Tunisia’s Prime Minister Habib Essid accused 80 mosques of “spreading venom,” and announced that they would all close, as part of a clampdown on security. This follows Friday’s terrorist attack on a beach in the Sousse holiday resort in which 38 people were killed.

Many Tunisians are demanding to know why stronger security measures weren’t taken after the March terrorist attack on a museum in the capital city Tunis. ( “19-Mar-15 World View — Beneath the surface, Tunisia is a terrorist breeding ground”)

As I wrote at the time, some 3,000 Tunisians have traveled to Iraq and Syria to join the Islamic State (IS or ISIS or ISIL or Daesh), more than any other country in the world, and Tunisian preachers are extremely skillful at convincing young men to join ISIS. So the charge that some Tunisian mosques are “spreading venom” is widely believed.

However, many analysts question how effective closing mosques will be. According to one analyst, the closures will end up creating a two sets of mosques:

“You will have a parallel religious sphere where people don’t go to the mosques because they think the mosques only tell us what the state would like us to hear, so they go to private meetings. Once you have this parallel market, radical ideas can spread much more quickly, because you have no control.”

Nonetheless, after Friday’s terrorist attack, one of the worst in decades, people are going to be demanding that the government “do something.”

As I’ve been writing for years, nationalism and xenophobia are increasing in country after country as the World War II survivors die off, as the generational Crisis era deepens. We’ve seen this in story after story — Russia’s xenophobia towards Caucasian Muslims, Europeans toward Jews, Roma and Muslims, Chinese towards Americans and Japanese, Sunni and Shia towards each other, and so forth. Note that Generational Dynamics does not make a moral judgment about these trends, any more than a weather forecaster makes a moral judgment about an approaching rainstorm. But Generational Dynamics predicts that this nationalism and xenophobia will continue to increase in country after country, and lead to World War III. This global increase in xenophobia and nationalism is a trend that cannot be stopped, certainly not be closing a few dozen mosques. CS Monitor and BBC