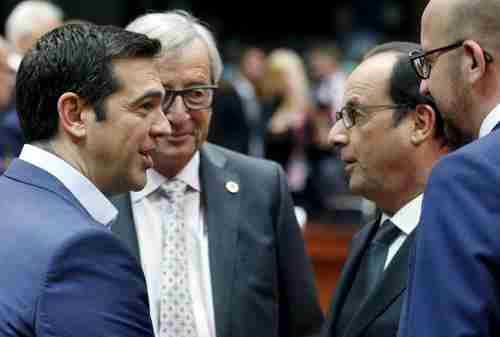 With Greece almost out of cash, Eurogroup members are split into two sharply divided factions, the hardline group led by Germany, and the anti-German group led by France.

Saturday’s Eurogroup meeting of eurozone finance ministers ended abruptly late at night after Germany’s finance minister Wolfgang Schäuble got into a loud shouting match with Mario Draghi, the head of the European Central Bank (ECB). The nature of the fight was not reported, except that it ended with Schäuble shouting “I’m not stupid!”

However, Greece’s credibility is so low, after months of lying and evasion, that even its supporters have to demand some kind of proof that Greece will meet its commitments. Germany is demanding that Greece meet certain conditions by Wednesday, or else the solution will be a “temporary Grexit,” meaning that Greece leaves the eurozone for a period of time up to five years. However, France is opposed to any “Grexit” plan.

A political commentator on the BBC said that France and Italy, along with the European Commission, are against the hardline position that the Germans are taking. However (my transcription):

But the number of people who fall into what you might call the German camp is large and is growing. It includes in particular all of the central and eastern European countries that are in the euro, Finland, the Slovaks, the Slovenes, the Baltic states. The Spanish and the Portuguese have been quite tough on the Greeks. So my guess is that whatever emerges is probably going to be a little bit closer to the German line than to the French line, but I think we’re probably NOT going to see this idea of a temporary Grexit, because there are alternatives.

The popularity of France’s president François Hollande has been plummeting in the last year. He hopes to improve his approval ratings by taking the anti-German side in the Greece debate, but that is causing political controversy within France itself. According to former president Nicolas Sarkozy: “We need Hollande to get his act together and restore unity with German Chancellor (Angela) Merkel.”

There is one thing that seems increasingly clear: That the move two weeks ago by Greece’s prime minister Alexis Tsipras to call a referendum has backfired in the sense that it made it much harder to reach an agreement. In particular, Greece’s economy has deteriorated significantly in the last two weeks.

The Greek people are very resilient, and they will do well whatever happens. But there is a great deal of sadness internationally over the suffering that will occur in Greece no matter how the next few days unfold.

The European Union leaders summit that had been originally scheduled for Sunday was canceled because of the bitter Eurogroup split. AFP and Reuters and Kathimerini

Eurogroup imposes harsh demands on Greece to remain in eurozone

A document containing the Eurogroup conditions to keep Greece in the eurozone has been leaked. The demands of Greece are harsh, but there are many sections of the documents that are in square brackets, indicating that the Eurogroup ministers could not agree on that section.

The document requires that the proposals be implemented by passing legislation in Greece’s parliament by Wednesday, a feat that Greece’s prime minister Alexis Tsipras may not be able to accomplish in a short time frame.

Some of the demands are as follows:

The Eurogroup ministers are referring to these demands, including the three-day ultimatum, as a “trust building exercise.”

But the Greek people, already torn between fear and fatalism, are furious at the new demands, calling them Germany’s plan to humiliate Greeks and Greece. Many Greeks are pointing out that Germany had half of its debt forgiven after World War II, and one of the countries that forgave Germany’s debt was Greece.

The next three days will be very stormy. Kathimerini and AFP and Reuters

China police crack down ahead of another volatile week in stocks

China’s regulators took extraordinary measures last week to slow the fall of the plummeting stock market, and apparently succeeded on Thursday and Friday, when stocks rebounded 10%, after falling 30% since June 12.

As of Friday, trading in about 1,400 firms – nearly half of the total traded on the Shanghai and Shenzhen exchanges – was suspended in order to prevent further bloodletting. By Sunday evening, about 260 had announced they would resume trading on Monday, raising fears of a new slide.

Meanwhile, in an effort to pin the blame on someone for the stock market slide, China’s Ministry of Public Security has launched a task force to investigate “malicious short-selling.” This refers to illegal practices such as spreading rumors to induce panic selling, taking advantage of inside information to dump shares before others, colluding with other institutions in bulk share sell-offs to send down prices, and churning – selling and buying the same shares at affiliated accounts to rig prices. Market manipulators could face up to 10 years in prison and heavy fines.

Beijing police said on Sunday that they had detained a 29-year-old man for spreading rumors that a person had jumped off a highrise in Beijing’s Financial Street after incurring heavy losses in the stock market. Police claimed that the picture and video posted online were actually of a man falling off a building in east China’s Jiangsu Province, and the cause is still unknown. China News Service and South China Morning Post